Story from Celebrity Style
Fresh from his knockout (and rather emotional) win at Wimbledon on Sunday, Andy Murray has revealed the secret to his sucess. Care to guess what his pearls of wisdom are? It's all about being a good loser. Yes, really.

After his win, Murray spoke out, revealing that it was the agonising defeat to Federer last year that he believes was the turning point of his career, giving him the drive and ambition to swing and volley extra hard for the title this year. Speaking to the BBC, he said, “Wimbledon last year was the hardest loss of my career. I was emotional afterwards and I responded really well. I don’t know why that was, I don’t know if it was a maturing process or just a release maybe, but I responded really well and as soon as I was back on the practice court I felt really good about my game and hadn’t felt like that just prior to that.” If that's the case, then boy, are we glad he lost last year. So, what's next for the Scot? “I need to try to improve and use this as a springboard to try and get better. Will I win another slam? I don’t know — I’ve just got to keep working hard, enjoy this and then get back to work.”
(The Times) 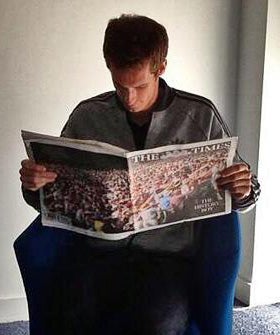 Photo: Via The Times.
Style
31 Looks To Jumpstart Your Summer Style
by Eliza Huber
Style
27 Black Influencers That You Should Be Following
by Eliza Huber
Style
Sophia Bush Is Selling A Look From One Of Her “Absolute Fav...
Like many of us, Sophia Bush is using her free time in quarantine to Marie Kondo her wardrobe, but, unlike the items gathering dust in the back of our clos
by Eliza Huber
Style
Hailey Bieber’s Reformation Dress Is Perfect For Summer — &...
This year Memorial Day Weekend wasn’t all parades and barbecues like we’re used to, but, even with the change of plans, Hailey Bieber found not one, bu
by Eliza Huber
Style
Here’s What Your Favorite Celebrities Wore During Memorial ...
by Eliza Huber
Style
7 Meghan Markle-Approved Fashion Brands That Are Also Affordable
by Eliza Huber
Style
Olsen Twin Sets The Bar For Social Distancing Style
From their pastel-colored lenses and bandanas circa 2000 to the black shapeless frocks they’re known for today, the Olsen twins have been our style icons
by Eliza Huber
Style
Meghan Markle’s Go-To Dress Is 50% Off At Nordstrom
We’ve learned every TikTok dance, box-dyed our hair pastel pink, and watched all 12 episodes of Normal People — twice. Next on our list of distractions
by Eliza Huber
Fashion
Villanelle Is A Carrie Bradshaw For Our Disillusioned Generation
Sex and the City’s Carrie Bradshaw walked so Killing Eve’s Villanelle could run. Sure, Bradshaw can be considered a predecessor to many of TV’s antih
by Cait Munro
Style
Meghan Markle Just Gave This ‘90s Jewelry Trend Her Stamp Of Appr...
Summer is almost here, and with it, comes all of our favorite kitschy, nostalgic accessory trends: seashell jewelry, fruit-shaped handbags, rhinestone-crus
by Eliza Huber
Style
Here’s What You Would’ve Seen On The Met Gala Red Carpet Last Night
by Eliza Huber
Celebrity Style
Meghan Markle’s Baseball Cap Marks The Beginning Of A New Era
It’s only been a month since Meghan Markle and Prince Harry swapped out their Sussex digs for a house in the Hollywood Hills, but they already look like
by Eliza Huber
Discover
R29 Stories & News
Watch
R29 Original Series & Films
Shop
R29's Most Wanted