Skip navigation!
Story from Politics
For a person whose job is to edit — editor-in-chief Franca Sozzani doesn't seem to have much of a filter when it comes to giving interviews. From her quick defense of John Galliano immediately after his meltdown to her blog post about the "disease" of fashion bloggers, Sozzani is at once refreshingly candid and embarrassingly out of touch, which has contributed to such revolutionary moves as EIC of Vogue Italia like acting as ambassador of nonprofit Fashion 4 Development and handpicking Steven Meisel, Tim Walker, and Ellen von Unwerth when they were unknown photographers, as well as publishing those now-infamous "slave earrings."
Advertisement
Her paradoxical POV was really examined in a recent interview given to Fashion Telegraph. Throughout, she gives some highly quotable opinions about creativity, authenticity, and feminism that are oftentimes genius and sometimes contradictory:

On feminism:
"I think women are sometimes much more clever than men because we are used to doing many things at the same time — mother, maker, boss, wife. But I don't think that by saying I'm a feminist you change the world. It's by behaving like a feminist. I want to protect other women who can't stand up for themselves. But at the same time it seems a lot of women behave stupidly because they only want to get married and have kids and have a rich man and beautiful clothes. These women do not deserve anything from me."

On the fashion elite:
"There is no man who wants to be with a ridiculous woman. It's only the fashion crowd. They dress to be portrayed by bloggers and street style [photographers]. It became a fashion to be outrageous. We are not celebrities. We are people who work as a messenger, to fashion and readers.
We should not become our stars. And anyway, if you become [a star] it is because of what you do, not because you dress this way or you wear these glasses or you have this bag. That's not the point."

On creativity:
"Sometimes, yes, I think I am crazy. Why did I do something like that? But at the same time I do not regret it. When you see that you have made wrong, you just have to go on, to try again. […] I cannot live without dreams. If you have a big dream you can make it. So you have to dream on a big scale. Martin Luther King said that he dreamt one day his kids would be appreciated for their character, their knowledge, not the color of their skin. Forty years later we have a black president. So you have to think and fight for the big things. The dreams should be huge. Of course you can dream to have a bag, but that's a small dream." 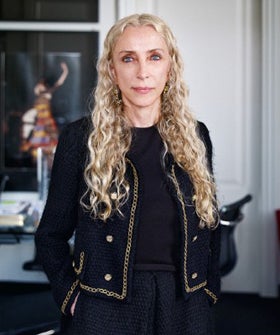 News
For His Final Act, Trump Plans To Have 5 Federal Prisoners Executed
Fifty-six days out from the inauguration of President-elect Joe Biden, Donald Trump’s Department of Justice announced that it will do something unprecede
by Britni de la Cretaz
2020 Election
Of Course Trump’s Team Wants To Hold A “Public Hearin...
As a treat, on the day before Thanksgiving, members of the Trump administration planned to head to Gettysburg, Pennsylvania for a hearing on unproven elect
by Britni de la Cretaz
News
“I Keep It Off My Nose”: Inside The Twisted Logic Of ...
While there’s still a lot we don’t know about the coronavirus, we’ve learned a few key facts since it hit the U.S. early this year. Chief among them
by Natalie Gontcharova
News
No, Trump Can’t Pardon Himself — Here’s Why
Donald Trump’s presidency is finally coming to an end. But one important question — other than whether Trump can run again in 2024 — is whether he is
by Sarah Midkiff
News
Rep. Nikema Williams Reveals Her Own History Of Making “Goo...
Many profiles of Georgia Representative-elect Nikema Williams remind readers of the gargantuan shoes she has to fill as she takes on the late John Lewis’
by Audra Heinrichs
News
A Black Transgender Woman Is Suing The Georgia Prison System For ...
Following allegations of mistreatment, Ashley Diamond, a Black transgender woman, is suing the Georgia Department of Corrections for sexual assault by both
by Elly Belle
News
No, Jake Tapper, Rashida Tlaib Is Not Antisemitic For Criticizing...
After implying that Congresswoman Rashida Tlaib is antisemitic on Twitter, CNN’s Jake Tapper is now being slammed for his bad faith comments. Following n
by Elly Belle
Donald Trump
Trump’s Retweets Of Randy Quaid Prove That Everything’...
We’re no expert, but a lot can be gleaned about where someone’s head is at based on what they like and retweet on Twitter — particularly if you are,
by Sarah Midkiff
News
Can We Please Stop Comparing Electoral Politics To Sex?
Discussing politics has often involved the use of, let’s face it, boring comparisons. Whether it’s chess or football or a relay race, political talking
by Danielle Campoamor
News
Reminder: Trump Once Accused A Thanksgiving Turkey Of Refusing To...
While it’s hard to speak positively of anything that happened in 2020 — the year of doom — one thing remains true: the internet has been so good to u
by Asia Ewart
News
Can COVID Affect Your Brain’s Functionality?
On Friday, news broke that Donald Trump Jr. (informally known as President Trump’s second-favorite son) tested positive for COVID-19 — and he is no
by Danielle Campoamor
News
Ted Cruz Dared People To Come For His Turkey, Instead Twitter Cam...
Just when you think Ted Cruz — one of perhaps the most universally mocked Senators in America — is taking a break from putting his foot in his mouth fo
by Asia Ewart
Discover
R29 Stories & News
Watch
R29 Original Series & Films
Shop
R29's Most Wanted