Skip navigation!
Story from Celebrity Style
Sure, Anna Wintour doesn't say much. She's been known to Tweet (on one occasion), but it's not every day we get a sneak peek into the inner workings of the world's most well-known fashion mag. Lucky for us fans, though, there's Kirstie Clements — a former editor of the magazine's Australian edition. After being, erm, let go from her position as editor-in-chief in 2012, Clements has published a tell-all memoir called The Vogue Factor, and you can bet it's juicy.
Clements maintains the book is not about getting revenge; rather, it recounts the daily life and inner workings of a magazine as experienced by its head honcho. There are parties, there are front row seats, there are perks beyond perks — but, as always, there's a dark side. She talks about models who regularly require hospital drips, and others who endure three-day photoshoots without a single meal. And, not surprisingly, the same standards that lead to such extremes apply to the editors, as well. In a world where Anna Dello Russo and Carine Roitfeld are regular fodder for industry arbiters of cool like Olivier Zham and Scott Schuman, Clements describes editors' dinners and conferences as "every woman’s worst nightmare" (though she somehow managed to stay pretty down-to-Earth through it all). And though her book isn't spiteful overall, she does express some serious doubts about the female ideals pushed by the magazine, saying that some of the couture gowns they received for photoshoots were so small, "they resemble christening robes." She goes on to explain that, on the subject of extreme dieting and anorexia, she "felt complicit...in my experience it is impossible to get a photographer or a fashion editor to acknowledge the repercussions of using very thin girls. They don’t want to. For them, it’s all about the drama of the photograph. They convince themselves that the girls are just genetically blessed, or have achieved it through yoga and goji berries."
Advertisement
And on the subject of the mysterious Ms. Wintour, Clements has plenty to say. "On the few occasions we were introduced," she says, Wintour's "sense of froideur was palpable. The deference she commands from people is astonishing to watch. There appears to exist some kind of psychological condition that causes seemingly sane and successful adults to prostrate themselves in her presence." All told, it was a harrowing 13 years for Clements — but she seems to have come out of it unscathed, and well-adjusted. And while it can't feel good to see your magazine change hands (Vogue Australia was acquired by Rupert Murdoch's News Unlimited shortly before her termination) and your job disappear to boot, with this juicy book on the market, we doubt she'll be hankering for a paycheck any time soon. (The Daily Mail) 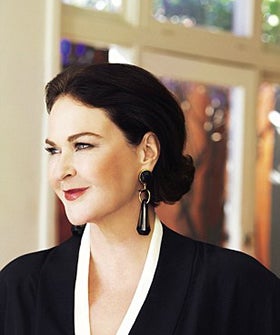 Image: Via The Daily Mail.