Skip navigation!
Story from Celebrity Style
UPDATE: Us Weekly confirms that a healthy baby girl has indeed been born. TMZ's hilariously Photoshopped image is an excellent indication of the media frenzy about to ensue.
We've just received news that Kim Kardashian's baby daughter has premiered early, and is reported to be on its way into the world, by way of Beverly Hills' Cedar Sinai hospital. We do not recommend Torrenting this baby, and obviously this baby will not be available on Megavideo. Def Jam's in-house leaks department is on the case, and sources suspect that the leak may have originated some nine months ago, before the public was even aware of its existence. Kanye has previously stated that he gives "no f*cks at all" about leaks, and therefore we assume that of the around 100 media professionals invited to the baby listening party in the Milk Studios birthing suite, 99% of them will be taking videos and audio.
Advertisement
Stay tuned for updates. (Buzzfeed) 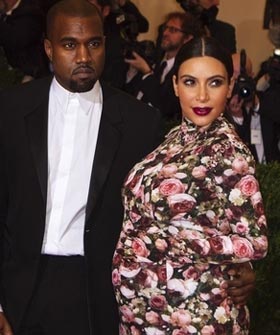 Style
Jill Biden’s Valentino Tote Featured Her Dogs Champ & Major On It
Last week, while boarding a plane in Colorado Springs, Dr. Jill Biden was photographed with a brown Valentino bag. As pointed out by CNN White House Corres
by Eliza Huber
Style
Kat Dennings’ Three-Stone Engagement Ring Is A Stunner
Love is in the air. In the last 10 days alone, three celebrities have announced their engagements, starting with Tallulah Willis last Tuesday, followed by
by Eliza Huber
Style
No One Played It Safe On This Year’s BRIT Awards Red Carpet
by Eliza Huber
Advertisement
Style
Naomi Osaka Wore A Wedding Dress From ASOS — & It’s Still Available
Last week, four-time Grand Slam singles winner Naomi Osaka took home yet another title, at the 2021 Laureus World Sports Awards where she was named Sportsw
by Eliza Huber
Style
Michelle Obama Knit Halter Tops For Malia and Sasha During Lockdown
For everyone who took up knitting during the pandemic, only to be mocked by their close ones — think: wisecracks about Meredith Grey celibacy knitting an
by Eliza Huber
Style
Sophie Turner’s Oversized Blazer-Heels Look Hits On Two Of ...
For her first Mother’s Day, Sophie Turner, who gave birth to her daughter Willa in July, celebrated on both Saturday and Sunday this weekend. On the eve
by Eliza Huber
Style
J.Lo Just Wore The Robe Version Of The Jungle Print Dress
On Mother’s Day, Jennifer Lopez reminded her daughter just how cool a mom she is by reinventing one of fashion’s most iconic outfits: the Versace j
by Eliza Huber
Style
Kate Middleton Rewore Her Engagement Blouse More Than A Decade Later
A week after the Duke and Duchess of Cambridge celebrated their 10-year anniversary with a handful of family activities — during which Kate Middleton mad
by Eliza Huber
Style
Ashley Graham’s Latest Look Is A Lesson In Gym-To-Lunch Sty...
After a year of exercising at home, we’re faced with a dilemma we haven’t dealt with in some time: what to wear post-workout when you don’t have time
by Eliza Huber
Style
Hollywood Reporter Names Law Roach 2021’s “Most Powerful” ...
The only person capable of outshining both Zendaya and Anya Taylor-Joy in the fashion department is the Image Architect behind their looks, Law Roach. And
by Eliza Huber
Style
Tallulah Willis’ Engagement Ring Proves That This Trend Isn...
On Tuesday, Tallulah Willis and Dillon Buss announced that they are getting hitched. Willis, the youngest daughter of Bruce Willis and Demi Moore and the f
by Eliza Huber
Style
Katie Holmes Wore A Knit Dress With Spring’s Biggest Shoe Trend
On Monday, Katie Holmes was spotted running (literally) through New York City while filming a scene for her upcoming movie, The Watergate Girl. While the o
by Eliza Huber
Advertisement
Advertisement
Discover
R29 Stories & News
Watch
R29 Original Series & Films
Shop
R29's Most Wanted