Skip navigation!
Story from New York
Scalpers, trademark infringement, and back-alley trading: it's your weekly cronut update. Ever since the crunchy confection hit NYC last month, the city has been on an ever-growing sugar high, and it's only getting crazier.
First, entrepreneurs started hawking their services on Craigslist, waiting in line and delivering cronuts for up to 40 bucks a pop — see the CRAZY ads below. Then, a new flavor (maple-lemon glaze) arrived and the lines got even longer. What usually happens when a high-end item becomes a national trend? The knock-offs come next. 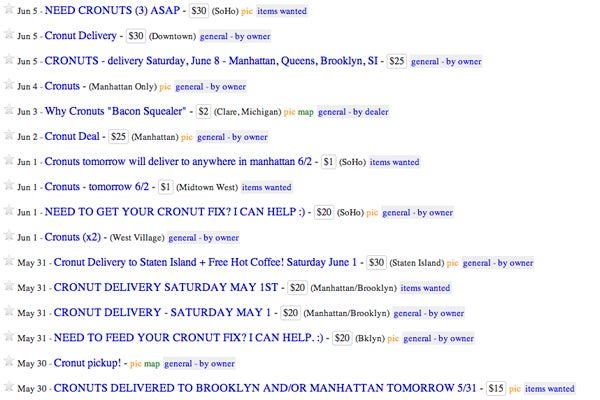 All over the world, bakeries have begun to roll out their own not-exactly-cronuts to feed the curious masses: From the "doissant" in Washington, D.C.'s Chocolate Crust bakery, to the MoVida Bakery in Melbourne, Australia (they're still deciding between “croisnut” and “crodough.") Though Dominique Ansel wisely trademarked the original moniker, he's fine with imitators taking a whack at their own recipes.
Advertisement
And you might just be stuck trying one of the knock-offs, since Ansel has also been forced to limit the amount of cronuts sold at one time. Last week, you could buy six, but, with the onslaught of scalpers lurking outside his doors before dawn, that number has dropped to two per customer. Still, that hasn't discouraged go-getters from padding their incomes by selling cronuts on the side. One construction worker told the HuffPo he planned to clear $120 by re-selling his allotment. He adds, "Tomorrow, the price is double." (Huffington Post) 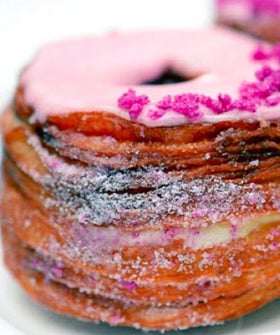 Most Wanted
Clink, Clink: We Found The Best Drinking Glasses For Spring
Whether you’re a mocktail mixer who only sips inside with the AC blasting or a wine enthusiast who pairs every bottle with an al-fresco breeze, the n
by Alexandra Polk
Food & Drinks
Hot Sauce Enthusiasts: Get To Know The “Freaky Flavors̶...
The hot sauce folks who get it, get it. NPR reported back in 2012 that people who love the spicy sauce tend to be more adventurous and thrill-seeking, and
by Jinnie Lee
Food & Drinks
This Plant-Based Meal Delivery Service Taught Me To Love Veggies
I always think of April — a.k.a. the month that ushers in “spring cleaning” as a means to start anew — to be an opportune time to reassess,
by Jinnie Lee
Advertisement
Food & Drinks
Gifts For Moms Who Love Food As Much As We Do
by Marshall Bright
On-Site Shopping
The New York City Coffee Shop That Brews Gender Equality & Gives ...
You’re reading an On-Site Shopping story — meaning you can browse, add to cart, and actually purchase the product recommendations featured be
by Kate Spencer
Guide To Wine
This Stylish, Single-Serving Organic Wine Won’t Go To Waste
I live alone. And let me tell you: it is extremely difficult to manage grocery portions for a party of one. Just take it from the trail of half-eaten bags
by Alexandra Polk
Most Wanted
The Best Prepared Meal Delivery Subscriptions, Reviewed By A Pick...
Prepared meal delivery services can be a godsend. Whether you’re a burnt-out WFH workaholic, a busy parent, a stressed-out student, or you’re s
by Mercedes Viera
Tried & True
This Berkey Water Filter Has Changed My Life
The idea to invest in an “expensive” water filter system came shortly after my two consecutive trips to Los Angeles last fall when I noticed se
by Jinnie Lee
Chocolate
Wondering Where To Buy Hot Chocolate Bombs This Valentine’s Day? ...
by Alexandra Polk
Best Coffee
Here’s 50% Off A Cool & Customizable Cold-Brew Subscription
Cold brew rose to fame throughout the 2010s with devotees swearing by apparent ability to deliver morning jitters-levels of caffeine minus any extra acidit
by Alexandra Polk
Food & Drinks
The 27 Best Online Bakeries For Ordering Valentine’s Day Tr...
by Brianna Arps
Chocolate
These Chocolate Gift Boxes Are A Valentine’s Day Treat, Not A Trope
by Alexandra Polk
Advertisement
Advertisement
Discover
R29 Stories & News
Watch
R29 Original Series & Films
Shop
R29's Most Wanted