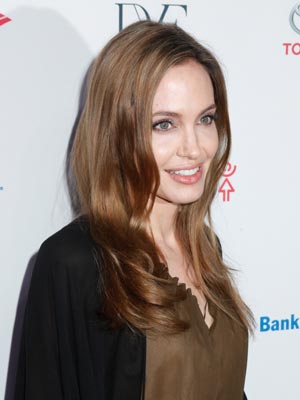 Though she definitely had her rebellious years, Angelina Jolie isn't one to open up her private life for the sake of publicity — though her efforts as a humanitarian activist are ongoing, she's not on the cover of tabloids every week to talk about it. She does her thing, quietly, and we've always respected her for that. And that respect grew quite a bit as we read an article she penned for The New York Times last night for the Op-Ed section. Titled "My Medical Choice," the brief but moving article tells the story of her mother's death from breast cancer — and her own recent decision to have a preventive mastectomy.
Advertisement
Jolie has known for years that she carries the same defective gene that killed her mother at 56, and left her with an 87% chance of developing breast cancer. "Once I knew that this was my reality, I decided to be proactive and to minimize the risk as much I could. I made a decision to have a preventive double mastectomy," she writes. Through a series of surgeries, beginning with a special procedure to increase the chance of saving the nipples before breast tissue is removed and ending with implants, she eventually got to a place where she can safely tell her children that she will be there for as long as possible, "just Mommy," the same as she always was. And as for those politically, sexually, emotionally-charged symbols of womanhood? "I feel empowered that I made a strong choice that in no way diminishes my femininity."
This is a story about fear and strength, about partnership in the face of adversity. We can't say it better than Jolie herself, so we highly recommend you click over and read the full story. All we can do is applaud her for using her position as a notable figure for good (though it's not the first time). This can't have been easy, but her choice to tell this story publicly will hopefully encourage even more women to, as Jolie puts it, "take control" of their health early, and employ all options available. (The New York Times)

Horoscope
Feeling Spontaneous? That’s Just Mars In Aries
Honey, Mars is home. The Planet of Action, Drive, and Desire is finally entering into its all-time favorite sign after a two-year hiatus — in other words
by Elizabeth Gulino
Abortion Access For All
‘I Needed Those Years To Grow.’ 5 People On How Abort...
Democrat-blue balloons and bawling women — that’s what El Sanchez thought of immediately when they first learned of the Supreme Court draft opinion th
by Molly Longman
Abortion Access For All
Will Our Phone Data Be Used Against Us In A Post-Roe World?
As if people with uteruses didn’t have enough to worry about since the leaked Supreme Court draft opinion that signaled the end of Roe v. Wade, more info
by Molly Longman
Advertisement
Somos Latinx
I’m Still Unlearning My Internalized Ableism as a Fat & Dis...
Relaciones is a monthly series that helps Latinxs navigate interpersonal and intrapersonal relationships by unpacking the tough but necessary conversations
by Yesika Salgado
Horoscope
This Gemini Season Is A Breath Of Fresh Air
There’s a vibe shift coming — astrologically speaking, that is. On May 20, the Sun will leave its spot in stubborn Taurus and enter into the sociab
by Elizabeth Gulino
Most Wanted
The Best Suction Vibrators, According To A Sex Therapist
Suction sex toys defy everything you’ve come to expect from a vibrator. For starters, powerful thrusts and pulses are replaced with targeted waves of
by Karina Hoshikawa
Horoscope
An Alluring New Astrology App With Celestially Precise Insight
Calling all star signs, from the astro-curious to the straight-up celestially obsessed. A new phone app has crash-landed into this universe, and Hint is he
by Chichi Offor
Horoscope
The Lunar Eclipse In Scorpio Will Help You Harness Your Inner Cou...
Total Lunar Eclipse. Just saying the words out loud feels like an invocation. The way that “total” is a kind of promise, an envelope the moon slips int
by Gala Mukomolova
Horoscope
Your Horoscope This Week: May 15th to May 21st, 2022
by Gala Mukomolova
Dedicated Feature
Yes, My Emotional Support Object Is My Water Bottle
Yes, the rumors are true. I — a 28 year-old woman with a full-time job, a solo car insurance policy, and not one but two gym memberships — still sleep
by Emma Turetsky
Can We Talk?
I Set Boundaries With My Racist In-Laws — Will My Partner Resent Me?
Thanks for reading Can We Talk?, a sex and relationships column that aims to tackle the burning questions about sex, dating, relationships, and breakups th
by Moraya Seeger DeG...
Unbothered
What Is A ‘Soft Black Girl Summer’? And Why I’m Vowin...
Follow the hashtag #SoftBlackGirl on Instagram and you will be inundated with tens of thousands of ethereal posts emulating something of a Bridgerton tea p
by Evie Muir
Advertisement
Advertisement
Discover
R29 Stories & News
Watch
R29 Original Series & Films
Shop
R29's Most Wanted