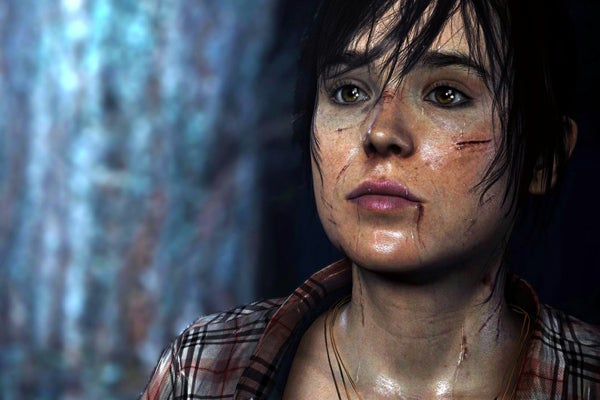 At this point in her career Ellen Page has become something of an expert on super powers. From her role in X-Men: The Last Stand as the walk-through-walls kid sister of the team Kitty Pryde to her world-building turn in Inception, Ellen has portrayed tough ladies wrestling with powers and responsibilities way above her maturity level. However impressive those special abilities may have been, it seems like her upcoming role in the Playstation 3 exclusive game Beyond: Two Souls might win in a dork-driven debate to the death.
Beyond premiered a new 35 minute gameplay trailer at the Tribeca Film Festival this past Saturday night, which is strange, mainly because line goers were wondering what the heck a video game trailer was doing at the TFF. Firstly, the game comes from the writer/director David Cage and his Paris-based studio Quantic Dream, and both have made a name by creating incredibly cinematic game experiences that preference storytelling over the standard game tropes of shooting, jumping, and generally running amok. Cage's previous game, Heavy Rain, has become one of the best examples of the games' and film industries' getting even cozier as bedfellows in the uncanny valley. So this new project is, in many ways, a 10 hour interactive filmic experience.
Advertisement
It seems as though Cage has truly found his muse in Ellen Page ("Cage and Page" has a good ring to it, right?). Over the course of the 35 minute trailer (which you can check out on the next page), Cage's virtual camera is trained on Ellen's emotional performance as the game's main heroine, Jodie Holmes. We see her fighting for survival against the winter cold, making new friends among the dregs of society, and dramatically questioning her own desire to go on living. This very human and emotional performance is at the core of the game experience, but then Cage throws in a whopping spin: Jodie's invisible partner, Aiden, who endows her with supernatural abilities. (We love those!)

Even though Page confessed she "...really hadn't played video games in like 10 years", she then professed her love of one game in particular: "I kind of stopped at Crash Bandicoot; I loved that game." (The Playstation-friendly audience cheered when she brought up the beloved marsupial).
She also explained how challenging the process of performance-capturing a lead role in a game vs. her experiences shooting film. "It was absolutely the most challenging acting job because every day we're doing thirty plus pages and it was non-stop. A lot of it was really, really intense and grueling so I think in those moments having to get there and get there quickly was really challenging but a great exercise for me."
Beyond looks to be an emotional and action packed game with amazing performances from Ellen Page, Willem Dafoe (!) and the rest of the supporting cast. It's an exciting time for gamers as new advances in technology are making the games more immersive and realistic than ever. Beyond is not only using this new technology, but is raising the bar of user interactive experience to a whole new level. So if you ever wanted to kick a bunch of butt, deliver a baby or busk for cash as a virtual Ellen Page, your epic will be arriving on October 3rd.
Video: Courtesy of Quantic Dream.
Unbothered
Brittney Griner Sentenced To 9 Years In Russian Prison For Drug C...
After being detained by Russian police at Sheremetyevo Airport on drug allegations in February, WNBA athlete Brittney Griner has officially been sentenced
by Ineye Komonibo
Unbothered
Say Goodbye To Macy Gray — She Outed Herself As A TERF
On July 4, a day when selective freedom was celebrated in America, it was only fitting that Macy Gray chose to go on known bigot Piers Morgan’s show Unce
by Wisdom Iheanyichukwu
Unbothered
White Supremacy Is To Blame For The Buffalo Massacre. That’s It.
A clip of CNN reporter Victor Blackwell breaking down in tears live on air while talking about last weekend’s horrific massacre of 10 Black people in a B
by Kathleen Newman-B...
Advertisement
Unbothered
Megan Thee Stallion’s Bombshell New Interview Reveals Devastating...
In July 2020, Megan thee Stallion was involved in an intense police stop after attending a celebrity pool party in Los Angeles, leading to the shocking rev
by Ineye Komonibo
Unbothered
Ari Lennox Shares An Update After Her Amsterdam Arrest
Updated December 2, 2019: Days after being detained at Schiphol Airport in the Netherlands, Ari Lennox has resurfaced on social media to give worried frien
by Ineye Komonibo
Unbothered
Two Men Convicted For The 1965 Assassination Of Malcolm X Have Be...
Nearly 60 years after the shocking assassination of civil rights leader Malcolm X, a new development in the investigation into his murder has led to t
by Ineye Komonibo
Unbothered
The Zombification of Whitney Houston
In Haitian mythology, the idea of what we now call zombies emerged from enslaved Africans’ deepest fear: not even death would bring freedom. Though suici
by Brooke Obie
Unbothered
Actually, Netflix, Content Like Dave Chappelle’s Transphobic Come...
Update: Netflix has fired the employee who was organizing an upcoming walkout (set to happen Wednesday, October 20) of trans staffers and allies in protest
by Kathleen Newman-B...
Unbothered
Years After Her Death, The Science Community Is Still Treating He...
In the 1950s, a Black woman named Henrietta Lacks walked into Johns Hopkins Hospital to be treated for cervical cancer, and her cells would go on to b
by Ineye Komonibo
Somos Libres
Why Black Puerto Rican Women Are Leading an Anti-Racist Media Ren...
While the 2020 Census was essential to many communities across the United States, it held a different meaning for Puerto Ricans. Battered after a decades-l
by Frances Solá-Sant...
Unbothered
R. Kelly Facing Life In Prison After Being Found Guilty Of Racket...
This story contains discussion of sexual violence. Please proceed with care. Updated September 27, 2021: Months after being charged and indicted for nine g
by Ineye Komonibo
Unbothered
Jennifer Hough’s First On-Air Interview About Nicki Minaj &...
*Editor’s note: this story contains discussions about sexual violence, threats, and intimidation. Please read with care.  A month after publicly all
by R29 Unbothered
Advertisement
Advertisement
Discover
R29 Stories & News
Watch
R29 Original Series & Films
Shop
R29's Most Wanted