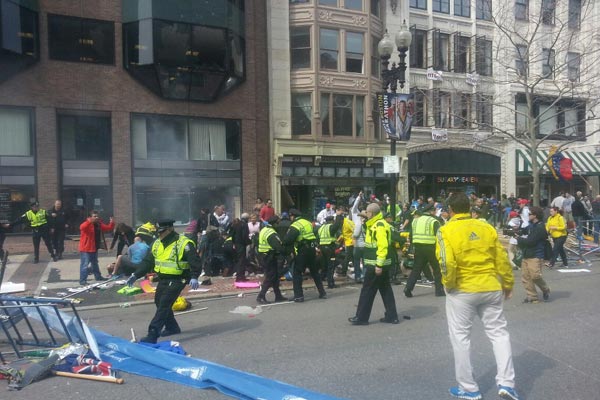 UPDATE 3: Officials have stated that homemade bombs caused the bombing. Two more have been found, and teams have been sent to dismantle them. No one has officially claimed responsibility. (Intelligencer)
UPDATE 2: According to the news stream from ABC and CBS, the explosions have been identified as bombs. Most of those injured appear to be spectators, and 23 people have been confirmed as being wounded. There have been two confirmed fatalities. For more news, NY Times is providing free, non-paywall coverage of the tragedy.
Advertisement
UPDATE: ABC reports that there were two explosions at the finish line, not just one. There are also reports of a controlled explosion. We will update as necessary.
No confirmation yet of what exactly is going on, but reports are coming in that two explosions were heard near the finish line of the Boston marathon, which took place today. The explosions were heard outside the Fairmont Copley Plaza Hotel, which has since been locked down. The Boston Globe is reporting at least a dozen injured, and runners' tents are being used as medic tents. We'll keep you informed. Our hearts go out to Boston.
If you know somebody running and are looking for more information, this site may help you track where they last checked in.