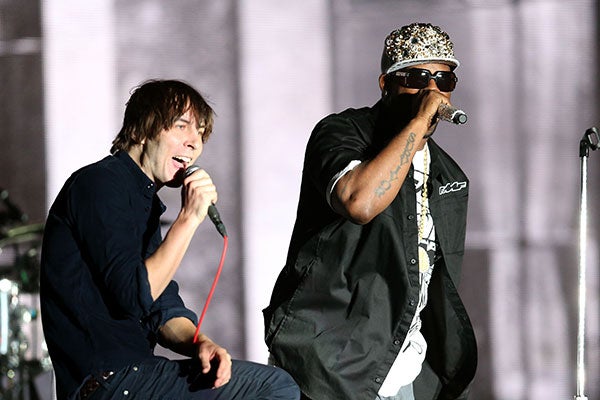 One way to get everyone talking (and Tweeting) at a Coachella performance is to mess with expectations. No one seemed to know this better than Day Two headliners Phoenix, who may have pulled the biggest prank in the festival's history. While rumors floated around the grounds that Daft Punk would be playing alongside the French synth-pop band, instead of the astronaut-helmed DJs, festival goers were treated to a guest performance by none other than R. Kelly. Needless to say, it was a switcheroo that was totally unexpected.
While Daft Punk rumors are common every year (and hey, we even fueled the fire a bit ourselves), 2013 seemed especially primed, what with the upcoming release of the duo's new album Random Access Memories. The band even dropped a trailer for its new song "Get Lucky" during SNL, just as Phoenix was hitting the stage –– the timing couldn't have been more perfect. And then out strode R. Kelly. The R&B star went straight into a remix of "Ignition (Remix)" that had Phoenix backing him, and frontman Thomas Mars singing the harmonies. As soon as fans realized what was happening, the crowd exploded, but as the performance closed, many were left scratching their heads. Chants of "Daft Punk! Daft Punk!" could be heard in the crowd. Us? We were perfectly happy with the R. Kelly experience, and content to know that Daft Punk will arrive someday in the future, emerging atop the flashing, electrified pyramid when they are needed the most.