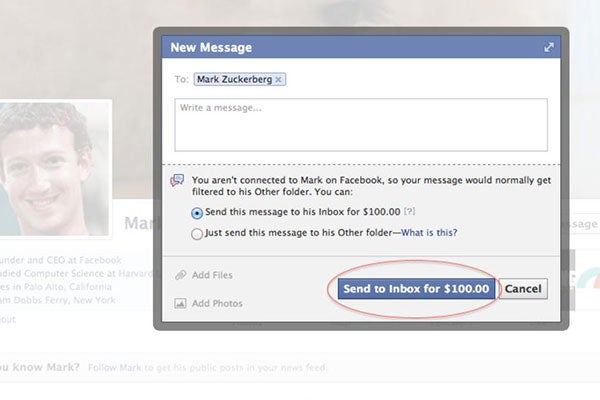 Do you have something you really, really need to tell Mark Zuckerberg? Judging by the amount of rage comments on the Internet these days, there's a good chance you do. So, why not get him where he's most comfortable and message him on Facebook? You can inbox people you have no direct connection with, but in this case, it's gonna cost you.
$100 to be exact — for the opportunity to appear in his real inbox (not the mysterious "other" file that pretty much nobody looks at, if they're aware of one at all). Facebook has already been experimenting with a $1 fee to message people outside your social web, and, in the past, there've been rumors adrift about the ability to message celebs for a cool Benjamin. But, as Mashable reports, this is the first time it's been confirmed.
If dropping that kind of dough makes you cringe, hit the comments and tell us: What would you tell Zuck if you had a minute of his time?