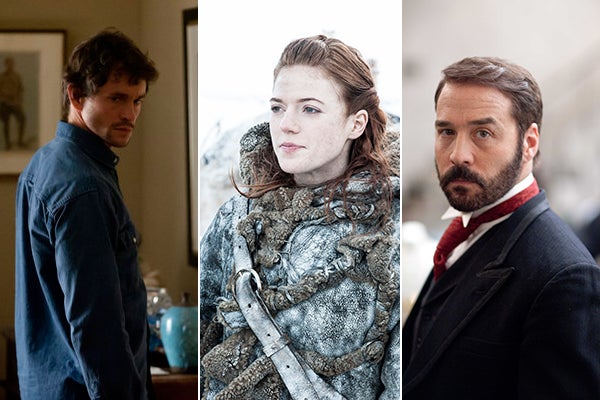 Hump: You know who has a face chiseled by the gods to be specifically optimized for the lighting on a gritty procedural crime show? Hugh Dancy — who has the perfect amount of scruff and sports those tortoiseshell-rimmed glasses on Hannibal.
Honorary “super-hot scruffy dude with wavy hair you just wanna run your hands through” mention of the week goes to Richard Madden, a.k.a. Robb Stark on Game of Thrones. If the scruff and hair didn’t convince you, presenting exhibits C-Z: interviews where he speaks in his native Scottish accent. I’d be totally fine with winter coming if I could spend it with him or Jon Snow.
Advertisement
Marry: Speaking of Jon Snow, I think I have a problem. If there’s even the slightest hint of a “will they/won’t they” couple on a show, I will start shipping them like a tween on Tumblr. First, it was Ben and Leslie on Parks and Rec. Then, it was Nick and Jess on New Girl. Now, it’s Ygritte (Rose Leslie) and Jon Snow (Kit Harington) on Game of Thrones. Screw your Night’s Watch celibacy vows, Snow. She’s one of the Free Folk. She can teach you things.
Also, TMZ says that Harington and Leslie are dating in real life, which had better be true. K, gotta get back to my F Yeah Jon and Ygritte Tumblr and fan-fic.
Kill: If you’ve seen even five minutes of Entourage, you will understand the cognitive dissonance that occurs when Jeremy Piven says, “Can’t a fellow get a break?” while clad in foppish gentleman turn-of-the-century garb. Maybe it’s because he’s playing Henry Gordon Selfridge, who is always described as a “brash American entrepreneur” who revolutionized department stores and introduced the idea that “the customer is always right.” So, he’s basically playing Ari Gold, but not as big of an a-hole. Except you can’t help but be on edge, just waiting for him to snap and yell out “LLOYDDDDDDDDDDDDDD.”

TV Shows
Let’s Unpack Cruel Summer‘s Upsetting Carnival...
Spoilers are ahead. Though Cruel Summer set up a brutal conflict between two teenage girls, Jeanette Turner (Chiara Aurelia) and Kate Wallis (Olivia Holt),
by Rosie Knight
The Bachelor
A Fan Favorite Bachelor Couple Is Headed Down The Aisle
After all of the relationship drama that has unfolded on recent seasons of The Bachelor (onscreen and in real life), it wouldn’t be a stretch to wonder j
by Ineye Komonibo
Entertainment
Demi Lovato’s New TV Show Is Truly So Unexpected
When you think of Demi Lovato, your mind probably immediately goes to music, but the pop star’s latest professional endeavor might have you connecting he
by Ineye Komonibo
Advertisement
Music
Billie Eilish “Never Want to Post Again” After Photos...
Billie Eilish debuted a new look on the June cover of British Vogue that imploded the internet — and made her never want to post on social media again. T
by Natalie Morin
Pop Culture
Remember Ben Affleck & Jennifer Lopez’s Famous 2003 Couples...
Early aughts fashion trends aren’t the only thing making a comeback in 2021. It appears that the era’s most famous it-couple is also back in st
by Natalie Morin
TV Shows
Netflix’s Halston Called Out By Designer’s Fam...
Biopics can often be a source of contention because not everyone will agree on the way certain iconic figures are portrayed; recently, biographical project
by Ineye Komonibo
Best of Netflix
Everyone Is At Home Watching These 10 Shows & Movies On Netflix R...
by Ineye Komonibo
Celebrity Couples
John Mulaney & Wife Anna Marie Tendler Announce Their Plans To Se...
After almost seven years of marriage, comedian John Mulaney and his wife Anna Marie Tendler have revealed that they have decided to officially part ways. S
by Ineye Komonibo
Movies
A Year Later, Dev Patel Will Finally Take The Crown In The Gre...
It’s been almost a year since we first learned of this exciting new project — what is time, even? — but A24’s unique take on the Arthurian
by Ineye Komonibo
TV Recaps
R29 Recaps: Every Episode Of Netflix’s Jupiter’s L...
What if your overbearing parents were superheroes? That’s the question the new Netflix series Jupiter’s Legacy decided to ask. It’s based on a gr
by Leah Marilla Thomas
TV Shows
Aidy Bryant Knew Exactly What She Was Doing With The End Of Sh...
Spoilers are ahead. In the final scene of Shrill, Portland writer Annie (Aidy Bryant) and her BFF Fran (Lolly Adefope) sit on a park bench, sipping directl
by Jean Bentley
Pop Culture
Laverne Cox Is Here To Save The E! Red Carpet
Laverne Cox is booked and busy, and her latest gig will take her behind the scenes of the biggest industry events as the new host of E!’s popular red
by Ineye Komonibo
Advertisement
Advertisement
Discover
R29 Stories & News
Watch
R29 Original Series & Films
Shop
R29's Most Wanted