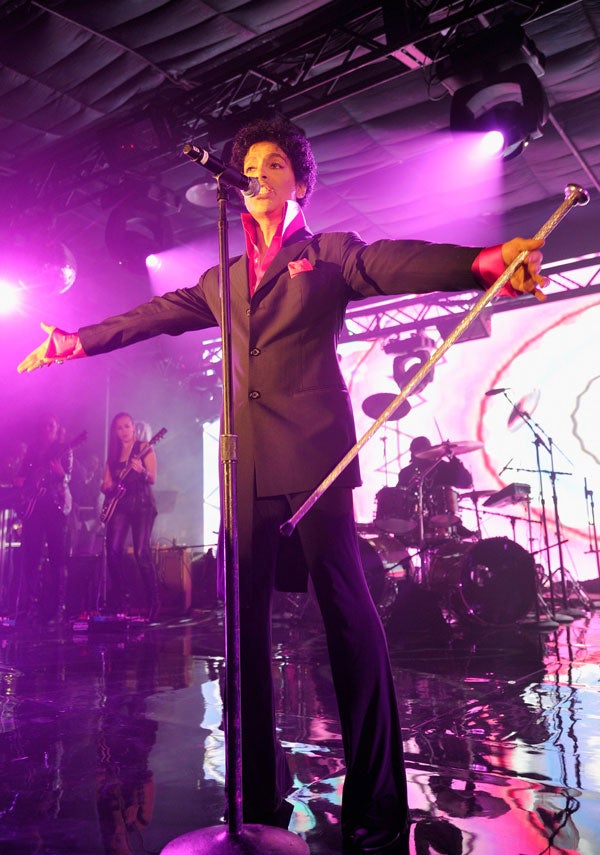 Here's how it goes at SXSW: You go and see a myriad of smaller, buzzier bands all week, wait in line for showcases (which often feature the same 20-25 of said bands), and come Saturday, some secret, mind-blowing show appears and everyone goes nuts. Two years ago, Kanye showed up with Jay-Z, last year it was Eminem, and two nights ago, it was The Purple One. Yes, Prince played a tiny (for him, at least) venue in support of Samsung, that lasted until 3 a.m. And not only did we get to see it, but we lived to tell about it, too.
Advertisement
With such large corporate participation in SXSW now, companies have engaged in a pretty massive practice of one-upery: Doritos built an enormous vending machine, MySpace flew out Justin Timberlake, but Samsung may have taken the cake by sending Prince fans on a city-wide scavenger hunt to win tickets to the Saturday night show. Anyone with a Galaxy had to search out "TecTiles" to unlock awards — and all 11 sent you to see Prince. (The irony, of course, is that photo-sensitive Prince strictly outlawed any unauthorized photos, including cellphones, which is a policy we can neither confirm or deny we adhered to, but would perhaps suggest you check out our Instagram.)
Which means, of course, the venue was filled with diehard fans (including, say, your author), and even at 54 years of age, The Artist absolutely killed it, with both classics and covers (he payed homage to both Michael and Janet Jackson). "They called our people and said they wanted some funk in Austin," Prince said, explaining the rarity of seeing a super-polished, 22-piece funk/soul band at SXSW, led by the cane-wielding singer. Despite not playing guitar (boo), he did include a ten-minute rendition of "Purple Rain," where he had the entire venue wailing the "Ooohs" at the end of the song. Of his repeating encores, Prince said, "Don't make me hurt you...you know how many hits I got!" We do indeed, Prince. We do indeed.

GG Good Game
Twitch Is For Makeup Too – Just Ask Body Painter Melissa Croft
“Put some care into making sure you’re truly yourself.” That’s the takeaway for Twitch streamer Melissa Croft, which is interesting considering the
by Eleni Thomas
Movies
Leave Marilyn Monroe Alone
Content warning: This piece contains references to physical and sexual violence. When you think of tragic heroines of Hollywood’s golden age, your mind p
by Katherine Singh
Somos Latinx
Hocus Pocus 2’s Belissa Escobedo Also Practices Bruj...
Belissa Escobedo is a Los Angeles-raised Chicana, the biggest cat mom ever (self-proclaimed), a former theater kid, possibly America Ferrera’s long-lost
by Priscilla Rodriguez
Advertisement
Unbothered
The Meaning Behind Stormzy’s “Mel Made Me Do It”...
Stormzy dropped his new single Mel Made Me Do It casually the night of Thursday, September 22 and, within minutes, Twitter (his least favorite place) was i
by Nikki Onafuye
Unbothered
Don’t Worry Darling Is Peak White Feminism (As Expected)
Spoilers ahead. Don’t Worry Darling is the latest in a long continuation of movies that discuss female catharsis and misogyny but fails to acknowledge ra
by Haaniyah Angus
Somos Latinx
In Vampire Academy, Daniela Nieves Delivers a New Kind of ...
Ever since she was very young, Daniela Nieves has had a penchant for chit-chat.  “Once you know me, just as a person, I love to talk,” Nieves, the
by Mekita Rivas
Movies
Tyler Perry Makes A Pivot With A Jazzman’s Blues — But Doe...
This story contains spoilers for Netflix film A Jazzman’s Blues. Just months after resurrecting Madea for a film that no one asked for (Madea as Beyoncé
by Ineye Komonibo
Unbothered
The Problem With How We’re Talking About The Nia Long & Ime Udoka...
For as long as I can remember, Nia Long has been the woman of everyone’s dreams. She’s played some of the most adored characters in Black cinema, and h
by Tayo Bero
Movies
Don’t Worry Darling Can’t Overcome The Rumors
Spoilers ahead. In the world of Don’t Worry Darling’s Victory, a sun-cloaked desert planned community, 1950s-era gender roles are alive and things aren
by Katherine Singh
Unbothered
Sanaa Lathan Is A Director Now & On The Come Up Is Her T...
Welcome to “What’s Good,” a column where we break down what’s soothing, distracting, or just plain good in the streaming world with a “rooting fo
by Kathleen Newman-B...
Disney
How To Score A Disney+ Subscription (Even If It’s Just For ...
I say “Disney” you say “land,” or “world,” or perhaps now during the height of at-home streaming, you chime “plus
by Alexandra Polk
Unbothered
John Boyega Says He Only Dates Black Women — What’s The Issue?
British-Nigerian actor John Boyega is the latest subject of online discourse this week, and surprisingly, it’s not because of his stellar (and thirst-ind
by Ineye Komonibo
Advertisement
Advertisement
Discover
R29 Stories & News
Watch
R29 Original Series & Films
Shop
R29's Most Wanted