Skip navigation!
Story from Fashion
UPDATE: Kerry Taylor Auctions' Fit for a Princess sale made over £800,000 yesterday with the sale of 10 dresses owned by Diana Princess of Wales. As auctioneer Kerry Taylor described, "Bidders were able to buy a unique slice of British history. We attracted bidders from across the world including Asia, America, Austria, Australia and of course, the U.K., including three important museums, so we are hopeful that now people will actually get to see some of the dresses that belonged to the People's Princess! The top lot, the famous dress she wore when she danced with John Travolta at the White House, made the top price of £240,000. It sold to a British gentleman as a surprise to cheer up his wife. Lucky woman!" Lucky woman indeed. It's probably the best cheer-up gift we've ever heard of! (The Times)
Advertisement

Originally published February 22, 2013:
What price would you put on owning a piece of fashion history? Well. Ten of the most iconic dresses that the late Diane Princess of Wales ever wore are going under the hammer at the Kerry Taylor auction house on March 19.

The gowns by Catherine Walker, Zandra Rhodes, Belleville Sassoon and Bruce Oldfield, to name a few, originate from the early phase of the late princess’ style evolution. In fact, the velvet Victor Edelstein dress she wore to dance with John Travolta, at a 1985 White House State dinner, is part of the sale.
A Mrs Maureen Rorech Dunkel, who toured the world with them to raise money for charity, bought the dresses the first time around. Something we are sure the princess would have approved of. Now, it is someone else’s turn. They’ll have to have deep pockets though, as estimates are between £20,000 and £200,000. Still, the catalogue itself is a mere fiver. Much more our price range! (Vogue.co.uk) 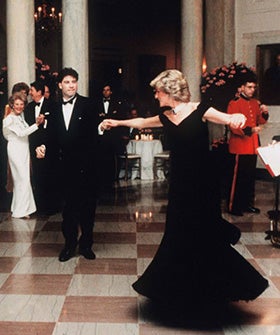 Photo: Via BBC
Dresses
Say Hello To The LBD’s Edgy Twin: The Leather Dress
by Vivien Lee
Shopping
Madewell’s New Spring Denim Is A Love Letter To The ’90s
While we obsess over Madewell for its plethora of affordable styles — these days, it’s a crucial destination for seasonal dresses, outerwear, shoes
by Jinnie Lee
Fashion
How To Channel 2023’s Rom-Comcore Fashion Trend
Modern dating can feel like one endless tragicomedy: the swiping, the awkward first dates, and all the ghosting included. It’s no surprise that our gener
by Frances Solá-Sant...
Advertisement
Lingerie
The 33 Best Pairs Of Cotton Underwear For Down There
by R29 Team
Deals
Maxi Dresses, Funky Scarves Galore, & 23 New Anthropologie Sale S...
by Chichi Offor
Best Bomber Jackets
Shearling Jackets Are 2023’s Biggest Outerwear Trend
This year, outerwear trends have been defined by statement-making jackets. And while biker chic styles ruled the fall, winter will be the season of the avi
by Frances Solá-Sant...
Most Wanted
Savage X Fenty Pieces to Wear for Rihanna’s Concert (AKA the Supe...
Super Bowl LVII is quickly approaching on February 12. While we don’t yet know which teams will be playing, we do know that we’ll be cheering on halfti
by Victoria Montalti
Weddings
Behold The 18 Most Comfortable Wedding Shoes Every Bride Will Adore
by Amanda Randone
Shopping
This Opulent (& Affordable) Jewelry Brand Is Inspired By A Bygone...
Deniz Gurdalis, the designer behind the UK-based sustainable jewelry brand Ottoman Hands, is likely a bit of a history buff — after all, the “Ottom
by Jinnie Lee
Most Wanted
13 Super-Chic Shoes That Are So Very Comfortable
If you suffer from any number of foot alignment issues — be it as simple as having flat feet or dealing with plantar fasciitis — you understand the fru
by Samantha Baker
Most Wanted
Béis Just Launched The Sporty Collection Of Our Dreams
You already know Béis for the brand’s chic, durable luggage in 50 shades of beige; now, it’s bags can take you from the airport to the gym, spin s
by Karina Hoshikawa
Fashion
6 Fashion Trends That Will Take Over 2023 — Shop Them Now
Four months after the new runway collections made a case for all we should expect in the new year, the 2023 fashion trends have started making their way in
by Irina Grechko
Advertisement
Advertisement
Discover
R29 Stories & News
Watch
R29 Original Series & Films
Shop
R29's Most Wanted