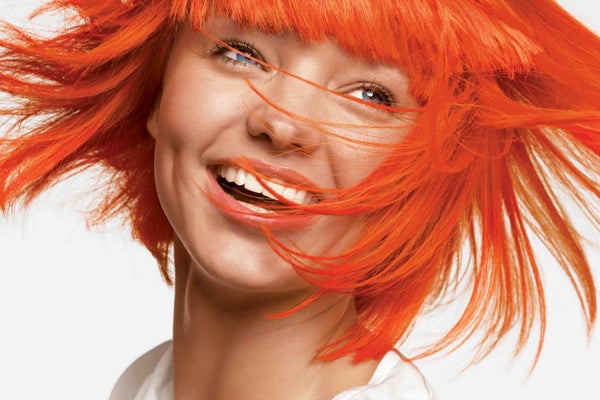 We never should have doubted you, Tyra. Turns out that the "smize" — a smile with your eyes — is actually a sign of genuine happiness, not just a modeling technique. New research reveals that smiling is not only a reflection of our emotions (obviously), but a catalyst for them — and it's all in the eyes. Remember that time your joke had the whole brunch table laughing? Next time, check out your friends' peepers. If the crow's feet are showing, their grin is an honest one. If not, chances are they're faking their enthusiasm. Bummer. Thanks to science, we can't hide behind a fake smile anymore.
Advertisement
Way back in the 1800s, a Frenchman named Guillaume-Benjamin-Amand Duchenne de Boulogne conducted various experiments on facial expressions. Using electrical currents, he contracted his subject's facial muscles to express various emotions such as sadness, anger, and joy. It gets complicated after that, but after experiments involving both electricity and genuine jokes, the smize was born: The "Duchenne smile," as it's called today, revealed that the muscles around the eyes wrinkle when the subject is feeling genuine joy. The "true smile," he said, is "only brought into play by a true feeling." The mouth smiles and the eyes follow suit — that is, if the emotion is genuine enough.
Crinkling up those little muscles around the eyes actually leads to an elevated mood and even a longer life. This is a result of the connection between the act of smiling and the body's production of stress hormones. When the muscles around the mouth activate and the eyes begin to crinkle, fewer stress-induced hormones are produced, which in turn improves one's mood. A recent study inspired by Duchenne's work looked at photographs of smiling people and found that those with the biggest grins on their faces lived, on average, seven years longer than those smiling the least. Another study revealed that women who were smiling the most in photos from their school years had more-contented marriages, happier lives, and fewer crises down the road than their deadpan peers.
Some doctors have hypothesized that the inability to smile increases the likelihood of depression. This is not to say that a frowny face leads to a serious mental illness, but studies have shown the less we smile, the less positive we become. The more we interact, the more we smile, the happier we are. We go to the gym to exercise our muscles, so why not smile more to exercise our positive emotions? We can't fake a smile — an honest one, at least. So why bother? The truth is in the smize. Think about that the next time you reach for your anti-wrinkle serum. (The Atlantic)

Sex
The Shower Is The Perfect Quarantine Masturbation Spot
For those of us not fortunate enough to live alone, coronavirus quarantine may have made of our living situation a bit crowded. So much so that it may be t
by Elizabeth Gulino
Fertility Spectrum
Congresswoman Abby Finkenauer: Why I Fought To Double Endometrios...
Congresswoman Abby Finkenauer couldn’t help but smile as she stood on the floor of the House of Representatives on Thursday, July 30. The Iowa Democrat w
by Molly Longman
Workout Clothes
The Best Underwear You Need For Your Sweatiest Workouts
by Cory Stieg
Horoscope
Mercury Is Entering Leo, & It’s Time To Speak Your Mind
Mercury is entering the fiery sign of Leo, and as a result, we can expect our words to get a lot more passionate. “After spending almost two months i
by Elizabeth Gulino
Wellness
The Best High Impact Sports Bras
by Molly Longman
Deals
We’ve Got A Secret Sex Toy Coupon Just For R29 Readers
Heads up, R29ers: We’ve already brought you the best sex toy deals to shop from quarantine, and now, we’re serving up something extra-special.
by Karina Hoshikawa
Horoscope
The Stars Want You To Open Up This August
by Venus Australis
Horoscopes
Your Horoscope This Week
by Venus Australis
Spirit
Netflix’s Indian Matchmaking Shows Just How Importan...
By now, you’ve probably heard about Netflix’s new reality show, Indian Matchmaking. The series follows Sima Taparia, Mumbai’s top matchma
by Elizabeth Gulino
Horoscope
August’s Full Moon In Aquarius Is All About Justice
Another month, another full moon — but August 3’s Full Sturgeon Moon is about to bring us some intense energy. In the sign of altruistic Aquarius,
by Elizabeth Gulino
Sex
The Icy Tricks That Can Transform Summer Sex
Steamy sex is usually a good thing. But during the summer months, when it’s already blazing outside, creating extra heat by getting busy can sound like a
by Molly Longman
Coronavirus
How Glory Holes Became The Symbol Of COVID-19 Sex
It started when the new New York City Department of Health sex guidelines for COVID-19 were sent into our office Slack group. The document, titled “S
by Elizabeth Gulino
Discover
R29 Stories & News
Watch
R29 Original Series & Films
Shop
R29's Most Wanted