Skip navigation!
Story from Designers
After the 2011 scandal concerning designer John Galliano and some very inappropriate comments, most of us thought he'd never make it back into the limelight. Dior sacked him almost immediately, he was stripped of his of Légion d'Honneur, and he over the course of a few months, he seemed to fall off the radar a bit. But now, the controversial figure may have a ticket back into the industry's good graces — by way of fashion vet Oscar de la Renta, who has invited the disgraced designer to spend time in his NYC studio over the next few weeks.
“John and I have known each other for many years and I am a great admirer of his talent,” de la Renta told WWD. “He has worked long and hard on his recovery and I am happy to give him the opportunity to reimmerse himself in the world of fashion and reacclimate in an environment where he has been so creative.”
Advertisement
If de la Renta truly intends to orchestrate a return for Galliano, it will be one of fashion's most notable comebacks. Though he's apologized for his actions, most have been more than reluctant to associate with the once-lauded designer. But WWD reports that the Anti-Defamation League (once a strong critic of Galliano's antisemitic comments) welcomes de la Renta's decision. The ADL's national director noted that “We believe that individuals can change their hearts and minds as long as they demonstrate true contrition.... We wish him much success and look forward to working with him again in the near future as a spokesman against anti-Semitism, intolerance, and bigotry."
Here's hoping Galliano is truly repentant. While his comments will be a stain on his reputation and a sting in the hearts of those who once revered him, in the spirit of forgiveness we sincerely hope he can recover some lost ground, while simultaneously showing his remorse for some very unfortunate moments in the past. (WWD) 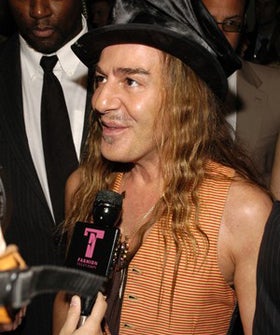 Style
Pyer Moss Designer Kerby Jean-Raymond To Make Haute Couture Debut
On Wednesday, Pyer Moss designer Kerby Jean-Raymond revealed plans to show during fall ‘21 Paris Haute Couture Week which will take place from July 5 to
by Eliza Huber
Style
Chanel’s Punk-Inspired Show Featured Garter Bags, Harnesses & Fis...
Never underestimate the power of accessories. On Tuesday, Chanel presented its cruise ‘22 collection which, in addition to midriff-baring tweed sets and
by Eliza Huber
Style
Young Designers Get Ripped Off All The Time. Is There Any Way To ...
Borrowing from others has always been a part of fashion design. But ethically, legally, and creatively — it's small brands who suffer the most in this pr
by Eliza Huber
Advertisement
Style
The Target X Christopher John Rogers, ALEXIS & RIXO Lookbook Is H...
by Eliza Huber
Style
The Ganni x Ahluwalia Collab Is ‘90s-Inspired — & Made With Upcyc...
Update: The Ganni x Ahluwalia collection is now available for purchase on Ganni.com. This story was originally published on April 16, 2021. On Friday, Lond
by Eliza Huber
Style
Prabal Gurung’s New Bridal Line Includes A Corset Gown & A ...
by Eliza Huber
Style
Michael Kors’ 40th Anniversary Fashion Show Featured Naomi Campbe...
If you have missed Broadway, you’re not alone. On Tuesday, New York fashion mainstay Michael Kors celebrated his namesake brand’s 40th anniversary
by Eliza Huber
Style
Gucci & Balenciaga Teamed Up On The Runway — But Don’t Call...
The rumors are true: Gucci and Balenciaga teamed up (sort of), and the results were on full display in Gucci Aria, a film by Floria Sigismondi and Gucci
by Shannon Carlin
Style
Rejina Pyo’s Collab With & Other Stories Features This Seas...
Update: Rejina Pyo x & Other Stories is now available to shop on stories.com. This story was originally published on April 14, 2021. Get ready to so
by Shannon Carlin
Style
Celine Agrees With TikTok: Skinny Jeans Are Out
When TikTok speaks, Celine listens. Well, at least, when Gen Z is speaking about skinny jeans being out. On Wednesday, Celine (virtually) presented its Win
by Shannon Carlin
Style
Get Ready To “Crave” The New White Castle x Telfar Un...
White Castle isn’t just serving up hamburgers, it’s serving up fashion looks, too. And it’s all thanks to White Castle’s new collab
by Shannon Carlin
Fashion
22 Fashion-Forward Places To Buy A Wedding Dress Online
by Irina Grechko
Advertisement
Advertisement
Discover
R29 Stories & News
Watch
R29 Original Series & Films
Shop
R29's Most Wanted