Story from Designers
The world has just become a chicer place, because multitalented director-designer-provocateur Tom Ford is now a papa. The designer and his partner of 25 years, Richard Buckley, have announced the joyous arrival of their son, Alexander. Buckley, the former editor-in-chief of Vogue Hommes International met Ford while he was still working at Gucci and before he launched his eponymous line. The enduring couple later moved to Italy in 1989 after Buckley's recovery from cancer.
In an interview with Out in 2011, Ford said of Buckley, "You can look at someone and feel like you've known him forever. The first night I ever had drinks with Richard I felt I knew everything about him." In that same extremely romantic interview, Buckley said, "I couldn't imagine being without Tom now. I couldn't imagine what I'd be like if something happened to him. There's only one Tom for me. He is still that man who I met 24 years ago, who has a good heart."
Advertisement
It definitely seems like the perfect time for this couple to pass on all this love to that fortunate child. Now, this is a celeb tot whose style we'll certainly be watching... (Daily Mail) 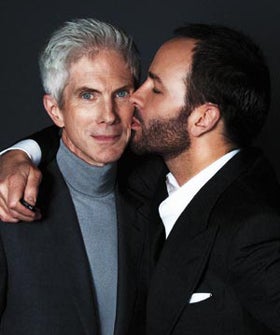 Style
Rihanna Takes A Virtual Vacation In The New Savage x Fenty Campaign
If it weren’t for the pandemic, you’d likely be packing up a weekender bag right now in preparation for the upcoming holiday. Long weekend or not, vaca
by Eliza Huber
Style
Gap Is Not Moving Forward With The Telfar Collaboration
Update: Gap is not going ahead with the Telfar collaboration “at this time.” Following the announcement of the forthcoming Kanye West x Gap line, socia
by Sara Radin
Style
This Cult-Favorite Destination For Dresses Launched A Bridal Line
by Irina Grechko
Style
8 Queer Brands That Make Suits For Women
by Irina Grechko
Style
11 Honoré Launched Its Own Plus-Size Line
by Irina Grechko
Style
Burberry Announced An “Immersive Show Experience” For All In Sept...
Burberry is going ahead with a runway show this September — though it won’t be like those of years past. The presentation of the Spring/Summer 2021 col
by Irina Grechko
Style
LaQuan Smith’s Collab With Revolve Is Perfect For Your Next House...
by Eliza Huber
Designers
Beloved New York Label Sies Marjan Shuts Down Amidst COVID-19
On Monday evening, New York brand Sies Marjan announced that it will be closing its doors after five years in business as a result of the Covid-19 pandemic
by Irina Grechko
Style
Jane Fonda, King Princess, & Lil Nas X Go Off The Grid For Gucci’...
Gucci is known for its productions. The Italian luxury brand’s use of 3-D printed severed heads and Game of Thrones-esque dragons are proof enough of tha
by Eliza Huber
Style
50 Jewelry Brands Teamed Up To Support Young Black Designers
Jewelry showroom For Future Reference announced on Thursday the creation of an endowment with New York City-based jewelry designer Brent Neale Winston. Nam
by Eliza Huber
Style
Givenchy Taps Matthew Williams To Replace Clare Waight Keller As ...
French fashion label Givenchy announced on Monday morning that Matthew Williams, the founder of luxury streetwear label 1017 ALYX 9SM, will be the house’
by Eliza Huber
Style
49 Black-Owned Fashion Businesses To Support
by Eliza Huber
Discover
R29 Stories & News
Watch
R29 Original Series & Films
Shop
R29's Most Wanted