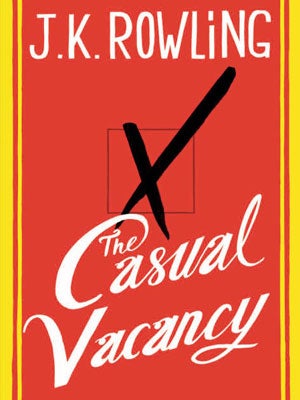 Well, the bad news is, there is definitely no Quidditch, no wizards, and no Slytherin/Gryffindor rivalry. But Little, Brown and Company is hoping you will say Alohomora to J.K. Rowling's latest release, a mystery novel titled
The Casual Vacancy. The publishing company has just released an image of the cover...and it sure wasn't done by Mary GrandPré. Without making assumptions, Rowling's new book (set to be released this September), is likely the type of murder mystery its bold, simplistic, '70s-style design implies.

While readers everywhere are surely excited to see what post-Potter Rowling has in store, this red-and-yellow affair seems rather uninteresting. But then again, how can you top The Boy Who Lived?