Skip navigation!
Story from Fashion
Photo Courtesy of Getty Images.
Manhattan label Rowing Blazers has championed tongue-in-cheek preppy style since it was founded in 2017 by US national team rower Jack Carlson and his partner, champion oarswoman Keziah Beall. Giving oversized rugby shirts, cricket jumpers and Oxford button-downs a lively spin with rainbow brights and playful logos, the menswear brand subverts bourgeois Ivy League and Oxbridge style to create contemporary pieces – think blazers with piped edges and baseball caps with kitsch slogans – whose fans include Timothée Chalamet, Thundercat and Benny Drama.
Advertisement
Photo Courtesy of Rowing Blazers.
While we've been wearing the menswear pieces slouchy and oversized for some time now, Rowing Blazers launched its inaugural womenswear collection earlier this month, hooking up with the makers of two of Princess Diana's favourite knits just in time for season four of The Crown. A match made in heaven, Diana's Sloane Ranger style made her a preppy pin-up from the moment she married Prince Charles; today, the late princess's '80s and '90s wardrobe continues to inspire everyone from Virgil Abloh to Gigi Hadid.
Carlson teamed up with designers Joanna Osborne and Sally Muir of London label Warm & Wonderful to recreate their black sheep jumper, which Princess Di often wore to polo matches, styled with a Peter Pan collar shirt and jeans. He tells Refinery29: "It was magical. Working with the original designers is what makes this so special. Joanna and Sally are great fun and their stories from the early days of Warm & Wonderful are brilliant. I can just picture them in the early '80s, at a market stall in Covent Garden, selling their jumpers to pop stars and Sloane Rangers."
Photo Courtesy of Rowing Blazers.
Photo Courtesy of Rowing Blazers.
Carlson also joined forces with Gyles & George, the brand that popularised playful novelty jumpers in the 1980s, to recreate its "I'm a Luxury Few Can Afford" knit. Princess Diana most famously wore this piece with a stiff-collared white shirt when photographed at home with William and Harry, sporting the most '80s bouffant imaginable. "Designer Gyles Brandreth is a legend!" Carlson tells Refinery29. "A true polymath and a novelty jumper icon." Both knits, priced from £250, are available in Selfridges from today.
Advertisement
Whether you're a monarchist or not, our collective fascination with Princess Diana – from her marriage and personal style to her philanthropy and tragic death – refuses to wane. "I'm American but my family and I lived in London when I was a kid in the early '90s," Carlson says. "I think everyone looked at Diana's style. My mum certainly did! She had one of the original Warm & Wonderful sheep jumpers." Why does Carlson think Diana's sartorial legacy continues today? "She was ahead of her time. She perfected the art of mixing high and low, and blurred the lines between menswear and womenswear. In a weird way, she was doing streetwear before streetwear was a thing – but at the same time, she was the archetype of the Sloane Ranger! She was all of these contradictions and that's what made her so iconic – and what makes her so relevant to what's happening in fashion now."
Beyond her kitsch knitwear, Carlson says: "Princess Diana wore a double-breasted blazer better than anyone – better even, perhaps, than her ex!" There's still inspiration to be found in Prince Charles, though: Rowing Blazers has recreated the numbered cotton polo T-shirts favoured by the prince. Still, there's no overshadowing Lady Di's eternal style. Nab a knit, quick, before The Crown airs next month and inspires everyone else to pay homage, too.
Rowing Blazers' "I'm a Luxury" and Sheep Knits, £250, are available at Rowing Blazers and Selfridges now. 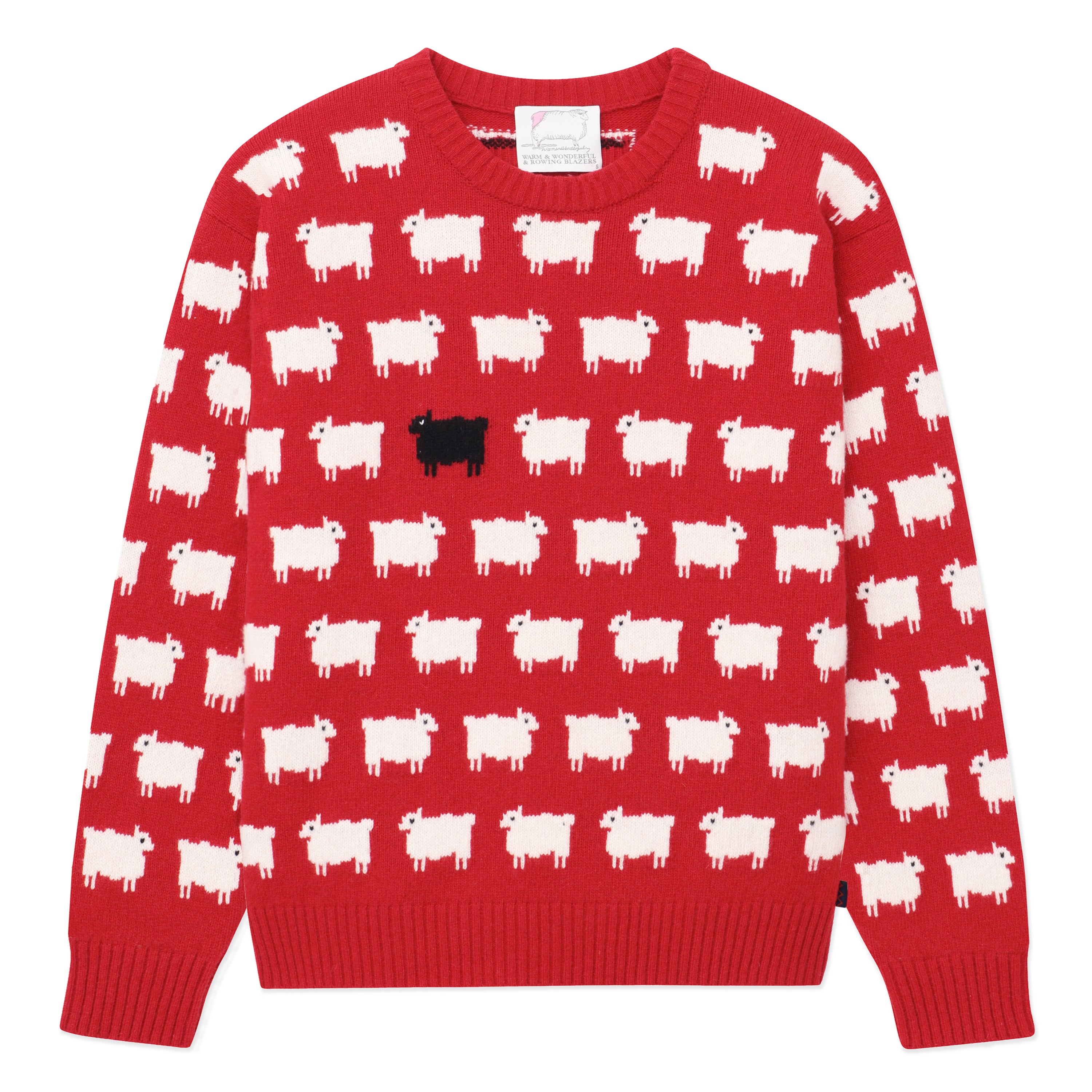 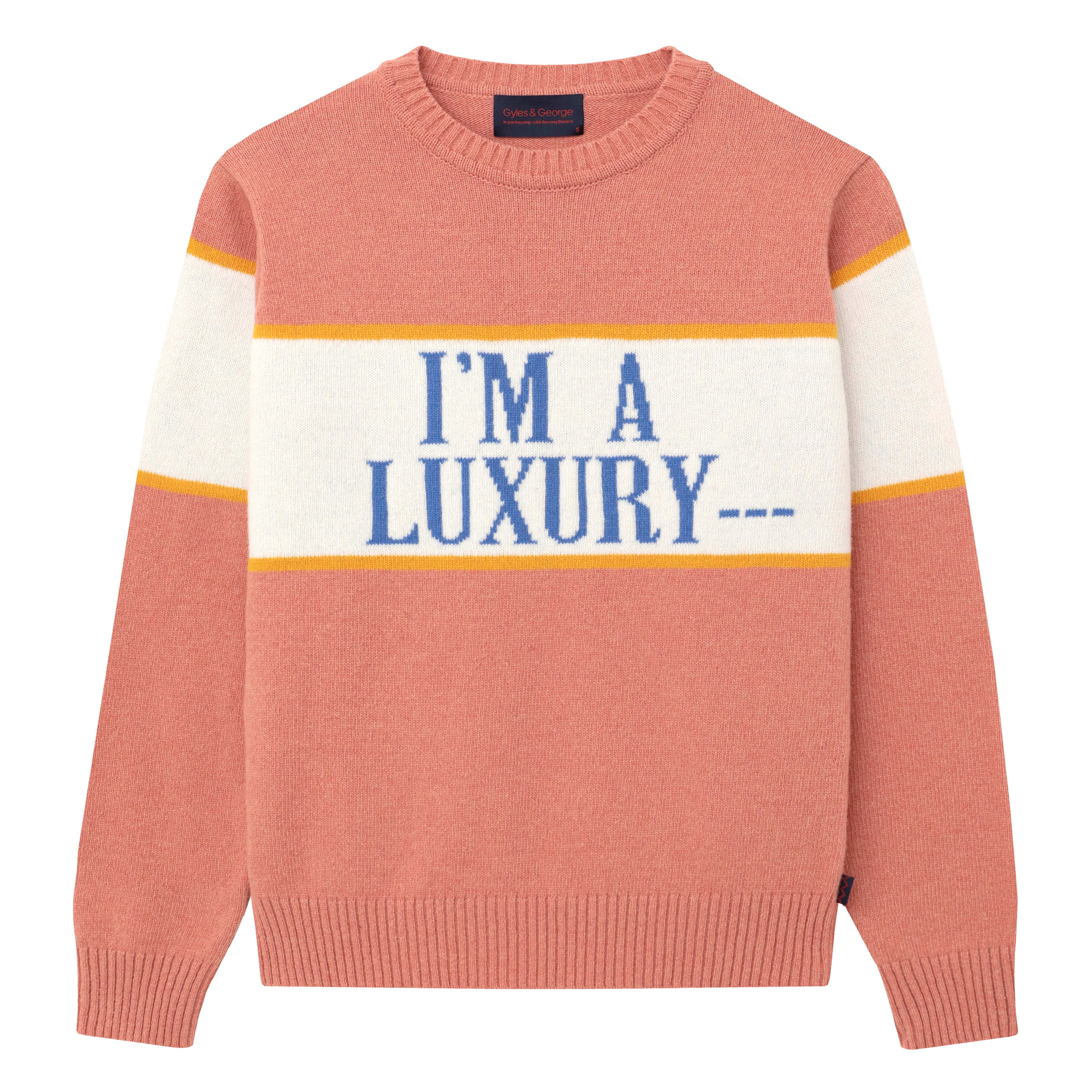 Gyles & George X Rowing Blazers
Women's "i'm A Luxury" Sweater
£250.00
Rowing Blazers
Refinery29's selection is purely editorial and independently chosen – we only feature items we love! As part of our business model we do work with affiliates; if you directly purchase something from a link on this article, we may earn a small amount of commission. Transparency is important to us at Refinery29, if you have any questions please reach out to us.
Shopping
15 Missoma Bestsellers That Prove Gold Jewellery Never Goes Out O...
by Esther Newman
Fashion
How To Source The Best Pre-Loved Looks, According To Expert Resel...
If you’re watching the current season of Love Island, you might have noticed a slight difference in the islanders’ wardrobes. This year the reality sho
by Eve Upton-Clark
Shopping
1 Brand, 5 Summer Party Trends That Won’t Go Out Of Style
As our social calendars fill up with dinner plans, rooftop drinks, birthdays, house parties and weddings, this summer is starting to look very different fr
by Esther Newman
Advertisement
Fashion
How I Built A Summer Capsule Wardrobe After Living Out Of A Suitc...
After a far too quiet past couple of years, we certainly have had our wish of a revived social life, granted thanks to the return of weddings, family reuni
by Kendall Becker
Fashion
Naked Knits, Prints & Baguettes: Resort Trends To Steal This Season
Keeping up with designer runways sometimes seems like something only fashion journalists and rich people do. For resort collections that can feel like even
by Ebony-Renee Baker
Fashion
Mismatched Shoes Are A Secret Styling Tool, Here’s How To Do It
There’s an episode in season 4 of Gossip Girl, in which the show’s resident “evil dictator of taste,” Blair Waldorf, is unraveling as she tries to
by Frances Solá-Sant...
Fashion
What If We Treated Shopping Like Dating?
Have you ever gotten it into your head that you absolutely need a new piece of clothing? A trending item like a butterfly top or puffy tote bag, or a produ
by Ebony-Renee Baker
Fashion
A Minimalist Summer Wardrobe That’s Anything But Boring
For some of us, getting dressed in the summer can be a stressful experience. Between baring more skin than you’d normally care to and preparing for cold
by Ebony-Renee Baker
Fashion
Swap Your Gold Jewellery For Summer’s Trending Colours
Maximalism is dominating the jewellery world – as it is with the rest of fashion and interiors – and it’s a trend that we’ve got our eyes excitedly
by Ebony-Renee Baker
Fashion
Y2K Butterfly Tops Scared Me — Until I Tried Them
Welcome to Refinery29’s So, How Is It Really? where we take a look at all of the topics that have the internet talking. In studying them up close, we ans
by Frances Solá-Sant...
Fashion
Kim Kardashian’s Met Gala Dress Alarmed Experts. Turns Out, They ...
When Kim Kardashian walked up the Metropolitan Museum’s stairs at this year’s Met Gala wearing Marilyn Monroe’s famed Jean Louis dress from 1962, it
by Frances Solá-Sant...
Fashion
London Designer Patrick McDowell Is Reclaiming ‘Live, Laugh...
In 2021 a particular aesthetic hailing from the mid to late 2000s was deemed to be extremely uncool. You could even say it was cheugy, a word that swiftly
by Ebony-Renee Baker
Advertisement
Advertisement