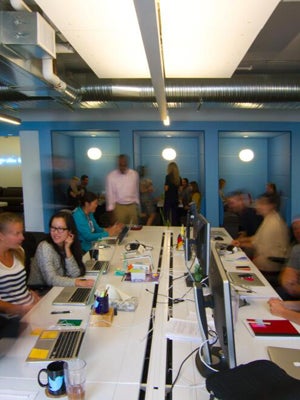 As if the Bay Area needs another gaggle of millionaires, it looks like employees of Twitter might just be seeing green (by which we mean cash, in case that wasn't clear) in the not-so-distant future. Less than an hour ago, Twitter announced that it has taken the first steps in filing for an initial public offering (a.k.a. IPO). Of course, this news came courtesy of a tweet: "We’ve confidentially submitted an S-1 to the SEC for a planned IPO. This Tweet does not constitute an offer of any securities for sale," the powers that be tweeted, before posting a Twitpic of its team in its S.F.-based office.

According to Francis Gaskins of IPO Desktop.com, who was interviewed by
USA Today, the timing of the filing means that Twitter stock could hit the public market by early December. The move follows that of fellow social-networking giant Facebook, which went public in May of last year, with trading beginning at $38 per share, only to have that price plummet considerably, and then rebound just yesterday to an all-time high of over $45 per share. Here's hoping Twitter has even steadier success.