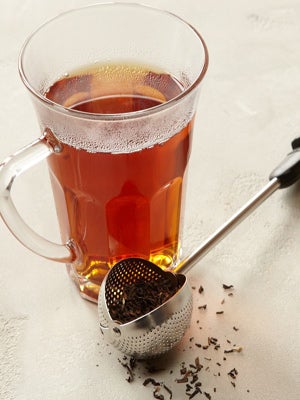 Iced or hot, with milk or honey — the power of tea knows no bounds...in theory. For centuries, civilizations across the world have consumed tea for its healing properties. More recently, case studies have shown tea's positive effects on cardiovascular diseases and tumors. So, why haven't more institutions and the FDA given it the official healthy thumbs-up?
It comes down to the numbers, says Dr. Rui Hai Liu, a professor in the Department of Food Science at Cornell University. "There's just not enough data to recommend any direct health benefits for humans," he explains. For instance, tea does contain chemical compounds called polyphenols — antioxidants that have been found to block enzymes that cause cancer. However, these results have been apparent only in animals, Liu adds, not yet in humans.
Advertisement
Even if the benefits of the brew aren't 100% conclusive, hardcore tea-lievers are quick to list the drink's health benefits. That's why we asked San Francisco's resident tea guru, Uncle Gee, owner of Vital Tea Leaf, to also give the lowdown on the five common types of tea.

Green
Minimally oxidized and rich in a cancer-fighting compound called catechins, green tea may protect against heart-related illnesses, gastric, pancreatic, bladder, and ovarian cancers — and even cavities, according to the Mayo Clinic. On top of that, a study from the Linus Pauling Institute at Oregon State University suggests green tea can even help strengthen the immune system. Gee also fully believes in its immune-boosting effects. In fact, the 82-year-old tea importer and educator drinks four glasses a day. (Notably, Dr. Liu drinks 10-15 cups a day.)

Black
Perk up, coffee lovers, because your daily dose of caffeine is here. Fully oxidized or crushed, black tea contains the highest levels of caffeine (14-61 mg per 8 oz) of all teas. Earl Greys and English Breakfasts are full of health-helping flavonoids, which serve as powerful anti-aging and disease-preventing antioxidants. In a recent study, researchers at the University of Western Australia found drinking black tea may even help lower blood pressure.

Oolong
Oolong, a hybrid tea, is semi-fermented and processed to get the best qualities of both unoxidized green tea and oxidized black tea. "Oolong has the perfect balance of antioxidants and caffeine, which is great for coffee drinkers with high blood pressure," says Gee.

White
Because white tea leaves and buds are unfermented, they contain the highest amounts of antioxidants. That means a cup a day may help with skin rejuvenation and may even assist individuals with breast, colon, and prostate cancer, says Gee.

Herbal
Non-caffeine drinkers, take note: Herbal teas can be infused with anything from plants to fruits to spices. However, the health benefits may be less apparent. For example, in a March 2011 study, scientists found no evidence that chamomile has the soothing effect it's often claimed to have, according to
Science Daily. On the other hand, in clinical trials, scientists found hibiscus tea lowered blood pressure in a group of pre-hypertensive and mildly hypertensive adults. Basically, the health benefits will depend on the type of infusion — not all are created the same.

How To Drink It
Although tea bags are convenient, the filter lessens the potency of the active compounds, says Gee. Many prepackaged and commercial brands overprocess and overgrind their leaves. Instead, use a French press or tea ball or strainer to efficiently infuse your water. Another great tip? After boiling water, wait five to 10 minutes to let it cool before adding your loose leaves or buds. This will prevent the leaves from burning and prevent those antioxidant agents from being neutralized in the process.

So, while tea might not be a cure-all, this is one daily habit we're willing to embrace.

Horoscope
Your Horoscope This Week: May 22nd to May 28th, 2022
by Gala Mukomolova
Horoscope
Feeling Spontaneous? That’s Just Mars In Aries
Honey, Mars is home. The Planet of Action, Drive, and Desire is finally entering into its all-time favorite sign after a two-year hiatus — in other words
by Elizabeth Gulino
Abortion Access For All
‘I Needed Those Years To Grow.’ 5 People On How Abort...
Democrat-blue balloons and bawling women — that’s what El Sanchez thought of immediately when they first learned of the Supreme Court draft opinion th
by Molly Longman
Advertisement
Abortion Access For All
Will Our Phone Data Be Used Against Us In A Post-Roe World?
As if people with uteruses didn’t have enough to worry about since the leaked Supreme Court draft opinion that signaled the end of Roe v. Wade, more info
by Molly Longman
Somos Latinx
I’m Still Unlearning My Internalized Ableism as a Fat & Dis...
Relaciones is a monthly series that helps Latinxs navigate interpersonal and intrapersonal relationships by unpacking the tough but necessary conversations
by Yesika Salgado
Horoscope
This Gemini Season Is A Breath Of Fresh Air
There’s a vibe shift coming — astrologically speaking, that is. On May 20, the Sun will leave its spot in stubborn Taurus and enter into the sociab
by Elizabeth Gulino
Most Wanted
The Best Suction Vibrators, According To A Sex Therapist
Suction sex toys defy everything you’ve come to expect from a vibrator. For starters, powerful thrusts and pulses are replaced with targeted waves of
by Karina Hoshikawa
Horoscope
An Alluring New Astrology App With Celestially Precise Insight
Calling all star signs, from the astro-curious to the straight-up celestially obsessed. A new phone app has crash-landed into this universe, and Hint is he
by Chichi Offor
Horoscope
The Lunar Eclipse In Scorpio Will Help You Harness Your Inner Cou...
Total Lunar Eclipse. Just saying the words out loud feels like an invocation. The way that “total” is a kind of promise, an envelope the moon slips int
by Gala Mukomolova
Horoscope
Your Horoscope This Week: May 15th to May 21st, 2022
by Gala Mukomolova
Dedicated Feature
Yes, My Emotional Support Object Is My Water Bottle
Yes, the rumors are true. I — a 28 year-old woman with a full-time job, a solo car insurance policy, and not one but two gym memberships — still sleep
by Emma Turetsky
Can We Talk?
I Set Boundaries With My Racist In-Laws — Will My Partner Resent Me?
Thanks for reading Can We Talk?, a sex and relationships column that aims to tackle the burning questions about sex, dating, relationships, and breakups th
by Moraya Seeger DeG...
Advertisement
Advertisement
Discover
R29 Stories & News
Watch
R29 Original Series & Films
Shop
R29's Most Wanted