Skip navigation!
Story from Makeup
Ever wonder how female musicians manage to look totally kick-ass even after months on the road and very little time to get ready? Yeah, us too. So, we caught up with some of our favorite indie darlings at SXSW to get their secrets for looking pulled-together even when they feel like a hot mess. Grab a pencil, you’re gonna want to take some notes. 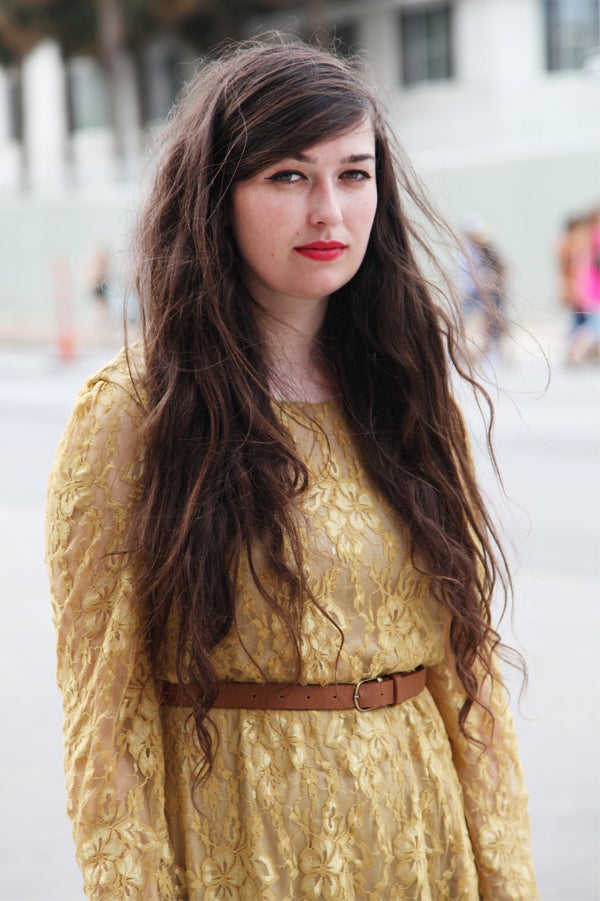 Madeline Follin, Cults
We first laid eyes on Madeline Follin on the cover of Cults' self-titled album last year, and instantly became a fan of her dream-pop vocals and overall style. When we met up with Follin during SXSW, she looked wide-eyed and bushy-tailed despite the band’s rigorous show schedule. And after a year of nonstop touring, thanks in part to the band’s overnight success, she has quickly learned to adapt to life on the road.

What's your must-have beauty product when you're on the road?
"Sally Hansen Nail Polish Strips in Glitz Blitz — that way I can do my nails on the road and I don’t have to worry about spilling polish in the van."

How do you keep your hair looking great in less-than-favorable conditions?
"Pssst Dry Shampoo. Even the guys in the band steal it. If I can’t shower after a show, I use the dry shampoo to keep my hair from looking oily."

Do you have any quick-fix beauty tricks you rely on to get gorgeous in a flash?
"I spritz rosewater on my face when I'm feeling tired or gross, and it instantly makes me look and feel better." 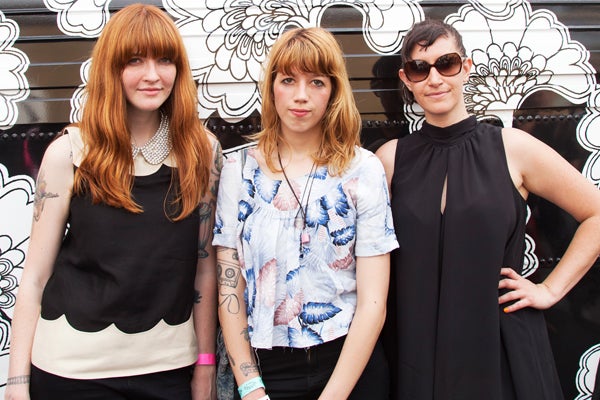 The Vivian Girls
Pop-punk trio The Vivian Girls played nice with preppy brand Kate Spade for a four-city tour with a final destination of Austin. At SXSW, the stylish band charmed the crowd with their jangly power chords and three-part harmonies about unrequited love. After their set, we pulled Cassie Ramone (guitar), Katy Goodman (bass), and Fiona Campbell (drums) aside to find out exactly how they manage to look so rockin'.

What's your must-have beauty product when you're on the road?
"Dermalogica Gentle Cream Exfoliant keeps my skin from breaking out on the road," says Goodman, who is definitely the beauty junkie of the group.

How do you keep your hair looking great in less-than-favorable conditions?
"Learn to cut your own bangs. With dry hair, I take my bangs in tiny sections and snip the ends a little at a time. I never just cut straight across — then it just looks too perfect and weird," says Ramone, who cops to being the least-girly (but most DIY savvy) of them all.

Do you have any quick-fix beauty tricks you rely on to get gorgeous in a flash?
"Showering does wonders if you are feeling tired, but if you can’t shower right away, I at least try to wash my face — Yes to Cucumber Facial Towelettes are great on the go," says Campbell, who also swears by a good face mist like L’Occitane Fresh Face Water. 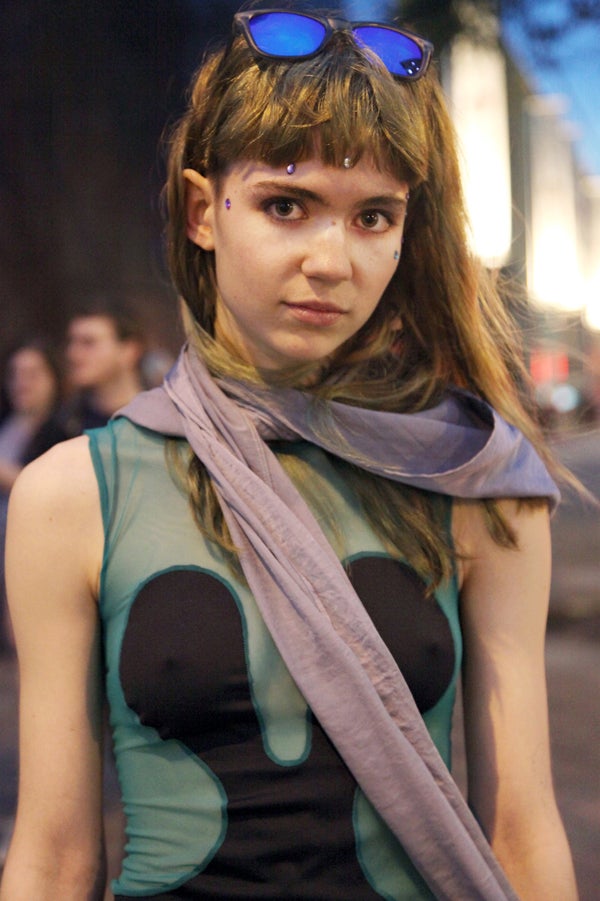 Grimes
Electronic It Girl Claire Boucher, aka Grimes, is known for her quirky sensibility and dance beats in her one-woman show Grimes, but offstage, she's soft spoken and aloof. The Canadian artist was one of the hottest tickets at SXSW — and she didn’t disappoint. Before her Spotify show, we met up with the rising star to see if her beauty regime was as complex as her stage setup.

What's your must-have beauty product when you're on the road?
"Water. I stopped using anything else on my face and it made my skin better, so now I just use water."

How do you keep your hair looking great in less-than-favorable conditions?
“I bleach the hell out of my hair before a tour so it won’t get greasy," says the naturally brunette singer/songwriter. (Editors's note: Yeah, we're going to go ahead and say we don't recommend trying this one).

Do you have any quick-fix beauty tricks you rely on to get gorgeous in a flash?
"Brushing my teeth — if I am feeling gross, I like to brush my teeth, and if I can’t do that, then I always have gum and mints on me."

Photographed by Christy Kurtz
Most Wanted
This K-Pop Beauty Collab Just Launched At Ulta Beauty — & It̵...
Dear ARMY, you probably already know this buuuut BTS-adjacent brand BT21 just launched a makeup and skin-care collab at Ulta Beauty — and it’s not
by Mercedes Viera
Most Wanted
I Wore A Full Face Of Merit Beauty — & These Are The 6 Products W...
If your algorithm is anything like mine, you can’t fire up Instagram without being served an ad for an impeccably designed clean beauty brand —&nbs
by Karina Hoshikawa
Beauty
Trying Blair Imani’s ‘Affirming’ Lipstick
Is there anything quite as nice as a good affirmation? It’s an unsurprising fact that I am the kind of gal who has affirmations written on Post-Its on my
by Amanda Mitchell
Advertisement
Beauty
Ilia Just Brought Back This Fan-Favorite Product — & I Tried It Out
You’re reading an On-Site Shopping story — meaning you can browse, add to cart, and actually purchase the product recommendations featured below withou
by Karina Hoshikawa
The Sell Out
This Sold-Out Red Lipstick Is Back, Alongside A New Hot Pink Hue
You never want something until you can’t have it. In The Sell-Out, we’re getting the scoop from your favorite retailers on what’s selling
by Jinnie Lee
Most Wanted
I Tried A Full Face Of Jones Road Beauty — & These Are My Favorites
There are so many beauty brands nowadays that it’s sometimes hard to keep track. It’s a sentiment echoed by makeup artist, entrepreneur, and ge
by Karina Hoshikawa
Dedicated Feature
Your Makeup Kit Should Include These Products, According To This ...
It wasn’t even that long ago when makeup brands only had one or two foundation shades for darker skin tones. While more brands are expanding their sh
by Hilary Shepherd
Dedicated Feature
I Was Excluded From Beauty Because Of My Skin Tone. Here’s How I’...
“You’re really pretty for a dark-skinned girl.” “Who turned off the lights? Where is Illekkiya?” “You’d be so much prettier if you were light
by Ilekkiya Suppiah
Beauty
From Skin Tints To Glowscreen, 15 Non-Foundation Foundations
by Megan Decker
Deals
Missed the Sephora Sale? SpaceNK Is Offering 20% Off All Its Make...
The Sephora VIB Sale might be dead and gone, but you still have a chance to add some iconic makeup products to your arsenal look thanks to SpaceNK. Startin
by Mercedes Viera
On-Site Shopping
Tower 28’s Tinted SPF Is My Warm-Weather Makeup MVP
You’re reading an On-Site Shopping story — meaning you can browse, add to cart, and actually purchase the product recommendations featured be
by Karina Hoshikawa
Dedicated Feature
How To Create Spring 2022’s Biggest Makeup Looks For Under $50
Ever gone to the store with the intention of quickly grabbing one or two things — laundry detergent or toothpaste, for example — only to find yourself
by Hilary Shepherd
Advertisement
Advertisement
Discover
R29 Stories & News
Watch
R29 Original Series & Films
Shop
R29's Most Wanted