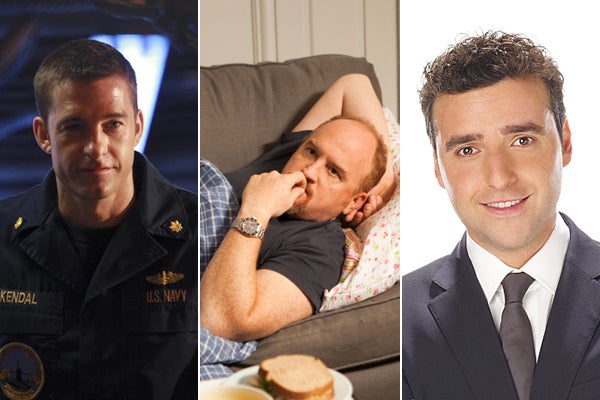 Hump: As if there was even a shadow of doubt as to which team to be on when it came to the whole Ben-Felicity-Noel love triangle (some of us still haven’t let go of Felicity), allow me to present Scott Speedman: 2012 edition. Now starring on the new high-concept, lost-on-an-island series, Last Resort, it’s like, “Scott Foley who?”
Marry: Ever seen a grown man cry over a doll? When it’s Louis C.K. laboring over the piece of crap one he bought his daughter for Christmas in the midst of a clear existential “I’m going to be alone forever” downward spiral, it may be the funniest doll-repair moment in modern television. (And the competition is actually pretty fierce: Remember the Curb Your Enthusiasm doll haircut episode?)
Advertisement
The season finale of Louie was a series of ruminations on loneliness. There was the tale of Ping the duck, Fanny Chapcranter (best fictional news anchor name, ever) with her warning that there will be no one to “hold your body,” death as the clock strikes 12 on New Year’s Eve, and the saddest imagined conversation between his grown-up daughters a father could ever have.

Daughter 1: “All he does is sit in that big, old chair and eat Pinwheel cookies.”
Daughter 2: “Why didn’t he try harder to be less alone?”
Daughter 1: “He’s so alone.”

I have an inkling that Louis C.K. is trying to tell us about his biggest fear, you know? But listen up, ladies: This is a man who will portray his most vulnerable self on national television. Most people don’t even let their guard down like that in the shower**. I have a feeling someone will come along to care for ol' Louis in his golden years.
**Insider tip: Crying in the shower saves loads of time.
Kill: You know those actors who are always on the verge but never quite reach maximum exposure and potential? David Krumholtz is totally one of those people. Sure, you could argue that he had a successful stint on the CBS procedural Numb3rs (what’s that? You didn’t watch? No worries, neither did I. My mom was a huge fan, though.), and that he scored a pretty plum gig playing Will McAvoy’s therapist on The Newsroom.
So, what’s the problem? Despite the aforementioned success in dramas, Krumholtz is now the star of a sitcom. But like, look at him. Recognize that face? Yeah, he’s Jake Johnson from New Girl’s doppelganger. While Krumholtz may have appeared on the scene first, Johnson beat him to the sitcom lead spot — and on a much better show. And just like Hollywood doesn’t actually have room for Josh Duhamel and Timothy Olyphant, we don’t really need both these guys on sitcoms.
Advertisement
On Partners, Krumholtz plays the heterosexual half of a pair of lifetime bros based on the creators of Will & Grace. But timing, as they say, is everything. W&G broke television ground on the gay/straight BFF situation. Now, it’s nothing new. If the entire premise of the show is that a gay man and a straight man are inseparable, codependent friends, they’d better be fully developed, meaty characters the audience can immediately latch on to.
This is not the case with Partners. Michael Urie is the overly flamboyant gay man who’s forever meddling in straight dude Krumholtz’s life. It’s like Will & Grace — if Will & Grace focused on Jack and a random dude off the street. You know what’s not a meaty sitcom role? “Random Dude Off The Street.” That’s pretty much how Krumholtz’s character is written in the pilot. Also, he and Sophia Bush (who plays his fiancée) have about as much chemistry as two dinner plates.
Now, if you’ll excuse me, I’ll be watching Jake Johnson use their face better on New Girl.

Music
Splish Splash, Here Are All The Songs You Need To Soundtrack Your...
by Courtney E. Smith
TV Shows
The Bachelor‘s Colton Underwood & Cassie Randolph Ha...
Colton Underwood and Cassie Randolph have broken up after almost two years. Underwood, 28, and Randolph, 25, met in 2018 on an unconventional season of The
by Kathryn Lindsay
Best of Netflix
Is That Control Z Character Really Dead After The Finale?
Warning: Spoilers ahead for Control Z season 1 finale, “Public Enemy.”  Most shows would save a confrontation between its Big Bad and its hero for
by Ariana Romero
TV & Netflix
The Space Force Soundtrack Is A Musical Chill Pill
by Martha Sorren
Music
The History Of The "Song Of The Summer" Is A Wild Ride
by Courtney E. Smith
Pop Culture
After Weeks Of Quarantining Apart, Julianne Hough & Brooks Laich ...
Julianne Hough and Brooks Laich are participating in the ultimate form of social distancing: getting divorced. After quarantining apart for the past few we
by Kathryn Lindsay
Entertainment
Space Force’s Mark Naird Is Part Michael Scott, Part...
Michael Scott is back on TV… sort of. Steve Carell’s Space Force character General Mark Naird is based on — at least in title, job function, and
by Martha Sorren
Movies
Dive Into The Best Summer Movies On Netflix
by Elena Nicolaou
Pop Culture
It Looks Like Nina Dobrev Is Dating This Very Famous Former Olympian
There’s no better time to get to know someone than in quarantine, but we know romance isn’t truly real until it’s documented on Instagram
by Kathryn Lindsay
Best of Netflix
Finished Selling Sunset? Stream These Movies As A Palate...
by Anne Cohen
TV Shows
A New 5-Minute Disney+ Show Promises To Calm You Down — And It Ac...
Honestly, everyone could really use a break right now even if just for five minutes. That’s where the new Disney+ show Zenimation comes in. A play on
by Martha Sorren
TV & Netflix
You Can See The Space Force Cast’s Star Power From O...
by Martha Sorren
Discover
R29 Stories & News
Watch
R29 Original Series & Films
Shop
R29's Most Wanted