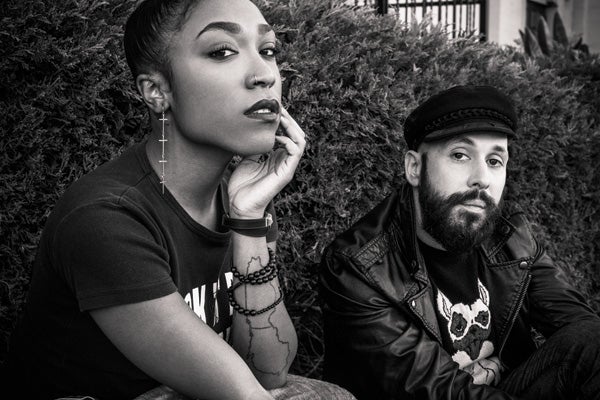 PYYRAMIDS is the new project from Tim Nordwind of indie rock Internet sensations OK Go, along with Drea Smith from electro-pop act He Say/She Say. "Do You Think You're Enough" — whose visual accompaniment we're happy to premiere — features aggressive vocals from Smith, driven by raw post-punk guitar. If you're expecting some sort of riff on OK Go's famously inventive Rube Goldberg videos, you're here for the wrong band. Instead, "Do You Think You're Enough" captures PYYRAMIDS' angular (no pun intended) rhythms with frenetic, intoxicating imagery of the band performing a bleary live set. No gimmicks: just rock 'n roll.

According to Nordwind:
"PYYRAMIDS originally started as a studio project, but this year we're stepping out of the studio and into a live space. We worked with our dear friend and director Michelle Peerali to document the process of performing these songs in real time. As a result, Michelle not only helped capture the excitement of what it's like to perform, but was able to help preserve, visually, the psychedelia and mystery behind the music."

Advertisement
PYYRAMIDS will be playing a bunch of shows at SXSW next week, and you can keep track of the band using the hashtag #pyyramidsliveatsxsw (dates below). The band's debut LP, Brightest Darkest Day, is available April 9. Check out the clip here:
PYYRAMIDS –– Innovative Leasure "Do You Think You're Enough"

Best of Netflix
How Each Episode Of The New Baby-Sitters Club Updates The ...
by Shannon Carlin
TV Shows
Where Does Hanna Go After Season 2’s Deadly Finale?
Warning: Spoilers ahead for Hanna’s season 2 finale, “The List.”  “So, what now?” Those are the final words of Hanna season 2. They are said
by Ariana Romero
Best of Netflix
What Every Warrior Nun Bible Verse Episode Title Act...
by Rachel Paige
Music
24 Songs To Add To Your Fourth Of July Playlist This Year
by Shannon Carlin
TV Shows
Warrior Nun’s Alba Baptisa Breaks Down The Finale
Warning: Spoilers ahead for Warrior Nun’s season 1 finale, “Revelation 2:10.”  “I was a firm believer that No — Father Vincent was always go
by Ariana Romero
Best of Netflix
You Have 10 New Netflix Treats To Binge For July 4th Weekend — He...
by Ariana Romero
Movies
There’s A Mini-New Girl Reunion In Netflix’s...
by Lindsay Denninger
Movies
The Disney+ Recording Is Wonderful, But Will Hamilton Ever...
The outbreak of COVID-19 has kept a lot of people inside throughout these past several months, but now thanks to the upcoming release of Hamilton on Disney
by Kelly Schremph
TV Shows
Your Favorite Quarantine Binge Is Coming Back For An Even Wilder ...
After a whirlwind first season, Hulu original series The Great has been green lit for another installment — huzzah! Deadline reports that the irreverent
by Ineye Komonibo
Books & Art
Take These Audiobooks With You On Your Next Road Trip
by Lydia Wang
Amazon
Hanna Adds Some New Characters To The Mix In Season 2
A reset is afoot when the Amazon Prime’s Hanna returns for season 2. Having wrapped up the story that closely followed the movie that it’s based on
by Rachel Paige
Best of Netflix
Meet The New Baby-Sitters Club
by Ariana Brockington
Discover
R29 Stories & News
Watch
R29 Original Series & Films
Shop
R29's Most Wanted