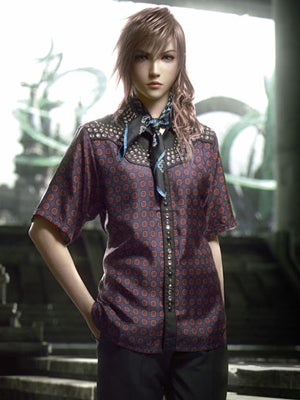 It would normally cost the characters of Final Fantasy XIII-2 a ton of Gil to afford Prada clothes, and seeing as they spend most of their time fighting monsters and buying enough phoenix downs to get through their next fight with Caius, we're willing to bet they'd find such luxuries a frivolity. But it looks like now that they're done saving the world (it only took two games), they're willing to let themselves go a little bit.
Okay, obviously we kid — there's no Prada store in Cocoon! But in all seriousness, consider us in Stagger State, because we never really expected Prada to be featured together with cast of Square Enix's Final Fantasy XIII-2 in Arena Homme+ Magazine. Don't get us wrong, we've long admired the sartorial skills of our favorite Final Fantasy characters. But we're used to our favorite digital darlings being clad in outfits that consist of tight and tiny bottoms, boob-baring shirts (because it helps to show a little skin when fighting evil), and usually no less than six belts or straps per character...which, now that we think about it, is really no different than any Givenchy show we've ever seen. But to see them decked out in Prada's spring '12 collections is a little jarring (but very, very, very awesome). Also, seeing as how celebrities are so heavily Photoshopped these days that they might as well be video game characters, we guess we shouldn't be so shocked that Prada's latest models exist completely in virtual reality. Although, we're a little unsure of why leading lady Lightning was put in a men's shirt that looks several sizes too big for her, we have to say that she does carry it very well and, ahem we wouldn't mind trying on that gorgeous studded button-up ourselves.
(HypeBeast)

Unbothered
As We Mourn The Death Of Lauren Smith-Fields, Where Is The Justic...
Black TikTok influencer Lauren Smith-Fields was found dead in her apartment on December 12. As the 23-year-old’s family continues to dig for answers over
by Stephanie Long
Unbothered
The War On “Wokeness” Is A War Against Martin Luther King Jr.’s L...
Today may just be my least-favorite day on the internet, and yet, it’s one of my favorite days of the year. Every year on this day, I re-read Dr. Martin
by Kathleen Newman-B...
Somos Latinx
What Latinxs Are Manifesting for 2022
With the end of yet another strange year comes the opportunity for new intentions, reinventing ourselves, and reimagining our realities. 2020 shook us to t
by Jacqueline Delgad...
Advertisement
Somos Latinx
Why Puerto Rican Christmas Carols Are a Symbol of Patriotism
For all the political limbo Puerto Ricans have endured in the last 500 years, one thing is clear: come Christmas, we’ll cook lechón asado, improvise pat
by Frances Solá-Sant...
Somos Latinx
The Mirabal Sisters Fought Bravely Against State Violence—These D...
The names Patria, Minerva, and María Teresa Mirabal are synonymous with resistance. Across the Dominican Republic and Latin America, people young and old
by Jasely Molina
Somos Libres
How Republicans & Democrats Weaponize Latinx Trauma to Get Votes
Daniela Ferrera had stopped at a red light on October 11, 2020, in the Miami neighborhood of Westchester, where a pro-Joe Biden caravan was making its way
by Raquel Reichard
Somos Libres
Haiti Aided Latin American Independence Movements; Latinxs Are Re...
In 1815, Spain’s defeat of Simón Bolívar’s revolutionary army in Venezuela nearly extinguished the dream of independence in South America. After the
by France Francois
Somos Libres
My Father Was Forced to Flee His Country; That’s Exactly Why I Pr...
Like many first-generation Latinx people living in the United States, I grew up hearing stories of liberation movements, government brutality, extreme poli
by Lola Méndez
Somos Libres
Loverbar Was A Safe Space For Queer Puerto Ricans; That’s Exactly...
"It would be irresponsible of me to call it a safe space. But I will try my fucking damnest every single day to make it as safe as possible.”
by Mercedes Viera
Somos Libres
The Word “Latinx” IS A Betrayal To Latinidad. That’s Exactly The ...
Latinx is a betrayal. It’s an attack. It’s a butchering of Spanish. And that's why I use it.
by J. A. O.
Work & Money
The Pandemic Exposed The Lie Of Women’s Equality. Where Do ...
As many women face increasing pressures from work and home, activists and experts urge federal action
by Jana Cholakovska
Coronavirus
The FDA Has Officially Approved Pfizer’s COVID Vaccine. Wil...
Update: On Monday, August 23, the FDA approved the Pfizer/BioNTech COVID-19 vaccine, making it the first officially licensed vaccine against the coronaviru
by Danielle Campoamor
Advertisement
Advertisement
Discover
R29 Stories & News
Watch
R29 Original Series & Films
Shop
R29's Most Wanted