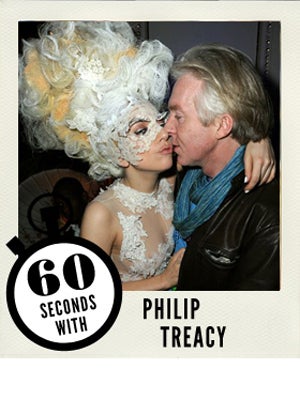 When one thinks of a master milliner, Philip Treacy is normally the very first name to come to mind. Lucky for San Franciscans, the legendary hat maker came to town to attend a series of events surrounding the Academy of Art University's BFA fashion show, including a millinery demo with craft store supplies for the AAU's in-awe students. To learn all about his S.F. adventure, plus his disdain for the word "fascinator," and the possible hat boom on the horizon, we posted up on a curb in Fisherman's Wharf and talked shop with the icon.
Advertisement

Have you shopped while in San Francisco?
"I went to some of the vintage stores. Suzy [Menkes] took us with her on a shopping trip. We went to Reliquary and we went to the African shop across the street, which was my favorite. I bought lots there and so did Sarah [Burton]. And nothing was for sale in the store! This one piece that Sarah wanted was not for sale. I had to explain to the woman in the shop. I said, 'You know that girl who's standing over there who wants to buy that piece? Did you see the royal wedding?' And she goes, 'Uh, yeah.' And I said, 'She made the wedding dress.' And then she said, 'Okay, it's for sale.'"

When you were speaking to the students earlier in the week, you mentioned hating the word fascinator. Why?
"It's the most ridiculous word. Personally, I think it sounds like some dodgy sex toy. And it's really a head dress. Or a hat. A baseball cap is a hat. A headwrap is a hat. Anything you put on your head is a hat. But I hate fascinators, even though people think my hats are fascinators."

You also mentioned that JFK going hatless might have influenced the lack of hat-wearing in the U.S.
"I'm a huge fan of the Kennedy administration and how glamourous it was. He choose not to wear a hat and he was the most important person in the world at that moment. He was the taste maker and the taste meister. And he had the most incredible hair and didn't need a hat. Of course, that didn't help the men's hat market, but that was his choice, which I empathize with and understand. I think hair became more important than hats in the '60s and that likely began to kill the hat industry. His wife wore a pillbox, but it was an excuse for a hat, really. It was all about everything but the hat. Halston, who was one of my favorite designers, designed that hat. And I love Halston more than the pillbox. But that's what she wanted."

Advertisement
So, by the time you started studying hat making, they might have already been démodé. "When I started designing hats, the other students would say in a very apologetic way, 'Why are you designing hats? Only old ladies are wearing hats.' But I love hats — that's why I design them. Hats are about another dimension of passion about dressing up. You have to wear shoes, you have to wear clothes, but you could spend your whole life without wearing a hat. I quite like the fantasy aspect of hats because it's about self embellishment. We all have a head and everyone has the potential to wear a hat. And they've really changed from being conformist accessories to an accessory of rebellion. So, I make hats for the rebels of the world. And I like that, a lot."

Do you think hats will always be bigger in the U.K. than they are over here?
"It's bigger in the U.K., but it's traveling! Glamour transcends culture. I mean, are you trying to say that American women aren't interested in glamour? Of course they are! They're some of the most glamorous women in the world. I think in the future, maybe when I'm dead, they're going to get into hats. Fashion today is not about the designer, it's about the individual. It's become muchos democratic. Magazines pretend to dictate style. But they can't. That's over. Today the power is with the consumer. And hats really fit into that individual approach. They are really the epitome of individuality. I can see people scared to wear a hat because of what other people might think, but I can also see the writing on the wall and pretty soon, there'll be someone walking down this very street in San Francisco saying, 'I feel like wearing a fucking hat, because I feel like it.'"

Do "hat people" have anything in common?
"I know all of the hat wearers of the world and they are not who people think they are. People think that people wearing hats are looking for attention. But, in fact, they are often quite shy people who gain their power through wearing hats. Instead of popping a valium, a hat can make you feel better because it sort of takes you away from yourself. It makes you feel good. Once women universally understand that hats are empowering, they'll be back in a big way."

How important is it for you to talk to the design students at the AAU? "I empathize with students because I was a student. It's all about encouragement. It helps you move forward, because to be encouraged when you're young is everything. I come from a tiny village in the west of Ireland. I have seven brothers and one sister. My mother was a baker. Alexander McQueen's father was a taxi driver and his son became a fashion icon. So, I believe in that. You can come from nowhere and go everywhere. It's all about talent. It's not where you come from."

Fashion
This Might Be Chromat’s Most Inclusive Swimwear Collection Yet
Becca McCharen-Tran is waiting for a call from DHL. The samples from Chromat’s Spring 2022 collection of inclusive swimsuits — for trans femmes, non-b
by Carli Whitwell
Style
Costume Institute’s New Exhibit Highlights American Fashion’s Ove...
What is American fashion? A little less than a year ago, the Metropolitan Museum of Art’s Costume Institute began to answer this question with the “In
by Irina Grechko
Best Wedding Dresses
Meet The Bridal Designers Behind Some Of Today’s Coolest We...
Welcome to Aisle Style, a week-long series that features the most untraditional wedding fashion trends, bridal designers behind the coolest wedding lo
by Fawnia Soo Hoo
Advertisement
Designer Collaborations
Iris Apfel x H&M Is Here — Here’s How The Style Icon Wants You To...
by Irina Grechko
Designers
Alexander McQueen Returned To NYC After 20 Years With A Nature-In...
There was a lot of talk about mushrooms ahead of the Alexander McQueen Fall 2022 fashion show. As soon as teasers began to quite literally sprout in the fo
by Irina Grechko
Black History Month 2022
Ruth E. Carter Is Black History, Present, And Future
R29Unbothered continues its look at Black culture’s tangled history of Black identity, style, and contributions to the culture with ROOTS, our annual Bla
by Venesa Coger
Adidas
Gucci’s Latest Collection Includes A Collab With Adidas
After months of rumors, Gucci confirmed that it’s partnering with Adidas with the release of the brand’s fall 2022 collection during Milan Fashion Week
by Frances Solá-Sant...
Designers
Y2K Fashion Defined 2021 — 10 Brands That Led The Charge
by Shelby Ying Hyde
Designers
Virgil Abloh Is A Reminder That Fashion’s Most Prolific Designers...
Barrier-breaking designer. Genre-bending artist. Visionary. These are some of the ways people have described Virgil Abloh after it was announced that the 4
by Irina Grechko
Unbothered
Anifa Mvuemba Took Over D.C. With Hanifa’s First Runway Show & Sh...
Designer Anifa Mvuemba is known for her beloved brand, Hanifa, which is full of vibrant and bold colored designs. On Tuesday (Nov 16), she debuted her firs
by Venesa Coger
Designers
Bottega Veneta Green Was Fashion’s Favorite Color. What Hap...
It was the color of the year — at least, it was for fashion types. Few cared about Pantone’s gray and yellow when there was “Bottega Veneta green”
by Katy Kelleher
Designers
Step Inside Susan Alexandra’s Store, A New York Fairytale Come To...
“We wanted it to look like a fairy godmother took her wand and enchanted everything,” says Susan Korn, the creative director and owner of Susan Alexand
by Irina Grechko
Advertisement
Advertisement
Discover
R29 Stories & News
Watch
R29 Original Series & Films
Shop
R29's Most Wanted