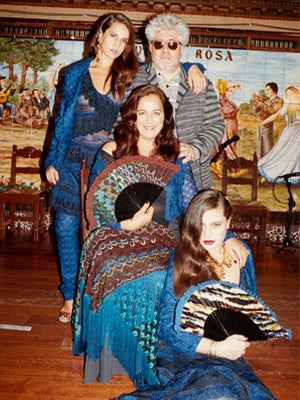 One of fashion's first families, Missoni, have landed a new frontman for their latest campaign — and surprisingly someone who normally stays behind the scenes. Spanish directory Pedro Almodóvar, most recently lauded for his twisted drama, The Skin I Live In, makes his modeling debut (at least, we think it's his debut) in Missoni's newest ad campaign.
While we'll admit that Almodóvar may not be the most obvious choice of model, we think he makes a sweet addition to some of the Missoni family albums as he poses alongside Angela and her daughters. Flexing his (somewhat) natural posing prowess, Almodóvar helps represent the strong Spanish influence infused in the spring '12 line. Other, more-seasoned models in the Missoni ads include Mariacarla Boscono, and actresses Rossy de Palma and Blanca Suarez, all shot in Villa Roma, a Madrid destination we'd certainly like hit up for their tapas and flamenco scene (as per Angela's suggestion).
You'll have to wait until March to see all the Missoni fiesta photos in print, but feel free to preview some more snaps at the link. (WWD)

News
Apparently Don Jr.’s Ex-Wife Left Him For A Secret Service ...
Shockingly, Donald Trump, Jr.’s ex-wife, Vanessa Trump, came to the realization that she didn’t have to spend her life with someone whose own f
by Lydia Wang
News
A Tiger Is On The Loose In Texas, So Of Course Carole Baskin Is G...
Remember when Netflix’s Tiger King aired somehow both two months and nine years ago? Since becoming a household name in March 2020, Carole Baskin — the
by Lydia Wang
News
There’s A Reason Caitlyn Jenner Didn’t Vote For Trump...
It’s difficult to convince people you aren’t a fan of Donald Trump when you’re working with his former campaign manager, but Caitlyn Jenn
by Lydia Wang
Advertisement
News
A Fort Bragg Sergeant Has Been Accused Of Killing Another Soldier
Tiara Vinson, a soldier stationed at Fort Bragg in North Carolina, is being held at Cumberland County Jail accused of murdering fellow soldier, Kelia Horto
by Sarah Midkiff
News
Why Everyone Is Talking About Andrew Yang’s Israel Tweet
Update: On Wednesday, Andrew Yang responded to backlash following his tweet about Israel with a new statement, backtracking his previous stance and voicing
by Lydia Wang
News
SNL Is Accused Of Cultural Appropriation In A Sketch About...
Update: In response to the backlash against SNL, co-head writer and “Weekend Update” anchor Michael Che posted a statement on Instagram. “
by Asia Ewart
Unbothered
R29’s Global Editor-In-Chief Gets Candid With Symone Sanders
Symone Sanders is no stranger to success. At 25, she became the youngest presidential press secretary on record while working alongside U.S. Senator Bernie
by R29 Unbothered
News
Marjorie Taylor Greene & Matt Gaetz Joined Forces In The Rally Fr...
There are bad dreams, there are full-on nightmares, and then there’s what unfolded on Friday night in a ballroom in The Villages, a retirement community
by Danielle Campoamor
Asian American
The Asian-American Activism You Won’t See On Instagram
The most effective work that's being done to protect and support our communities isn't meant to look nice on social media.
by Kim Tran
Unbothered
An Offering For Ma’Khia Khi’Riana Ty’lea Bryant, Who Deserv...
On April 20, woven in-between the breaking news of Derek Chauvin’s conviction in the murder of George Floyd, TikToks of 16-year-old Ma’Khia Bryant made
by Amber J. Phillips
News
There Were 9 Mass Shootings In The United States This Weekend
On Sunday, while the majority of Americans were observing Mother’s Day, a gunman walked into a birthday party at a mobile home park in Colorado Springs,
by Danielle Campoamor
News
Cult Leader “Mother God” Was Found Dead & Mummified. ...
When a man walked into a Colorado police station last week to report a dead body in his home, the officers dispatched to the scene were likely not expectin
by Leora Yashari
Advertisement
Advertisement
Discover
R29 Stories & News
Watch
R29 Original Series & Films
Shop
R29's Most Wanted