Skip navigation!
Story from Politics
It's been said many times over that tonight's Costume Institute gala is fashion's answer to the Oscars, so it should be a given that the gowns and outfits should be some of the industry's boldest. However, the master of ceremonies, Anna Wintour, isn't leaving the dress code entirely up to chance; WWD reports that she's told all the editors at Vogue that they must wear pink, as an ode to the late Elsa Schiaparelli, who will be honored along with Miuccia Prada this year at The Met.
Anna has also reportedly requested that her editors send through photos of themselves in their dresses along with a few different hairstyle options, for approval. Oh, Anna. Didn't you know that that we wear pink on Wednesdays, not Mondays?
Photographed by Ryan Koopmans; Alexander McQueen Anemone Dress, $4,825, available at Matches; Jason Wu Gazar Gown, $9,960, available at Net-a-Porter; Zac Posen Satin-Crepe Gown, $2,790, available at Net-a-Porter. 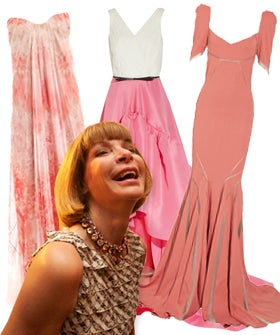