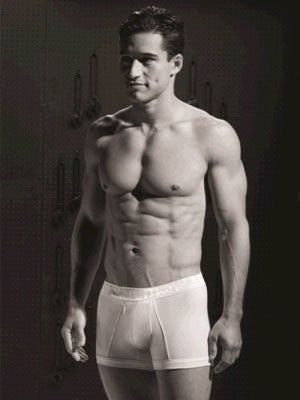 Last we heard, Extra's Mario Lopez was a contestant on Dancing with the Stars and then the host of America’s Best Dance Crew, but no matter what he does or how well he does it, we’ll always know him as A.C. Slater, the jock with the mullet from Saved
By The Bell. So we're not sure if his newest venture—launched in December— is creepy or, umm, hot—we may or may not have had a post of A.C. above our teenage bed. The 38-year-old Mexican-American with abs that could cut glass has launched a men’s "premium" underwear line, RatedM, and will be unveiling the collection with a runway show (aka man-candy central) at Aventura Mall’s Bloomingdale's next week. Lopez says RatedM (which must also be rated X) is “fun, sexy, smart, and doesn’t take itself too seriously." How briefs and boxers can be all these things is beyond us, but we’ll take his word for it. (Accidental Sexiness)