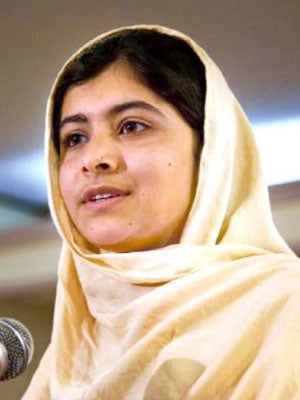 Being a woman in 2012 might be a particularly interesting intersection of politics, feminism, and style, but that doesn't mean it's always easy. Case in point: Right now, in Pakistan, a 14-year-old girl is lying in a coma because of her admirable advocacy for her own education — and the violent Taliban reaction to it.
Malala Yousafzai is a teen girl from the northern part of Pakistan known as the Swat Valley — nestled at the base of the Hindu Kush mountains, it's a place known for its breathtaking beauty. Also, for staggering violence, as it is home to a hotbed for Taliban activity. On her way home from school on October 9, gunmen stopped her bus filled with schoolgirls, asking them to identify Yousafzai or else risk being shot. Upon IDing her, they shot the 14-year-old in the head, twice. She survived, but is currently in critical condition, and while she is stable, the extent of her damage is unknown.
Advertisement
We can pretty clearly outline why this happened, but the events of the past few days, following the shooting, make clear another point: This young girl's story matters so much more than just a tale of heartbreaking, senseless violence — and while her words have been powerful, but not necessarily groundbreaking, her lone voice has now been amplified by this horrific tragedy, and it's worth more than a moment of our notice.


When she was an 11-year-old girl, Yousafzai started blogging for the BBC's Urdu division, writing about her life and her fears. Her words were strikingly wise, but her fears and dreams would feel universal to any of her peers across the globe. In 2009, when the Taliban began to restrict girls' access to education and burned down a range of all-girls schools, Yousafzai anonymously documented her experience and continued going to school despite the danger. On January 3, 2009, she wrote: "I had a terrible dream yesterday with military helicopters and the Taliban. I have had such dreams since the launch of the military operation in Swat. I was afraid going to school because the Taliban had issued an edict banning all girls from attending schools. Only 11 students attended the class out of 27. The number decreased because of Taliban's edict.

"On my way from school to home I heard a man saying 'I will kill you.' I hastened my pace... to my utter relief he was talking on his mobile and must have been threatening someone else over the phone."
Advertisement
She stopped being anonymous after the Taliban were driven out of Swat, and she met with President Obama's Special Envoy, Richard Holbrooke. Last year, she was nominated for the International Children’s Peace Prize. She won.
Since being kicked out of Swat, the Taliban have carried out isolated attacks in the area. And after the shooting on Tuesday, a spokesman for the Taliban did indeed take responsibility for it...and ominously promised that, should Yousafzai survive, they would come after her again.

How The Taliban Failed:

Just for a moment, ignore the mind-numbing rage you feel, consider the idea of a terrorist organization attacking an 14-year-old, and realize that Yousafzai has become a brave beacon of hope. Similar to the women of Pussy Riot, who had a localized protest blow up into a national political ordeal because of the unrest they represented, by shooting Yousafzai, the Taliban has ensured that global news outlets will know her story and (hopefully) take an interest in her protection — and the protection of many other girls fighting for their education.

In an op-ed for The New York Times, Pakistani development analyst Syed Fazl-E-Haider wrote, "Everyone is condemning the Taliban and praying for Malala. She has become a role model for her country’s young generation. She has won." Similarly, The Atlantic points out that the attack against a young woman has galvanized the Pakistani population — perhaps to the point where a major anti-Taliban initiative could be undertaken internally. "As Pakistani politicians line up to condemn the shooting, commentators are pondering whether the tragedy can galvanize public opinion against the Pakistani Taliban enough to support a large military offensive against them. If that becomes the case, the Taliban gun that was fired at a schoolgirl to enforce a radical interpretation of Islam will officially have backfired." No public figure, no matter how staunchly fundamentalist in ideology, will support the attempted assassination of a 14-year-old girl.
Advertisement

Why We Need To Keep Talking About Yousafzai:


While we aren't equipped to tackle the teachings of Islam or efficiently unpack violence a world away, it is important to point out that it is the Taliban, not Islam, that is anti-education. In fact, until recently, another Islamic republic, Iran was a beacon of opportunity for educated women, with over 60% of college students enrolled in the country being ladies. But as radicalization has spread, along with it has come the fear of change.

But today, the world is listening to Yousafzai and her peers, and even more importantly, people are thinking about how important it is for young women in Swat, Pakistan — and across the globe — to have access to education. Also, to Pakistan's credit, the gunmen have at least been found and arrested.
Ultimately, Yousafzai's story is rife with tragedy, but also a source of hope. There is power when you fight. There is a possibility when your message is heard. So, let's not stop talking about Yousafzai, her desire to learn, her will to challenge an oppressive regime, and her courage in speaking out. After all, education is the best investment in the fight against oppression and violence.

Unbothered
Russian Court Denies Brittney Griner’s Appeal, Upholds 9-Ye...
UPDATE: On Tuesday (Oct 25), a Russian court rejected WNBA star Brittney Griner’s appeal of her nine-year prison sentence for drug charges. After the
by Ineye Komonibo
Unbothered
Say Goodbye To Macy Gray — She Outed Herself As A TERF
On July 4, a day when selective freedom was celebrated in America, it was only fitting that Macy Gray chose to go on known bigot Piers Morgan’s show Unce
by Wisdom Iheanyichukwu
Unbothered
White Supremacy Is To Blame For The Buffalo Massacre. That’s It.
A clip of CNN reporter Victor Blackwell breaking down in tears live on air while talking about last weekend’s horrific massacre of 10 Black people in a B
by Kathleen Newman-B...
Advertisement
Unbothered
Megan Thee Stallion’s Bombshell New Interview Reveals Devastating...
In July 2020, Megan thee Stallion was involved in an intense police stop after attending a celebrity pool party in Los Angeles, leading to the shocking rev
by Ineye Komonibo
Unbothered
Ari Lennox Shares An Update After Her Amsterdam Arrest
Updated December 2, 2019: Days after being detained at Schiphol Airport in the Netherlands, Ari Lennox has resurfaced on social media to give worried frien
by Ineye Komonibo
Unbothered
Two Men Convicted For The 1965 Assassination Of Malcolm X Have Be...
Nearly 60 years after the shocking assassination of civil rights leader Malcolm X, a new development in the investigation into his murder has led to t
by Ineye Komonibo
Unbothered
The Zombification of Whitney Houston
In Haitian mythology, the idea of what we now call zombies emerged from enslaved Africans’ deepest fear: not even death would bring freedom. Though suici
by Brooke Obie
Unbothered
Actually, Netflix, Content Like Dave Chappelle’s Transphobic Come...
Update: Netflix has fired the employee who was organizing an upcoming walkout (set to happen Wednesday, October 20) of trans staffers and allies in protest
by Kathleen Newman-B...
Unbothered
Years After Her Death, The Science Community Is Still Treating He...
In the 1950s, a Black woman named Henrietta Lacks walked into Johns Hopkins Hospital to be treated for cervical cancer, and her cells would go on to b
by Ineye Komonibo
Somos Libres
Why Black Puerto Rican Women Are Leading an Anti-Racist Media Ren...
While the 2020 Census was essential to many communities across the United States, it held a different meaning for Puerto Ricans. Battered after a decades-l
by Frances Solá-Sant...
Unbothered
R. Kelly Facing Life In Prison After Being Found Guilty Of Racket...
This story contains discussion of sexual violence. Please proceed with care. Updated September 27, 2021: Months after being charged and indicted for nine g
by Ineye Komonibo
Unbothered
Jennifer Hough’s First On-Air Interview About Nicki Minaj &...
*Editor’s note: this story contains discussions about sexual violence, threats, and intimidation. Please read with care.  A month after publicly all
by R29 Unbothered
Advertisement
Advertisement
Discover
R29 Stories & News
Watch
R29 Original Series & Films
Shop
R29's Most Wanted