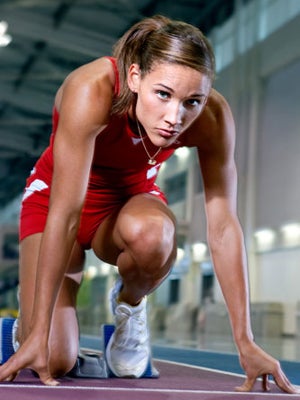 Days after being named the best gymnast in the world, Gabby Douglas found herself upside down, clutching onto a balance beam with only her legs. When asked about her lackluster performance at the individual event finals, the champion responded, "I think toward the end of the Olympics you get mentally and physically tired, and you're just, like, drained." Of course, the fact that athletes have unlimited cell, computer, and internet access in the Village probably didn't help either. We're guessing being so easily connected all the time made it nearly impossible for Douglas to ignore the conversation exploding on Twitter over her hair, of all things. Before the beam competition, Gabby commented on the beauty fuss, asking, "Are you kidding me? I just made history. And you're focusing on my hair?”...and rightfully so. But, it's not difficult to imagine a connection between a massive wave of negative feedback and the cracked concentration of an Olympic champion.
Advertisement
For competitors who go from long, grueling days, months, and even years of training in small cities to headline news in every newspaper across the entire world, the attention can be a lot to take in (let's be honest, we don't live in small cities, and our training regimen is hardly intense, but we would struggle, too...a lot). Suddenly, the amount of people discussing your appearance, your performance, or even your virginity can reach the multi-millions. And, no other example from the 2012 Games illustrates the point more clearly than this week's hubbub surrounding Lolo Jones.
The U.S. hurdler was not a shoo-in to win gold. Actually, Jones is known more for failing than for success — at the 2008 Beijing Games, she clipped the ninth hurdle and kissed her Olympic gold-medal dreams good-bye, only to find out her miscalculated hurdling actually was due to a spinal-cord injury that required a serious surgery, which she underwent just one year ago. She captured America's sweetheart status — despite only netting a slim chance to top the podium — on the basis of her struggle on the track, triumph against a rough childhood, and dedication to saving herself for marriage. And, of course, all of those things became tabloid fodder in the weeks leading up to the games.

Then,
The New York Times
article came out. Just days before her race, the newspaper questioned why she's so famous for accomplishing so little, why her looks have gotten her this far, and, eek, why she was playing into the idea that women are only valid competitors if they have sex appeal. "I just thought that was crazy because I work six days a week...for four years for a 12-second race. And the fact that they just tore me apart — it was just heartbreaking," she told the Today show in tears.

Advertisement
While one hurdler was wondering how her own country's media could tear her down, her U.S. teammates, on the other hand, were pondering why they hadn't been getting the attention in the first place. Dawn Harper, the top-ranking American hurdler who nabbed the silver medal this year, seemingly broke her prayer-based method of dealing with the uneven pattern of press attention earlier this week. Harper also grew up having a tough life. Harper also worked multiple jobs to support herself running. And, Harper even ran her gold-medal winning race in '08 — that one Jones famously lost — in borrowed spikes, since she had no endorsements. And, jealous or not, Harper believes she deserved the attention instead. "Uhhh, I'd say I was pretty interesting," the medalist told NBC Sports Wednesday morning of her challenges and coverage-worthy journey. "I just felt as if I worked really hard to represent my country in the best way possible...because their favorite didn't win all of sudden, it's just like, 'We're going to push your story aside, and still gonna push this one.' That hurt. It did. It hurt my feelings."
The problem here is not that one person has more of a feature article-worthy background than the other. It's that it shouldn't even matter. Once athletes, who are famous not for their struggles but for their extreme ability to perform alongside the best of the world, start concerning themselves with fame and glory outside the track, arena, or gymnasium that they're turning their focus toward an end goal that's dramatically shifted from their athletic one. It's true that Douglas, Jones, and Harper faced immense challenges to get where they are today — but hasn't every athlete? Whether it's a tough upbringing, a recurring injury or even cultivating a natural ability, every single person competing in London has their own kind of heroic story revolving around struggle, oppression, or overcoming the odds. No one accidentally winds up on top of that podium, and this latest wave of inescapable criticism seems to be affecting athletes like never before.
Advertisement
Even a few games ago, things weren't as insular. Twitter didn't exist (by the last summer games, it did, but the fact that they were being held in Beijing severely restricted any sharing going on). Articles didn't pop up on the internet and get passed around instantaneously. You couldn't watch a gymnastics meet, track race, or swimming heat wherever and whenever you wanted from the tiny device in your pocket and then send your thoughts to everyone you knew. It's hard not to think that the attention on the Olympics — which has evolved from a nighttime broadcast and daytime newspaper articles to a 24-hour athletic frenzy — has played a part in the unignorable faceless chorus rallying against you, your teammate, or someone else who you think doesn't deserve it.
After all, Jones' heat earlier this week was the fastest 100m hurdles race in Olympic history. And even though she lost, she still ran her best race of the season while in London's Olympic Stadium. We're not saying that the non-medalist deserves any more or less attention, but we can't help but agree with the sentiment she tearfully rounded her interview out with, which is hoping that her journey inspires a young girl to take a shot at the Olympics, too. Heroes don't always come home with a gold medal around their neck, after all.

Best of Netflix
Everyone Is At Home Watching These 10 Shows & Movies On Netflix R...
by Ineye Komonibo
Best of Netflix
Ginny & Georgia Looks Like The New Gilmore Girls — ...
“[We’re] like the Gilmore girls, but with bigger boobs,” one-time teen mom Georgia (Brianne Howey) declares to her 15-year-old daughter G
by Martha Sorren
TV Recaps
R29 Recaps: Every Episode From Ginny & Georgia Season 1
Content warning: The following recap contains mild descriptions of self-harm. Ginny & Georgia has more than a few major commonalities with Gilmore Girl
by Jean Bentley
TV Shows
Upcoming The Bachelorette Season May Be Recasting Its Lead
To say that the Bachelor franchise is a whole mess right now would be an understatement, to say the least. The reality TV series is finally being forced to
by Natalie Morin
Movies
The Trailer For Tina Turner’s New Documentary Is Simply Th...
In the 1993 Oscar-nominated film What’s Love Got to Do With It, Angela Bassett portrayed Tina Turner so effortlessly that a whole generation of kids
by Ineye Komonibo
TV Shows
The Bachelorette‘s Ivan Hall Wouldn’t Be ...
Ivan Hall, the fan favorite of Tayshia Adams’ season of The Bachelorette, is the most recent Bachelor Nation alum to share his thoughts on host Chris
by Natalie Morin
Music
Meek Mill’s Latest Tribute To Kobe Bryant Didn’t Sit ...
Another day, another controversy featuring a rapper trying to pay homage through questionable lyrics. Just days after DaBaby went viral for an odd verse ab
by Ineye Komonibo
The Bachelor
It Sounds Like Rachel Lindsay Is Officially Done With Bachelor Na...
Being the lead of a popular series like The Bachelor isn’t ever easy, but being the first Black lead comes with its own slew of specific struggles. Since
by Ineye Komonibo
Pop Culture
Shailene Woodley, Fiancée Of Famous Sports Man, Has Never Been To...
The rumors are true: Shailene Woodley is engaged to Aaron Rodgers. The actress confirmed that both she and her son (labrador retriever Spinee) are both ver
by Natalie Morin
Movies
Alice Wu’s Movies Smash Stereotypes — Here’s What Mak...
Alice Wu’s films have something powerful in common: They’re tender queer love stories about women struggling to find their voice. It’s a
by Morgan Baila
Books & Art
The Sordid Tale Of The Woman Who Scammed Marie-Antoinette
Excerpted from Confident Women by Tori Telfer. Copyright 2021 by Tori Telfer. Published with permission from Harper Perennial and HarperCollins Publishers.
by Tori Telfer
TV Shows
Sorry Vibrator Katie, Serena P. Made The Best Bachelorette...
“I think that it just comes down to the fact that I don’t think that you’re my person.” With those very Grey’s Anatomy words in Monday night’s
by Ariana Romero
Discover
R29 Stories & News
Watch
R29 Original Series & Films
Shop
R29's Most Wanted