Skip navigation!
Story from Entertainment
What do monks and Lady Gaga have in common? Aside from attempting to reach Nirvana, Gaga is going co-coon and taking a vow of silence (and, of course, talking about it). What?! Probably the last time you'll hear her on air (at least for now) will be on this Sunday's pre-recorded episode of Oprah's Next Chapter, where the singer will announce her vow of silence (now already into effect). She told Ms. Winfrey herself, "Other than this interview, Oprah, I do not intend to speak to anyone for a very long time...No press, no television."
WOAH. Could be social suicide (like deleting your Facebook?). But fear not, Gaga still has a Twitter (the first lady to accumulate 20 million followers, actually), and we all know tweeting doesn't count as talking, right?.
What do you think? Is she just trying to keep her Poker Face or is this for real? Tell us in the comments below! 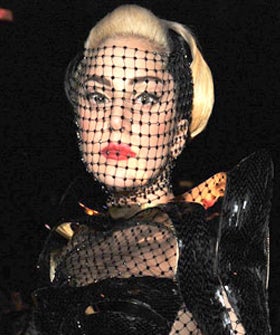 Photo: Courtesy of E! Online
Unbothered
Of Course Succession Fails Its Black Women Characters — ...
This story includes Succession season 3 spoilers.  If you’ve ever been a Black employee in boardroom full of white executives — truly, my least fa
by Kathleen Newman-B...
Somos Latinx
Latin Music Has Taken Over the Globe—But Where Are the Women Prod...
Producers are the backbone of every song listeners grow to love—especially amid the lilts and thumps of Latin genres like reggaetón, dembow, Latin trap,
by Ecleen Luzmila Ca...
GG Good Game
Resetting The Game: How The Unbreakable BrookeAB Took Her Life Back
She’s seen two years of harassment and death threats so intense that the FBI had to step in. Now, the Twitch streamer has a message for her tormentors: I
by Melissah Yang
Advertisement
GG Good Game
Gaming Is Becoming Accessible, But We Need To Keep Asking For More
On her left arm, Twitch streamer LittleNavi has a tattoo of WASD, the four keyboard keys PC gamers typically use to move their characters. “It’s ironic
by Jennifer Mulrow
GG Good Game
G2 Esports’ Michaela Lintrup Makes The Case For Women’s Lea...
“Having that raw, crisp aim, and you just tap and someone dies, is so satisfying,” Michaela Lintrup says, her fingers punctuating each word. Sitting on
by Melissah Yang
GG Good Game
Black Women Gamers Aren’t Unicorns — They’re The Future
Many people still think that being a gamer and a Black woman is a juxtaposition. It’s not. We’re not unicorns. Just like in any other industry, there a
by Jay-Ann Lopez
GG Good Game
LGBTQ+ Streamers Still Need Answers After This Summer’s Hate Raids
In early August, LGBTQ+ Twitch streamers began sharing clips of a growing and frightening phenomenon: hate raids, in which mass bot accounts would spam off
by Samantha Puc
Unbothered
Janelle Monáe Is Writing A Short Story Collection Inspired By
Janelle Monáe is making her literary debut with The Memory Librarian: And Other Stories from Dirty Computer. Based on the Afrofuturistic world of Dirty Co
by Stephanie Long
Unbothered
Ari Lennox Shares An Update After Her Amsterdam Arrest
Updated December 2, 2019: Days after being detained at Schiphol Airport in the Netherlands, Ari Lennox has resurfaced on social media to give worried frien
by Ineye Komonibo
Entertainment
The ‘Jennifer Lawrence Pipeline’ & The Impossible Standards For W...
Jennifer Lawrence is back. The Oscar winner who was once the self-deprecating crown jewel of the Hollywood scene has been moving in the shadows in the past
by Maggie Zhou
Unbothered
The 10 Best Black Corny Christmas Romances Of The Season
by Kathleen Newman-B...
Unbothered
Virgil Abloh & Chadwick Boseman’s Deaths Remind Us That Black Art...
“I don’t have to do nothin’ but stay Black and die.” This oft-repeated phrase in Black communities of a certain generation tells a story of people
by Gloria Alamrew
Advertisement
Advertisement
Discover
R29 Stories & News
Watch
R29 Original Series & Films
Shop
R29's Most Wanted