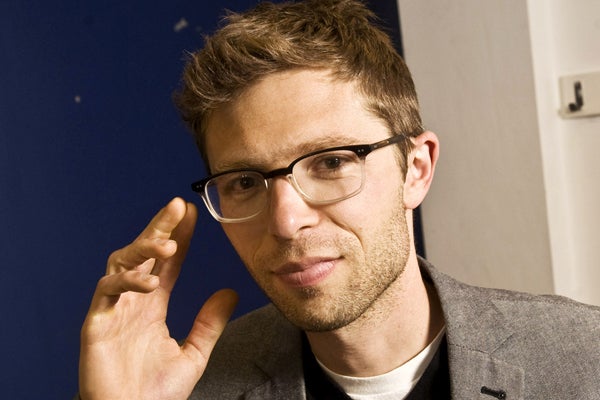 According to our marketing surveys, many of you work in media or at least hang with folks who do. Our surveys also suggest you like mojitos — so, you know they're on-point. Given that, you've probably either been following the precipitous fall of The New Yorker staff writer Jonah Lehrer, ensuing from charges of plagiarism and outright lying in articles and books or are scratching your head and wondering what the big deal is.
It's not so uncommon for journalists to lie — true — and there may seem little that's uniquely compelling about this case. But, trust us, there is.
Advertisement
Already a veteran of NewYorker.com, The Wall Street Journal, Wired, and other publications, as well the author of three books — Lehrer is, by his own account, guilty of lazily repurposing his own text throughout his work, failing to attribute some comments from other authors, and reediting or making up a few choice quotes from that far more famous cultural magpie, Bob Dylan.
That makes him both a fabricator and a plagiarist, but his transgressions are relatively minor compared to other fallen literary darlings. Think about major offenders like journalists Stephen Glass, Jayson Blair, Nick Sylvester, and ESPN's (still employed) Lynn Hoppes or book authors Laura Albert (JT LeRoy), Clifford Irving, Kaavya Viswanathan, and Quentin Rowan, and Lehrer starts to look like a very petty criminal.

Correspondingly, there will be no appearance on
Oprah, biopic, or protracted lawsuit following Lehrer's resignation from The New Yorker staff. Indeed, since the news broke on Monday, the issue is stabilizing and fading (though it could surely flare up again if other lies or thefts surface.) Though the recall of his book, Imagine: How Creativity Works, will cost his publishing house a bit of scratch, neither they, nor The New Yorker will experience any serious fallout from these limited (if low and troubling) sins. Ultimately, Lehrer should be (and will be) the only one feeling pain here. And, yet, this revelation has sparked more sadness — within the industry and among readers — than outrage, a marked departure from how the public treated James Frey or Mike Daisey.

Advertisement
As Roxanne Gay notes in a brilliant Salon article, those who knew Lehrer tended to think he was a genius. He was the portrait of the overachieving writer as a young man and, at only 32, his pedigree near perfect. A Columbia University graduate (where he edited the Columbia Review and worked in the lab of a Nobel-Prize winning scientist), Lehrer studied literature as a Rhodes Scholar at Oxford, wrote with a novelist's flourish about science, electrified audiences with his TED Talks, married another attractive journalist, had a child, sold thousands of books while crafting articles for some of the most respected, forward-thinking publications in the world, and bought a beautiful, minimalist home (a landmark) in the Hollywood Hills. All the while, he seemed to produce his work and electrifying thoughts with an easy, astounding fluency.
In short, Lehrer seemed to be exactly what everyone in media wishes they were. The squalid truth that, he could be lazy, and, critically, so flummoxed by deadlines and demands that he would resort to cheap tricks, betrays those wishes and makes our dreams seem that much more impossible.
See, so many of us in so many fields falsely imagine that, once attained, success is self-sustaining — a terminal state of pleasure and achievement. With Lehrer we have to confront the reality that it's merely a point on a continued incline. For some, it's a reminder that no matter how gifted you are (or aren't) there really is no brass ring and that everything you're striving for is really just...more work.
Advertisement
Is that depressing? It shouldn't be for anyone who defines success as loving what you do, and doing it well. If that's not the case, well, let this be your wake-up call.
Also, side note, the producers of this film must be psyched!