Skip navigation!
Story from Celebrity Beauty
While cycling her way to a gold medal, Joanna Rowsell was just a normal girl with Olympic-level athletic skills. Then she took her helmet off. And you know what? She was still just a normal girl with Olympic-level athletic skills, despite the fact that she is diagnosed with alopecia (a disease causing hair loss on the head and various other parts of the body).
Joanna Roswell became an instant superstar for two reasons: her Olympic victory and her relatively unexamined decision not to wear a wig while accepting her medal. And it's her laid-back attitude about this non-event that's most inspiring. While we're all for championing the cause, sometimes the best way to fight prejudice is just to ask: What's all the fuss about? Roswell told The Daily Mail that "on one level it was a case of 'this is just me'. I get off my bike, take my helmet off and that’s who I am. I did know it would be making a statement — I just didn’t anticipate the size of the reaction." While Joanna does own a number of wigs, which she rotates based on her mood, her obvious lack of apprehension when it comes to revealing her condition gave a boost of confidence to people with alopecia around the world. She received hundreds of messages thanking her for her bold statement, but says she doesn't want to be known as "the girl with alopecia."
Alopecia's only symptom is hair loss. That's certainly a difficult obstacle to face, especially as a young girl. But Joanna has amazing perspective on the issue, and though she admits to having struggled with her appearance for years, she now confidently says, "There’s part of me that thinks: 'I’m not ill; there’s nothing wrong with me.' Most of the time I don’t think about it." We couldn't agree more. (The Daily Mail) 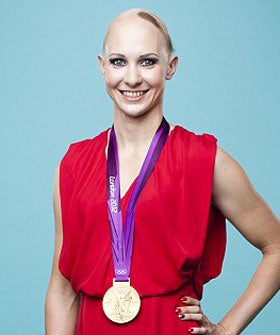 Image via The Daily Mail.
Beauty
Naps Are The Key To This Esthetician’s Good Skin — Here’s H...
Lesley Thornton is an LA-based holistic esthetician & founder of eco-inclusive sustainable skincare line, KLUR. It is one of the very first Black, esth
by Amanda Mitchell
Beauty
Kim Kardashian On The Skin-Care Product She Can’t Live Without: &...
Let it be known: as far as holidays go, Kim Kardashian is way more into Christmas. “I’m so not a Thanksgiving person. Don’t like it,” she t
by Sara Tan
Beauty
Where Is Desirability’s Place In The Modern Age?
In 2014, Vogue declared in an article that “the big booty has officially become ubiquitous.” With that, the cultural behemoth ushered in what they term
by Zoë Huxford
Advertisement
Beauty
How Claire Saffitz Eats Dessert Every Night & Still Has Great Skin
Claire Saffitz is a bestselling author, recipe developer and video host with over one million YouTube subscribers. She has a new cookbook What’s for Dess
by Amanda Mitchell
Asian American
Gemma Chan Swears By These Drugstore Serums For Her Skin
Gemma Chan can now add runway model to her already impressive resumé. On October 2nd, the Don’t Worry, Darling actress wore a black, asymmetrical Lo
by Sara Tan
Beauty
Billie Eilish Got Real Honest About All The Celeb Beauty Lines Ou...
Listening to a Billie Eilish song for the first time feels as though you’ve entered an alternate dimension. The Grammy Award-winning singer somehow m
by Amanda Mitchell
Beauty
Summer House’s Paige DeSorbo Predicts The Next Wave Of Beauty Trends
As an unapologetic Bravo scholar, my years of anthropologically studying the network’s outputs in near repetition has allowed me to say a true fact: The
by Amanda Mitchell
Beauty
Let’s Hear It For Florence Pugh’s Makeup At The Venic...
In case you haven’t heard, last night’s Venice Film Festival premiere of Don’t Worry Darling had people worried, darling. The film, direc
by Megan Decker
Gloss Angeles
The Beauty Community Has An Unsolicited Advice Problem
As everyone knows, going viral isn’t necessarily a good thing, especially on TikTok. Recently, nurse practitioner Miranda Wilson (@np.miranda) made a vid
by Kirbie Johnson
Beauty
Tati Gabrielle’s Natural Hair Played A Key Role In Her Success
Tati Gabrielle changes her hair all the time. Whether it’s playing with the color, length, or style of her natural hair, the only constant is that it
by Claire Hambrick
Beauty
Mark Tuan Is Putting Mark Tuan First
I met Mark Tuan on a Zoom call on a Tuesday afternoon in late July. He’s wearing a black bucket hat and white tee while sitting on a couch in his family
by Lexy White
Beauty
From Malibu To Williamsburg, Inside Kaia Gerber’s Jetsetter...
After spending a Sunday by the pool at her parents house in Malibu, Kaia Gerber slides her Five-Minute Journal in a pre-packed carryon and catches a red ey
by Megan Decker
Advertisement
Advertisement
Discover
R29 Stories & News
Watch
R29 Original Series & Films
Shop
R29's Most Wanted