Skip navigation!
Story from Entertainment
The classic rags to riches story gets even bigger, and we're not just talking about Annie the musical. Since our beloved Jay-Z sampled the soundtrack in "Hard Knock Life" back in '99, he's won 14 grammies, started the '90s streetwear staple brand Rocawear, and married People's most beautiful woman of 2012 (and let's not forget about Blue Ivy). Now, Jay-Z is set to head the music of the new blockbuster, high-budget update of Annie. And, you know a remake of "Hard Knock Life (Ghetto Anthem)" is certainly in store (squeals!). The movie, written by Brit actress Emma Thompson, will be set in modern-day New York starring Willow Smith (a far cry from Annie's red hair but still just as fiery, what with all the hair whipping!). While the new version will exclude some of the old songs, "Tomorrow" made the cut, alongside some original new music from Jay-Z himself.
Life is good for Mr. Shawn Corey Carter. So it's about time, over a decade later, for the dapper rapper to revisit his humble beginnings. And no, we're not just talking about a visit to the Marcy Houses in Bed-Stuy — we can almost guarantee a soundtrack that parallels his own interpretation of Annie's narrative. Filming starts early next year (ugh!), but we'll keep an ear to the ground, waiting for any new leaks from the soon-to-be cinematic score of the year! (All Hip Hop) 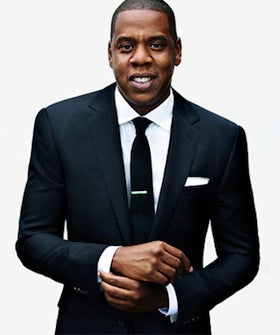 TV Shows
In Conversations With Friends, Everyone’s Insufferable
Deep into Hulu’s Conversations With Friends, there comes a moment of reckoning. Frances (Alison Oliver) — a Dublin-based university student in her earl
by Katherine Singh
TV Shows
The Flight Attendant’s Cassie Is An Example Of White Pri...
In the season 2 premiere of The Flight Attendant, Cassie Bowden (Kaley Cuoco) is still working as a flight attendant for Imperial Atlantic, but now she’s
by Harika Manne
Unbothered
White Supremacy Is To Blame For The Buffalo Massacre. That’s It.
A clip of CNN reporter Victor Blackwell breaking down in tears live on air while talking about last weekend’s horrific massacre of 10 Black people in a B
by Kathleen Newman-B...
Advertisement
Unbothered
Kendrick Lamar Made His New Album For Himself — Not Us
After the 2017 release of his Grammy-winning album DAMN, Kendrick Lamar seemingly vanished into thin air, leaving fans begrudgingly stuck in a loop of list
by Ineye Komonibo
Unbothered
The Wilds Season 2 & TV’s War On “Woke” Characters
Welcome to “What’s Good,” where we break down what’s soothing, distracting, or just plain good in the streaming world with a “rooting for everybo
by Kathleen Newman-B...
Entertainment
Reality TV Is One Of The Most Feminist TV Formats Today. Hear Me Out
Reality TV is a genre that typically features women screaming at each other (The Real Housewives franchise), simpering and competing for the affections of
by Sirin Kale
Somos Latinx
Neruda on the Park Gets the Story of Gentrification in L...
Many have taken on the task to articulate the complexity and harm of gentrification in immigrant, mainly Black and Latine, communities. In just the past fe
by Lorraine Avila
Unbothered
You Loved Blood & Water — Here’s What Else African T...
by Ineye Komonibo
Not Your Token Asian
Chloe Kim’s Newest Trick: Breaking The Role Model Myth
For the two-time Olympic champion snowboarder, the pressure to be the best comes with the task of being a role model for an entire AAPI generation.
by Melissah Yang
Not Your Token Asian
Kelly Mi Li’s Hustle To Create A Bling Empire Has Its Limits
Those who only know Kelly Mi Li as a cast member of Bling Empire might be convinced that her life revolves around her relationship. Her storyline in season
by Olivia Truffaut-Wong
Not Your Token Asian
Redefining The American Dream, Illustrated By 4 AAPI Artists
Immigrants have long pursued the American Dream and its promise of upward mobility, with better opportunities and more fortune. It’s an ideal that th
by Melissah Yang
Unbothered
BBMAs Honoree Lil Miss Flint Is Still Fighting For Clean Water
The Billboard Music Awards are a celebration of top-charting artists and their contributions to music and pop culture, but in recent years, the award show
by Ineye Komonibo
Advertisement
Advertisement
Discover
R29 Stories & News
Watch
R29 Original Series & Films
Shop
R29's Most Wanted