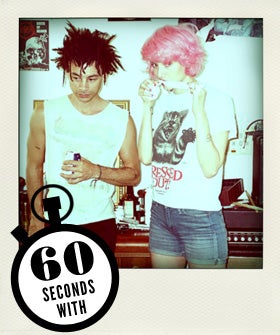 Watching Brooklyn-based duo Hunters play live is one of the more gleefully intense musical experiences you can have. Comprised of dueling guitarist/vocalists Derek Watson and Isabel Almeida, the band plays no-holds-barred garage rock in a whirlwind of pink hair, punk ferocity, and quasi-sexual chemistry. The duo will soon be heading to SXSW where it will be unleashing its trademark whirlwind attitude and guitar on Austin, but before it does, the band sat down with us to talk bloody bang-ups, bad jobs, and the Derek and Isabel's unique take on fashion.
How did you guys first meet?
Derek: "Basically, we had been working at weird jobs, and we met at one job in Chinatown but then we had gone to another. It was this weird place where they made muzak songs of popular hits. It was really atrocious. I think it was the last day that I could actually take working there — they had wanted to do this classical version of a Nickelback song called 'Nickebach.' That was literally the name of the project. I was like, 'I can't do this; it's just ridiculous.' Isabel, how long had you been working there? A week or two?"
Isabel: "Yeah, you had started working there and then you got me a job there. And then we quit like a week after."
Derek: [laughs] "Yeah, I don't think you had even worked on anything. Anyway, we had been talking a lot about music at that point. We had lots of common interests and had been going to tons of shows. So, we just started bouncing ideas off of each other. And I was like, 'Well I have a practice space. Let's go jam and see what happens.' And, that's how it started.
Advertisement
You guys have really intense dynamic on stage — how did you develop your live shows?
Derek: "We've never, ever talked about anything beforehand. I feel like that would be the worst thing in the world. It would almost be like pro wrestling or something. So, yeah, we've never planned anything. I feel like that would be really bad for us. If we planned to do something and then I screwed it up, it would turn into a circus show."
Isabel: "The fun part about playing a show is not really knowing what's going to happen. Our shows just turn into a blur to me. I get on stage, and as soon as we start playing I just get an adrenaline rush and sometimes I can't even remember the show. I see pictures after, and I'm like 'I can't remember doing any of this!' Adrenaline takes over your body, and you're just reacting to the music."
Is there a particularly intense live experience that really sticks out?
Isabel: "I had a concussion before because I hit my head on the floor super hard. I thought that the floor was further from me than it was. I know that doesn't make any sense, but I was jumping around and I hit my head on the floor. It was awful. But at the time, because of the adrenaline, I just kept playing. Then, the next day, I woke up, and my head was swollen, and my eyes were red. I went to the doctor, and they told me it was a concussion and that I shouldn't go to work."
Derek: "I feel like I never know if something wrong is going on. Like I never know if I'm bleeding or bruised or scuffed up, because I'm just playing. The only time I knew during [a show] was when I got cut in the head. A kid was jumping on stage, and I [by] accident hit with a bottle. I knew something had happened, but I just kept playing. Then I saw Isabel's face, and she started laughing and pointing at me because I had blood all over. That was the only time I was actually conscious that something had happened."
Isabel: "I usually just wake up the next day and my whole body hurts. I just deal with it."
Advertisement
Isabel, how would you describe Derek's style?
Isabel: "I think Derek would be a character in a horror movie. Like that kid in Pet Sematary or something. Like, the kid who everyone thought was cool. Derek has worn the same clothes his whole life. He's almost like Bart Simpson. He's worn the same clothes from the time he was 3 until now. You look at old pictures, and he's wearing the exact same thing."
Derek: "Yeah, I think it's a curse because I just haven't grown. I still have the body of a 13-year-old."

Derek, how would you describe Isabel's style?
Derek: "Well, Isabel, now that you have your pink hair you have a psychedelic-weird-muppet-thrift-store vibe. Which I think is awesome."

Isabel: "We both look like Pokémon or something. We both have weird hair."

Why did you decide to go for the pink hair?

Isabel: "I was just bored one day. I had blonde hair forever. It was one of the first things I did when I stared being in charge of myself as a person. As soon as I turned into a teenager, I was like, 'I'm going to have bleached hair!'. And then one day I just had some color at home because I do a lot of my friends' hair. I had some pink left over. I thought if I didn't like it, it would just wash off, but I loved it so I kept doing it. And getting more intense with it. I like it a lot now."

How is the new material going? We heard you were working on some more stuff with former Smashing Pumpkins guitarist James Iha.
Derek: "Yeah, we worked on a couple songs with him and we're doing some other stuff. We don't want to repeat anything exactly the way that we've done it before. No matter who you are, if you're a fashion designer, musician, filmmaker, photographer, or whatever, I think you never want to repeat yourself."
Isabel: "There are definitely a couple songs on the new record that could have been on Hands on Fire, maybe. And people who were really into Hands on Fire will find songs like that on the full length. There will be different types of songs, too, but they will definitely all be Hunters songs. We still have the same influences. Our songs are evolving, but we're just in a different time of our life right now."
Is there a band that's been particularly inspirational for you guys?
Isabel: "We just played a show with Metz and ended up going to see them the next day. It was super inspiring because you can tell they are super into what they are doing. That's my favorite part of going to a show."
Derek: "For me, it's sort of the opposite. I normally like bands that aren't as current. There are a million bands who are making amazing music right now, but I like looking back on things to get clearer influences. Like Randy Holden has really cool records, and I think I've been getting influences from that stuff more."
TV Recaps
The Bachelorette Season 17, Episode 2 Recap: All The Wrong...
It’s time for the first dates of Katie Thurston’s Bachelorette journey and we’re getting a tour of the franchise’s staples. There’s an instan
by Lia Beck
TV Shows
What Did Katie Understand About Cody & Aaron’s Bachelorette
Spoilers are ahead. If you had hoped that the second episode of Katie Thurston’s Bachelorette season would better clear up why contestants Aaron Clan
by Martha Sorren
Entertainment
Who’s Left On Katie’s Season Of The Bachelorette
by Martha Sorren
Advertisement
Entertainment
The Bachelorette Is Changing How It Talks About Sex. Kaitl...
“We can all relate to sex!” Tayshia Adams cheers over a recent Zoom call with Refinery29. While Adams was a gleefully flirty Bachelorette this past win
by Ariana Romero
Entertainment
Michelle Williams Says Destiny’s Child’s “Cater...
When Destiny’s Child wore backless ball gowns in the desert and sang about how they take care of their men, I highly doubt they expected the girls of 202
by Sydney Clarke
Pop Culture
We Have Questions About Every Celebrity Hitting Up Their Ex
Late ’90s/early ’00s fashion trends may be coming back in style, but many celebrities seem to be tapping into their nostalgia in a more drastic
by Natalie Morin
Entertainment
Chrissy Teigen Addresses Past Cyberbullying: “I Was A Troll...
Chrissy Teigen has returned to the internet after a brief hiatus, sharing a long letter to the public that addresses her documented history of cyberbullyin
by Ineye Komonibo
Entertainment
In The Heights Is Being (Fairly) Criticized For Afro-Latin...
The film adaptation of Lin Manuel Miranda’s beloved stage musical In the Heights made its debut last week, promising to offer up the big screen represent
by Ineye Komonibo
Entertainment
The Devil Wears Prada’s Biggest Villain Finally Acknowle...
It’s been 15 years since The Devil Wears Prada captivated audiences with its pointed one-liners and even pointier Chanel boots. It also took 15 years
by Natalie Morin
Movies
I Loved In The Heights — Until The Ending
When I sat in the theater waiting for In The Heights to start, I prayed I wouldn’t be disappointed. My high school musical theater days are the only rece
by Sydney Clarke
TV Shows
Is Love, Victor Finally Giving Us A Bisexual Character?
Spoilers for Love, Victor season 2 are ahead. “This is not what I signed up for,” I messaged my friend midway into Love, Victor season 1. IR
by Martha Sorren
Movies
Meet The In The Heights Movie Cast — & The Original Broadw...
by Leah Marilla Thomas
Advertisement
Advertisement
Discover
R29 Stories & News
Watch
R29 Original Series & Films
Shop
R29's Most Wanted