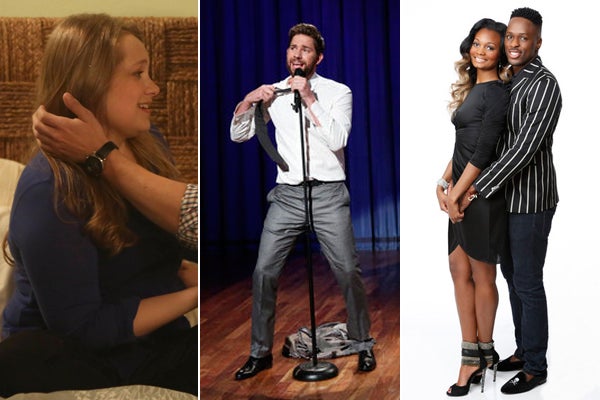 Hump: I’m just loving Merritt Wever as Elizabeth on New Girl, so hard. Even though I think she took Schmidt back way too quickly after he was ridiculously rude to her at his office, I’ll forgive her because when have you ever seen him acting so silly and carefree? I mean, the running man and an XL sweatshirt? Yes to all of the above. And though I fear this is just a temporary diversion to keep him and Cece apart while we get this whole Nick-Jess thing figured out, Wever is still super enjoyable to have around in the process.
Advertisement
And an honorary shout-out goes to Winston because, seriously, poor Wilson (as Nick’s dad calls him). He gets relegated to the C-plot even in an episode called “Winston’s birthday.” It wasn’t even a full-blown plotline, either. He just sort of popped in and out of the other characters’ drama. So, here’s to you and your kick-ass orange tracksuit, Winston. Let’s look through a golden telescope to gaze at the wonder of space and time to celebrate.
Marry: First, John Krasinski won the Internet (and late-night TV) this week when he engaged in an epic lip-synching contest with Jimmy Fallon. He started out softly with a little “Teenage Dream,” but brought it home with a sensual performance of “I’ll Make Love to You” that would rival any Boyz II Men concert circa 1994. Emily Blunt is one lucky lady.
Then, he fully cemented his status in the pantheon of TV dreamboats on the second-to-last episode of The Office, which is closing out with some O.G. pining-for-Pam Jim. When she worries she’s not enough for him, Jim has the documentary crew make them a relationship highlight reel to rival that of any shipper on YouTube. Then, when you think that’s it, he presents Pam with a love letter he wrote years ago but wasn’t brave enough to give her. “Not enough for me? You are everything,” he tells his wife. Cue a million swoons across America.
Kill: Bravo debuted its latest reality horror fest, Newlyweds: The First Year, this week. I’m not sure why any couple would volunteer to have their first year of marriage filmed — didn’t they see what happened to Nick Lachey and Jessica Simpson on their reality show of the same name? Then again, I rarely identify with anyone who chooses to be on non-talent-based reality shows. Still, have these people never heard or seen anything about the first year of marriage? Take a hot second to cut through your haze of hubris to realize that you two are not different, and you won’t defy the odds. It’s difficult for everyone.
Advertisement
By far the worst couple on the show are Alaska and Kim, who fancy themselves tastemakers à la Jay-Z and Beyoncé or the Obamas. Really, though, they’re just kind of self-centered. During a brunch with her bridesmaids, Kim tells all the women they need to lose weight or they won’t be allowed to walk down the aisle at the wedding. Not only that, she sent them an email saying that this is her Martin Luther King-style dream. That’s right, she compared telling her closest friends and relatives to drop a few pounds so they look better in her wedding photos to the fight for civil rights. Those are completely the same thing, Kim.
Then, there’s Alaska, who pulls rank about the fact that their beliefs teach them it’s a wife’s job to support and obey her husband every chance he gets. I understand that religions teach different values and have more strict roles for husband and wifely duties, but the way Alaska lords this over Kim during even the smallest decisions, like choosing sheets, does not bode well for their future. There’s only so much “You swore to honor and obey me, so we’re getting Chinese tonight, not pizza” a person can take.