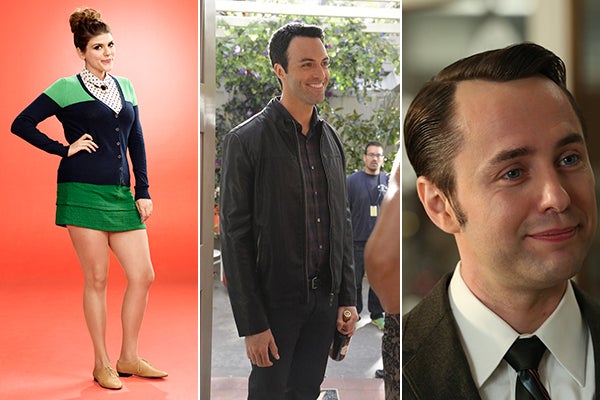 Hump: Awkward made its triumphant return to MTV this week with a supersize season premiere that had everything: a pregnancy scare, the unfortunate demise of a notorious Palos Hills personality, gefilte fish, and Jamara’s official debut as a hot-and-heavy couple. As per usual, though, it was Molly Tarlov as Sadie who stole the show with her epic memorial confession and, of course, “You’re welcome.”
Marry: As someone who has definitely not seen every episode of My Boys and was totally not a PJ/Brendo shipper, it’s really great to see this Reid Scott guy suddenly appearing everywhere. On My Boys (which fine, I’ll admit I might have caught one or two episodes of), he was an adorably scruffy slacker who owned a bar (my kryptonite...and speaking of, did you watch the Man of Steel trailer? Holy Henry Cavill, Batman!). On Veep, Scott plays the underhanded, cutthroat Dan Egan, a role which strips him of all rugged handsomeness and keeps his face shaved to prepubescent boy levels of smoothness — God forbid people who work on Capitol Hill appear human and have five o’clock shadows. Not his best look, but handsomeness cannot remain hidden for long!
Advertisement
On Wednesday, Scott popped up again as a male nurse who pretends to be a doctor to impress Sarah Chalke’s character on the new ABC sitcom How to Live With Your Parents (for the Rest of Your Life). Didn’t we get over the whole murse insecurity thing after Meet the Parents? Have the gender-role perspective shifts of the last decade not yet hit the medical profession? These are all questions I’m sure absolutely no one else is thinking about, so let’s just conclude with the undeniable fact that Reid Scott is hot.
Kill: Oh, Pete Campbell, this could have gone so many other ways. Instead, you’ve become a Don Draper wannabe, having affairs with mentally ill women and a clingy neighbor with a violent, jealous husband. In a way, their lives are paralleling each other — Don’s sleeping with a neighbor, too; and who knows, that could blow up in his face in the future — but this is Pete Smugface Campbell we’re talking about. His wife gave him permission to cheat, and he somehow managed to fail at it. What’s the complete opposite of the expression “Some people have all the luck?” Can we just make it “Sorry you’re such a Pete Campbell?”

Advertisement
Entertainment
Jessica Batten Tearfully Responds To Love Is Blind Backlas...
This post contains spoilers for the Love Is Blind finale, out now. The Love Is Blind hive has grown into a swarm, and its sights are set on Jessica Batten.
by Kathryn Lindsay
TV Shows
All The Singers Left On The Masked Singer Season 3
by Leah Marilla Thomas
TV Shows
The Celeb Behind The Kitty On The Masked Singer Might Be F...
The second group of contestants on the Masked Singer is stacked with secret celebs who consistently deliver nearly pitch perfect performances and choreogra
by Ariana Brockington
TV Shows
The Masked Singer’s Taco Has Probably Been To Infini...
What would we do without The Masked Singer? It is the only show on television where you can watch a grown man dressed as a taco effortlessly, confidently,
by Ariana Brockington
Entertainment
John Mulaney Uncovers Pete Davidson’s Secret Life On Sat...
Will the real Pete Davidson, please stand up? In a new promo for Saturday Night Live starring guest host John Mulaney, Davidson — who recently took a swi
by Kaitlin Reilly
TV Shows
Everyone Who’s Been Unmasked On The Masked Singer Se...
by Ariana Brockington
Entertainment News
Bachelorette‘s Chad Johnson Explains Arrest For Robb...
In a new Instagram video, Chad Johnson shared his side of the story on his recent arrest for robbery. Johnson talked directly to the camera in the video as
by Kaitlin Reilly
TV Shows
All The Celebrities Who’ve Been On The Masked Singer...
by Ariana Brockington
TV Shows
Altered Carbon Season 2 Is John Wick “Gun Fu” — & More S...
A small squad of gun-toting imperial fighters marches through a Vancouver soundstage. The light-up red eyes on their helmets shine through the pitch black
by Ariana Romero
Music
There’s Already A Wild Theory About Taylor Swift’s “The Man...
Taylor Swift has reinvented herself through several different eras of music, but it seems like there’s one common denominator: Kanye West. His infamo
by Kathryn Lindsay
Pop Culture
Prince Harry Just Changed His Name — Sorta
In his effort to transform from a royal famous person to a regular famous person, Prince Harry is making yet another big life change. Prince Harry is now g
by Kaitlin Reilly
TV Shows
The I Am Not Okay With This Soundtrack Is Full Of John Hu...
by Shannon Carlin
Discover
R29 Stories & News
Watch
R29 Original Series & Films
Shop
R29's Most Wanted