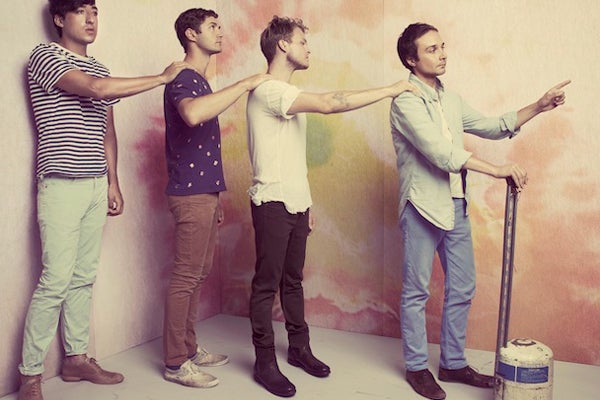 Leave it to space disco extraordinaire Hans-Peter Lindstrøm to turn Grizzly Bear's quietly meditative "Gun Shy" into an effervescent dance-floor banger. For the first four minutes or so, barely a speck of the original Shields standout can be discerned, but that's before Ed Droste's unmistakably honeyed vocals float in over the house keys. It's a moment that simultaneously justifies the track's label as a remix and comes off like a small epiphany. Few producers (if any) are on Lindstrøm's current level when it comes to lush house and meandering disco, and "Gun Shy" shows once again that the Norwegian producer is at the top of his game. While we'd never have guessed Droste's vocals could be transferred so to effortlessly to club setting, Lindstrøm's instincts prove spot on, and we can't help but wonder what else he could accomplish using Grizzly Bear as a starting point.
Advertisement
Grizzly Bear "Gun Shy (Lindstrøm Remix)"
Grizzly Bear - Gun Shy (Lindstrom Remix) by Grizzly Bear

Entertainment
On Jennifer Lawrence’s 30th Birthday, Revisit The Role That Made ...
It’s been 10 years since Jennifer Lawrence became a household name in the aftermath of her unlikely Oscar nomination for Winter’s Bone, a $2 million in
by Anne Cohen
Music
Miley Cyrus’ New Song Confirms Exactly What We Thought Abou...
Just a day after news broke that Miley Cyrus and Cody Simpson had ended their relationship, the songstress is setting the record straight with “Midnight
by Ineye Komonibo
TV Shows
Chris Harrison Is Out — The Bachelorette Names JoJo Flet...
If season 16 of The Bachelorette wasn’t chaotic enough, the show has not only swapped out bachelorettes, but now its host, as well. The ABC show announce
by Natalie Morin
Best of Netflix
Everyone Is At Home Watching These 10 Shows & Movies On Netflix R...
by Ineye Komonibo
Music
Project Power’s Soundtrack Packs Some New Original...
by Lia Beck
TV & Netflix
The Truth About Nandina From Teenage Bounty Hunters
Warning: Spoilers for Teenage Bounty Hunters Episode 9. Whatever the opposite of Liz Lemon’s “I want to go to there” is how I feel about
by Martha Sorren
Best of Netflix
You Have 10 New Netflix Treats To Binge This Weekend — Here’s Wha...
by Ariana Romero
TV & Netflix
Every Character In Teenage Bounty Hunters Is A Secret So...
by Martha Sorren
Music
Chrissy Teigen Confirms She Is Pregnant With Baby No. 3 With John...
Update, 8/14: A few hours after John Legend debuted his new music video for “Wild,” Chrissy Teigen confirmed that she was expecting her third c
by Natalie Morin
Best of Netflix
Netflix’s An Easy Girl & More Movies By Women To S...
by Anne Cohen
TV Shows
Who Actually Can (& Should) Come Back To The MCU After That S...
Warning: Spoilers for the series finale of Agents of S.H.I.E.L.D. are ahead. It may be the end for Marvel’s Agents of S.H.I.E.L.D. but the MCU train
by Leah Marilla Thomas
Music
Bow Wow & Romeo Are Working On A Documentary About Their Rise In ...
Music fans are in a nostalgic mood, thanks to the viral Verzuz competitions that showcase the decorated discographies of some of the industry’s most tale
by Ineye Komonibo
Discover
R29 Stories & News
Watch
R29 Original Series & Films
Shop
R29's Most Wanted