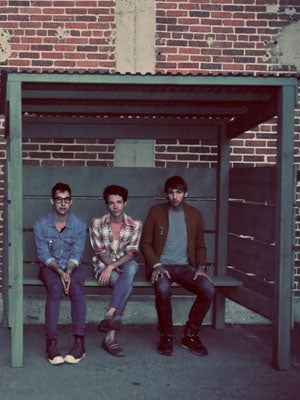 After taking the top-spot on the Billboard 100, it seems fun. is more than just a fad. Despite being around since ’08, it was the band's catchy “We Are Young” featuring Janelle Monáe that prompted overnight stardom and landed them among the top played tracks of our (and your, and everyone's) iTunes. Having released their second album, Some Nights (also a perfect top-down jam of the same name) in February, as well as jumping on board with Monáe’s stateside tour, they’ve been praised with some pretty major hype. As native New Yorkers, fun.‘s Nate Ruess and Jack Antonoff share some city scoop, and school us on music and taste.
Advertisement
Your band has been coined as "alternative," — what advice would you give to young people starting out in your category?
Jacke: "It’s a really big world, but when you’re young it seems like a really small world where it's just people you know and the high school you go to... Ther truth is, as long as you’re being who you are, there’s a place for you."
Hit with overnight stardom, how has this year been?
Both: "Surreal. Honestly, just surreal."

Growing up, who inspired you guys musically?
Nate: "Oh jeez, a lot of ‘80s music like MDC and The Cure. We really do fucking love everything.
Jack: "It probably all started with The Beatles, and then I guess it goes out from there. Springsteen… Fleetwood Mac… I mean, that’s all so inherent in us that when we’re making records now, we take a lot from the artists who are around us."

So who is influencing you now?
Jack: "We’ve talked about it to death but Kanye really has been a huge part of us wanting to make records."
And, you’ve worked with Jeff Bhasker, who has produced for Kanye and Drake; When you set out were you looking to create a particular sound?
Nate: "I think our particular sound has come by just not adhering to any specific sound. For us, it’s about the song, and being able to fit in to what is appropriate. When we sit down, we’re not talking about what type of band we’re gonna be within a specific genre — there’s a uniqueness to all of us individually that throws putting anything in a box out the window."
Advertisement
So, do you boys go out in the city?
Jack: "Well, we don’t go out unless there’s a dinner involved…"

Okay, so let slip where you like to dine!
Nate: "We love the Knickerbocker. And we just went to a bar in Grand Central, that was pretty cool. Where else? Jack loves the Mercer Kitchen.
Jack: "It’s a good restaurant, it gets a bad rap! I used to love Blue Ribbon. I go to the same places over and over again, trying to drag people with me."

Pop Culture
JoJo Siwa’s Response To Shade From Homophobes: “OK!&#...
JoJo Siwa’s recent coming out was just as joyful and sparkly as her signature bows. “Personally, I have never ever been this happy,” she
by Natalie Morin
Pop Culture
FKA Twigs Received “Hurtful” Racist Abuse While Datin...
FKA Twigs recently went on Louis Theroux’s Grounded podcast and opened up about her past relationships, including one with actor Robert Pattinson.
by Natalie Morin
Pop Culture
Exes Kristin Cavallari & Jay Cutler Have Reunited — In A Messy Lo...
Things have been rocky between Kristin Cavallari and Jay Cutler since they first announced the news of their divorce, but it turns out that there’s one t
by Ineye Komonibo
TV Shows
The Cecil Hotel Is Haunted By Death & Conspiracies Theories, So O...
There’s something about an eerie hotel that’s even creepier than a haunted house. Maybe it’s the idea that a place created to prioritize
by Natalie Morin
Pop Culture
A Year After Their Sudden Death, Vanessa Bryant Remembers Kobe & ...
On January 26, 2020, Kobe Bryant and his daughter Gianna were killed in a helicopter crash along with seven other people in the hills of Calabasas. The tra
by Ineye Komonibo
TV Shows
The Bachelor Wasn’t Ready To Tackle Sex Work
The Bachelor 2021 has a fundamental mile-wide mean streak. You can see it in the “mob mentality,” to quote Katie Thurston in “Week 4,” that ultimat
by Ariana Romero
Music
The Evolution Of Monsta X
Five years ago, the K-pop group led with in-your-face intensity. Now, the industry veterans have evolved into a more at ease Monsta X.
by Natalie Morin
Reality TV
The Bling Empire Cast Is Doing The Most In 2021
by Lia Beck
The Bachelor
The Bachelor Season 25, Episode 4 Recap: Why You Gotta Be ...
It’s time for the twist we’ve been waiting for since the start of Matt’s Bachelor season: The arrival of Ben Higgins. Oh wait. No, not that. The arri
by Lia Beck
The Bachelor
Victoria’s Luck May Finally Be Running Out On The Bachel...
Every season, one of the Bachelor contestants becomes a “villain” early on. She’s usually not very self aware, stirs up drama with the ot
by Martha Sorren
The Bachelor
Who’s Left On The Bachelor With Matt James… Th...
by Martha Sorren
TV Shows
Here’s Every Bachelor Nation Couple That’s Sti...
by Martha Sorren
Discover
R29 Stories & News
Watch
R29 Original Series & Films
Shop
R29's Most Wanted