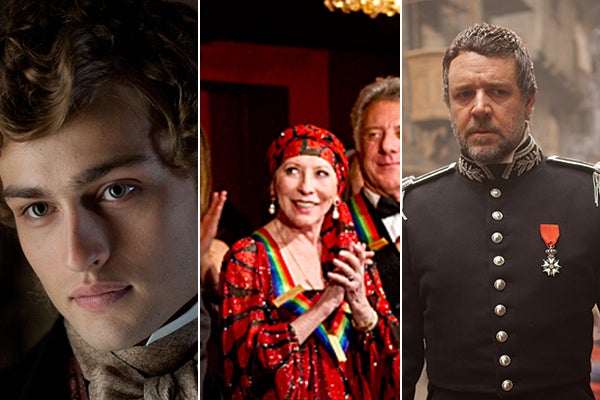 Hump: Technically, Masterpiece Classic’s most recent adaptation of Charles Dickens’ classic bildungsroman*, Great Expectations, first aired in April, but who has time to watch a four-hour historical miniseries that doesn’t have Downton or Abbey in the title? What’s important here is that PBS wisely re-aired it on Christmas, which meant my mom and I had time to hold our inaugural meeting of the Douglas Booth Appreciation Society (and just mere hours after the Eddie Redmayne Fan Club held court at a New Jersey movie theater).
Seriously, look at him. What do you think it’s like to walk around with that face? Was Pip supposed to be that startlingly handsome? He was like a hundred times more attractive than the actress who played Estella, and I’m pretty sure Dickens wanted the heartbreaking Havisham protégé to be the best looking one of the lot. Nope, not in this version. It was Douglas Booth’s face’s movie, and everyone else was just living in it.
Advertisement
If you want more Booth action, he plays the guy who deflowers Miley Cyrus in LOL, which yeah, I watched just for him.** He was in the Emma Watson’s Burberry campaign, and he’ll play Romeo opposite Hailee Steinfeld in the upcoming adaptation of Romeo and Juliet. Or you can always just Google image him and try not to cut yourself on those cheekbones.

*What up, 10th-grade English?
**These are my confessions.

Marry: In yet another sign that I’m getting old, I was very excited to catch the annual Kennedy Center Honors Wednesday night on CBS — next thing you know, I’ll be DVR’ing 60 Minutes. Seriously, though, they were pretty badass this year. I spent the past hour in a total Wikipedia k-hole that started with Led Zeppelin and ended with the phrase “inscribed in dead wax by the run-out groove.” So, if anyone wants to discuss The Yardbirds or thrash metal, I will be very knowledgable about them for the next half hour or so.
Besides Robert Plant crying while watching Heart and a gospel choir cover “Stairway to Heaven” (and I give the guitarist major props for performing one of the most famous guitar solos of all time in front of the legend who recorded it), the most badass person of the night had to be Natalia Makarova, the ballerina who defected from the Soviet Union — leaving behind her family, the Vaganova school, and the Kirov Ballet — to share her talent with the world. She sat there in her matching dress and headscarf and didn’t bat an eyelash when lesser mortals like Jimmy Kimmel tried to make jokes at her expense.
Advertisement
(Cut to half an hour later.)
Just fell into a vast YouTube spiral of Makarova videos. She is pure magic.
Kill: Since it was kind of a slow week for TV — not that I don’t enjoy 24 full hours of A Christmas Story and the Yule log — I need to break out of the box (lame pun intended) for this one. Along with the rest of the world, my family and I saw Les Mis on Christmas. I was beyond excited for it, as I’m sure you’ve gathered given my membership in the Eddie Redmayne Appreciation Club. For the most part, I enjoyed it — a little long, though. Pee first.
What I just don’t understand is which genius casting directors convinced Tom Hooper that they’d try to reel in Russell Crowe’s ever-diminishing Gladiator fanbase by casting the vocally challenged actor as Javert. He looks the part, but his eligibility for the role ends there. Congratulations on the 50 or so action fans you managed to inveigle into seeing a movie-musical, guys. I hope their ticket, popcorn, and soda money made up for the auditory torture the rest of us had to endure listening to Maximus warble his way through “Stars.” I was not entertained.

Somos Libres
Black Women Carry Reggaetón’s Foundation; Let’s Ensure They Reign...
“Our music, regardless that we have more feminine presence, is still ruled by the guys,” Ivy Queen, beloved Puerto Rican reggaetón pioneer and host of
by Ecleen Luzmila Ca...
Entertainment
María Isabel Finds Her Strength in Soft Bilingual R&B
María Isabel has mastered the art of songwriting. You can hear it in her sophomore EP, i hope you’re very unhappy without me. Through the eight-track pr
by Brenda Barrientos
Unbothered
Actually, Netflix, Content Like Dave Chappelle’s Transphobic Come...
If you are extremely online, you know the internet has been dominated by take after take — some thoughtful, some ignorant — on Dave Chappelle’s recen
by Kathleen Newman-B...
Advertisement
Unbothered
Well-Read Black Girl & R29Unbothered Present The Black Love Readi...
by R29 Unbothered
Unbothered
Netflix Wants You To Join Its Book Club & Is Throwing In Uzo Adub...
From Bridgerton to A Series of Unfortunate Events to Shadow and Bone, many of Netflix’s exciting original offerings are adaptations of equally popular li
by Ineye Komonibo
Unbothered
Why Are We Fighting Over The Next Bond? Lashana Lynch Is Right There
This story includes spoilers from No Time to Die. After being delayed for more than a year due to the ongoing coronavirus pandemic, No Time to Die has fina
by Ineye Komonibo
Unbothered
Phoebe Robinson’s Tiny Reparations In The Publishing Industry
It’s almost absurd to think that Phoebe Robinson — a successful comedian, author and actress of 2 Dope Queens fame would have difficulty selling her fi
by Stephanie Long
Dedicated Feature
Insecure‘s Yvonne Orji On Why Her Onscreen Charact...
Insecure, the award-winning, critically acclaimed, insanely relatable HBO series, is all about what it means to be a Black woman in America. But at its cor
by Taiia Smart Young
Unbothered
Years After Her Death, The Science Community Is Still Treating He...
In the 1950s, a Black woman named Henrietta Lacks walked into Johns Hopkins Hospital to be treated for cervical cancer, and her cells would go on to b
by Ineye Komonibo
Unbothered
We’re Raising A Fist For The Radical Hood Library, Noname’s Lates...
Last week, Noname opened the Radical Hood Library, a Black-led, Los Angeles-based literary liberation project that was created to service Black and brown p
by Stephanie Long
Unbothered
What Lil Nas X’s ‘Montero’ Means To The Young, Black & Queer: A C...
In May 2019, I went home to Columbus, Ohio to visit my mother. It was her 60th birthday, but I didn’t just come home to celebrate her. I was also there t
by Amber J. Phillips
Unbothered
Black Love In The Bachelor Franchise? Groundbreaking (No, ...
What might have been the most chaotic season of Bachelor in Paradise has finally come to an end, and although the process was more tumultuous than it neede
by Ineye Komonibo
Advertisement
Advertisement
Discover
R29 Stories & News
Watch
R29 Original Series & Films
Shop
R29's Most Wanted