Skip navigation!
Story from Politics
The doll hair trend is by now a mainstay in Japanese fashion, with some crediting J-Pop star Kato Miliyah with the mainstream-ification of the trend in Asia, but is this "doll look," which includes the meticulously coiffed curls, as well as heavy eye make-up, porcelain skin, and schoolgirl-style dress, finally making waves here in the states? The Daily Mail picked out Caucasian blogger Kota Koti ("real" name: Dakota Rose) who's been gaining a following in Japan, and whose larger-than-life features (and penchant for Photoshop) have won her plenty of admirers and haters (Kota Koti's site seems to be currently down, but you can find her newly launched Tumblr here — warning: upsetting language). [EDIT: The Tumblr is apparently a fake. The link has been removed.]
Advertisement
Nevermind the upkeep required to have doll hair and makeup, but is this trend something more sinister? Though there are plenty of people who warn that this trend contributes to the sexualization of children, The Daily Mail reports that many in Asia see this trend as a glorification of femininity and a rejection of sexuality. Troubling either way, right? Quite frankly, we find the whole doll look disturbing, in an uncanny valley sort of way — plus, we find the lack of imperfections and idiosyncrasies just so boring. What say you? Kawaii-cute or just plain creepy? 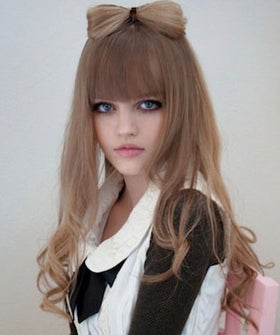 High Impact
“I Never Wanted To Be The First” — Weed Pioneer Vivianne Wilson O...
How does the first Black woman to run a cannabis company in Canada reconcile the success of her business with the industry's systemic racism?
by Gloria Alamrew
News
Everything To Know About The Derek Chauvin Trial
Ten months after he killed George Floyd by holding a knee to Floyd’s neck for eight minutes and 46 seconds, former Minneapolis police officer Derek C
by Lydia Wang
News
Are Police Supporting Right Wing Conspiracy Groups? The Oath Keep...
On January 6, Jess Watkins, an alleged member of the anti-government militia movement the Oath Keepers and a former Army ranger, can be heard from the Capi
by Danielle Campoamor
Advertisement
News
A Huge Number Of Texans Want “Aggressively Centric” A...
When it comes to planning the next phase of their careers, some celebrities start wellness companies, some start recording podcasts, and some decide to bec
by Asia Ewart
News
What We Know About The Indianapolis FedEx Factory Shooting
On Thursday night, a 19-year-old gunman named Brandon Scott Hole opened fire at a FedEx Ground facility near Indianapolis, killing eight people and wound
by Danielle Campoamor
Unbothered
Black and Asian Solidarity Has A Long History — Here Are The Wome...
As the fight to abolish white supremacy rages on, we’re honoring some of the Black and Asian women living and fighting for social justice at the intersec
by Niki McGloster
News
A Cop Who Killed Breonna Taylor Wrote A Book — But Why Is It Gett...
Publishing giant Simon & Schuster is facing criticism and outrage after it was reported that one of the company’s distribution clients is publishing
by Lydia Wang
News
What We’ve Learned From The Bodycam Footage Of Adam Toledo&...
On Thursday, Chicago officials released bodycam footage of the fatal March 29 shooting of 13-year-old Adam Toledo. The graphic video (which Refinery29 is n
by Danielle Campoamor
News
Kyle Rittenhouse Killed Two Protestors — & Police Have Donated Th...
Kyle Rittenhouse, an 18-year-old who killed two people and injured a third in Kenosha, Wisconsin last summer, has since raised at least $586,940 through th
by Lydia Wang
News
Watch Maxine Waters Tell Jim Jordan To “Shut Your Mouth,...
On Thursday, Rep. Maxine Waters got to do something many of us can only dream of doing: she told Rep. Jim Jordan to shut his mouth. During a subcommittee m
by Lydia Wang
News
Of Course QAnon Has A Conspiracy Theory About Ivanka Trump’...
For months, Ivanka Trump has stayed pretty quiet online. Maybe she’s about to attempt a rebrand, or maybe she’s trying to lay low after calling the Jan
by Lydia Wang
News
Why Would AOC Ever Bother Debating Marjorie Taylor Greene?
These days, Rep. Marjorie Taylor Greene has been pretty busy getting suspended from Twitter and pushing to award officers who “fight back against Bla
by Lydia Wang
Advertisement
Advertisement
Discover
R29 Stories & News
Watch
R29 Original Series & Films
Shop
R29's Most Wanted