Skip navigation!
Story from Home
Of course Chloë Sevigny lives in an East Village garden co-op decorated to the nines by a little-known Bowery interior decorator. But other surprises abounded as NY Mag toured her apartment (one of several she's had since becoming a New Yorker). Some such surprises were her feel for nautical accents, crosses reminiscent of her Catholic upbringing, and a preppy-yet-sophisticated bathroom courtesy of Kelly Wearstler. It's a mix of aesthetics that (because they're so polished, and because they all seemingly fit with Chlo's eclectic style) work. Also touching? The story of her ex-boyfriend moving out and taking with him all the photos of the couple, leaving only one framed postcard of Jesus. Ah, the hipster breakup. Of course he did: "It's kind of weird, right? But it's beautiful," she remarks, and it all is. Click through for more pics of Chloë Sevigny's pad. (NY Mag) 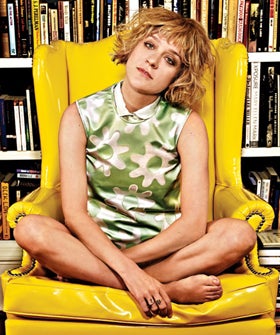 Home
Go Forth & Score One Of The 22 Best Early Presidents’ Day M...
by Amanda Randone
Most Wanted
Gallery-Worthy Puzzles Designed By Women Artists, Right This Way
While the pandemic-mandated quarantine lifestyle is behind us, there are some holdover habits that have made a permanent comeback in our lives — specific
by Karina Hoshikawa
Amazon
This Week’s Best Amazon Home Goods Deals
by Alexandra Polk
Advertisement
Home
The Best Affordable Loveseats — According To Small-Space Dwellers
by Elizabeth Buxton
Unbothered
Inside The Home Of The “Princess of Harlem” & How She’s Continuin...
If you ask around Harlem — the true heart of Harlem — most people will immediately know the “Princess of Harlem.” It’s a nickname affectionately
by Sarah Michel
Most Wanted
Found: The 28 Best Home Office Chairs To WFH In
by Elizabeth Buxton
Most Wanted
These Valentine’s Day Flowers Will Last Longer Than Some Re...
There are two things we know to be very true when it comes to fresh-cut flowers: One is that they can be very expensive (we can help with that), and two is
by Karina Hoshikawa
Deals
Take Up To 20% Off The Living Room Furniture Of Your Dreams
Rob Forbes — furniture aficionado and founder of luxury home goods retailer Design Within Reach — disliked gatekeeping before TikTok made it
by Alexandra Polk
Home Organization
These Shoe Organizers Aren’t Just For Kicks (They’re ...
by Alexandra Polk
Amazon
12 Best Presidents’ Day Home Sales You Can Shop Now
by Alexandra Polk
Home
This Anti-Acne Pillowcase Actually Helped My Skin
Changing my pillowcase every five days, well, changed my life. *Cue dramatic music.* How could such a simple act make such a big difference? I first realiz
by Alexandra Polk
Most Wanted
I’m Not Going to Lie: I’m in Love With This Apt2B Sofa
When I moved into my first solo apartment, I suddenly found myself with a problem that’s hardly unique to my situation: I had a lot of furniture to buy a
by Samantha Baker
Advertisement
Advertisement
Discover
R29 Stories & News
Watch
R29 Original Series & Films
Shop
R29's Most Wanted