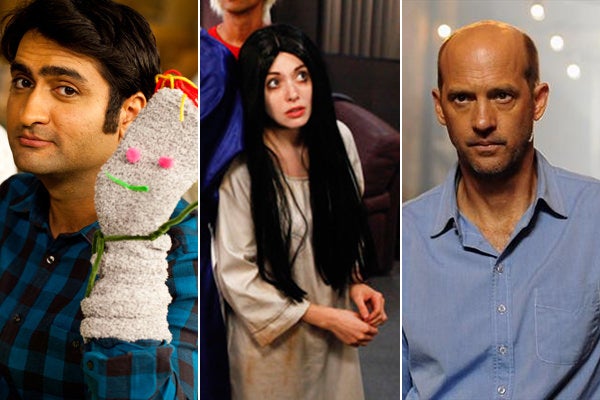 Hump: If you ever want to see the cast of my dream dinner party, look no further than Yahoo’s web series,
Burning Love. The amazing parody of The Bachelor and The Bachelorette is now in its second season, and E! will actually be airing the first season, which starred Ken Marino as a firefighter looking for love, on TV starting February 25. You should definitely watch.

The second season fittingly launched on Valentine’s Day, and it features Julie Gristlewhite (June Diane Raphael), one of the rejected suitors from season one, as the bachelorette looking for Mr. Right — and battling some personal demons along the way. The bachelors assembled are pretty much my all-star dream team of comedians and actors. Just to name a few: Adam Scott, Rob Huebel, Adam Brody (“The Jewish One”), Michael Cera, Ryan Hansen, Michael Ian Black (as host Bill Tundle), Nick Kroll, Nick Thune, Martin Starr, Paul Scheer, and Colin Hanks (who plays Allison, an exact clone of The Bachelorette’s entitled helicoptered-in tool, Kalon). I already have dreams starring all of these dudes, so seeing them assembled in one place making fun of one of the most easily mockable pieces of trash our culture has produced to date is complete nirvana.
Advertisement
Just like its source material, Julie meets her potential husbands at the first cocktail party, and right before the box ceremony (on Burning Love, “Will you accept this rose?” becomes “Will you hold my box?”), the host announces that she first has to meet four bonus gentlemen. Enter four non-white bachelors who barely get to say one word to Julie before it’s time for eliminations. “I didn’t even get to talk to her,” one bonus bachelor protests. “Well, it’s not about how much time you get, it’s about the fact that you got equal opportunity,” Bill Tundle explains.
Not one to slap affirmative action in the face or even know why she’d be presented with four random additional dudes, Julie does, in fact, pick one of the bonus gentlemen to make it to the next round: Zakir (Kumail Nanjiani), who she immediately renames Zak. So, just when I thought the cast couldn’t get any better, they throw Kumail onto the field. Someone please fetch my smelling salts.
Marry: Community aired its Halloween episode on Valentine’s Day because NBC sucks and held the season premiere (that was supposed to debut on October 19, making this second episode perfectly timed for, you know, the actual date of Halloween) until February. The season’s gotten off to a somewhat off-kilter start (even more than usual for the already bizarro show) without creator Dan Harmon, but the Halloween episode gave some of the actors a chance to go even more over-the-top since they were in crazy costumes.
Advertisement
Annie (Alison Brie) played the fool even better (and more meta) than usual in this episode. She was supposed to do a couples costume with Jeff, but he texted her to come as a “ring girl” (to his studly shirtless boxer), which she misunderstood, and showed up as “the girl from The Ring.” She even entered in the same creepy-crawly way that gave me nightmares for a week after watching The Ring despite hating referential humor (we see what you’re doing there, Community). Spot on scary-fun stuff, minus the fact that it’s February.
Kill: On Thursday, I tuned into the premiere of ABC’s new conspiracy theory show, Zero Hour, because hello, it stars Cappie from Greek (best ABC Family show, ever). But, oh my god, this show...I can’t. First of all, Anthony Edwards is the main character, and I had to IMDb him to confirm that he was a name and that ABC didn’t just hang an entire show on possibly the most unemotive actor of all time. (Then again, is “Starring Anthony Edwards from ER” really enough to get people to tune in?)
Then, there’s the entire premise. The show starts in Nazi Germany, where soldiers murder two priests because of some reason having to do with the whole “Zero Hour” premise. Then, flash forward to present day: Edwards plays the editor-in-chief of a print magazine called Modern Skeptic that the show’s creators expect us to believe is a thing that exists in the age of Snopes.com, The Smoking Gun, and the whole entire Internet. His wife owns a massive “timepiece repair shop” in Brooklyn, because tons of people these days are concerned about timepiece maintenance. I know I’m forever like, “Damn, my grandfather clock just isn’t chiming as loudly as it used to, better take it into the clock shop, and, oh wait, what’s that? I have time-telling abilities on this little handheld electronic device I own that also allows me to send emails, make phone calls, and play Scrabble?”
Advertisement
Anyway, the profitable magazine editor (good one) and the clock-repairer (better one) live in a gorgeous brownstone in Brooklyn (sure, why not?) and do things like meet up to stroll through flea markets in Brooklyn Bridge Park on their lunch breaks because they are so in love. In the pilot, however, Edwards goes back to work, his wife buys an intriguing, old clock at the fair, and then the guy who played Mikael Blomkvist in the Swedish version of The Girl With the Dragon Tattoo kidnaps her because of some age-old, Da Vinci Code-style legend that somehow involves the Church, Nazis, diamonds with treasure maps etched in them, and racing through the Arctic Circle in a Jeep.
The setup is confusing, and maybe I’m just getting too old and jaded to suspend disbelief, but come on, a lifelong conspiracy theorist didn’t know about this massive cross-continent, millennium-old Zero Hour a.k.a. armageddon thing? His magazine (still can’t get over that one) never covered it during what I assume can only be a long and successful history of writing stories exactly like this one? And this guy whose wife just got kidnapped and his best friend got murdered as a result can only stand there with his mouth slightly agape copping a half-assed ‘tude when the FBI questions him? Also: The FBI lets you bring journalists into meetings if they’re there for moral support instead of, oh, writing the entire magazine that’s on deadline? No. All of it, just no.

Entertainment
The Fallout Isn’t Just About Another School Shooting
Spoilers ahead. The Fallout only needs five minutes to completely break you. In the last heart-wrenching moments of the movie, out on HBO Max on January 27
by Katherine Singh
Unbothered
Love & Hip Hop Gets Rooted In A New Special About African ...
Since its series premiere in 2011, VH1 original reality series Love and Hip Hop has taken music fans all over the country, making stops in New York City, M
by Ineye Komonibo
Unbothered
Millennials, Have We Aged Out Of The High School Genre?
Five years after the series finale of Degrassi: Next Class — the fifth iteration of the popular Canadian teen franchise — HBO Max announced that it wou
by Ineye Komonibo
Advertisement
Entertainment
She Created Her Own Korean Disney Princess Musical & This Needs T...
When most people think of an Asian Disney princess, there’s often one go-to: Mulan aka the Chinese heroine who doesn’t need saving but instead save
by Katherine Singh
Entertainment
How Scammers Became Accidental Antiheroes Of The Girlboss Era
Con artists are nothing new. But our collective interest in them has been piqued in recent years as a number of high-profile scandals have redefined the wa
by Alice Porter
Dedicated Feature
Single Drunk Female — A Must-See Comedy About Sobriety —...
Margarita Mondays. Wine Wednesdays. Happy hours. “Book club.” In a world in which drinking culture is the norm, with holidays (St. Patrick’s Day, New
by Andrea Cheng
Unbothered
In Defense Of Ari Lennox’s Trip to Ghana: The Power and Pro...
Grammy-nominated musician Ari Lennox recently performed at Ghana’s Afrochella music festival and shared her experience in the West African nation on Twit
by Qali Id
Somos Latinx
How Afrobeats Is Musically Bridging Black Latinxs and Africans
The first time I heard Colombian pop singer Maluma’s “Mama Tetema,” featuring Tanzanian singer-songwriter Rayvanny, I was writing a script for VEVO?
by Marjua Estevez
Unbothered
Netflix Has A Hit On Its Hands With The New Cast Of Too Hot To...
Spoilers for Netflix’s Too Hot to Handle ahead. Too Hot to Handle came to us at the beginning of the coronavirus pandemic. It was gloriously-timed conten
by Ineye Komonibo
Unbothered
And Just Like That… Sex and the City Still Doesn’t D...
Sex and the City is such a pop-culture juggernaut that many Black women can make some reference to it, whether it be a love of the Cosmopolitan, a salute t
by Niki McGloster
Unbothered
Still Missing Insecure? These New Black Shows Will Make It...
by Ineye Komonibo
Unbothered
It’s Time For Black TikTok Creators To Be Paid Their Worth
Forbes recently named TikTok’s top-earning creators, including Charlie and Dixie D’Amelio and Addison Rae.
by Venesa Coger
Advertisement
Advertisement
Discover
R29 Stories & News
Watch
R29 Original Series & Films
Shop
R29's Most Wanted