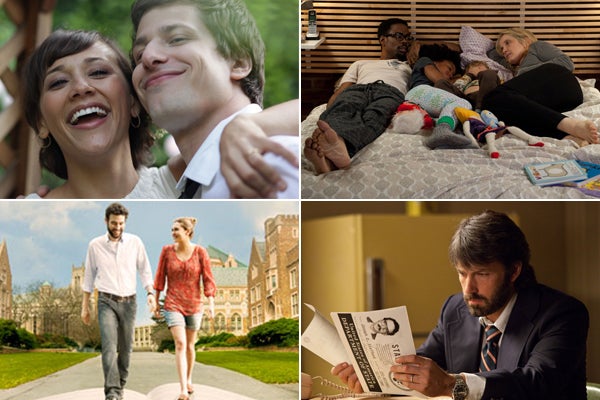 We've seen Madonna try her hand at directing, Jodie Foster writing and directing...beaver puppets, and does anyone else remember Danny DeVito's Death to Smoochy? Yeah, we're trying to forget, too.
Unfortunately, a lot of the films written and directed by actors are a huge miss. Props to them for trying, but more often than we'd like to admit, we find ourselves wishing they would just stick to what they're good at so we could have saved on that $13.25 ticket price.
However, a slew of new releases featuring actor- and actress-penned screenplays actually look really good. We found four films we just can't wait to see, dreamed up by familiar on-camera notables who prove that they're way more than just a pretty face (and of course, a talented thespian).
Advertisement

Rashida Jones is showing us some serious screenwriting chops. Answering the age-old question, "Can you really be friends with your ex?", Celeste and Jesse Forever takes a look into what happens after an out-of-the-blue divorce. Hint: Just make sure you're the one to move on first.

Liberal Arts
Haaaave you met Ted? Okay, more like Josh Radnor, who's known for playing Ted Mosby on How I Met Your Mother. But did you know that he writes and directs films too? His second film (yes, second — his first was Happythankyoumoreplease, in 2010) Liberal Arts presents the unfortunate truth of what happens after you graduate with a degree in Liberal Arts — nothing. Except for maybe falling for a much younger gal and dealing with some existential drama. For the record, if we had written this movie, we'd have cast Elizabeth Olsen as our love interest, too.

Okay, so this one is probably the most obvious pick on our list. We must say Mr. Affleck has really upped his game — we honestly never thought we'd hear about him again after Gigli (cringe) — but the man knows how to rebound. And he also knows how to direct. With Gone Baby Gone and The Town under his belt (don't say you didn't like those flicks, we know you did), Affleck has gone and made his third baby and no, we're not talking about his son Samuel. Argo is based on a true story of American hostages taken by militants during the 1979 Iranian revolution, but there's enough humor and sentiment thrown in to give your nerves a break, too.

Another film vet has come out of the woodwork with her fifth directed feature. Remember how you felt watching 2 Days in Paris? Julie Delpy has conjured a follow-up, this time staring Chris Rock — yes, you read that correctly — with 2 Days in New York. We have to admit, when we heard Chris Rock would be playing Julie's love interest, we couldn't quite see how this would work. But now, we totally get it.

Entertainment
The Fallout Isn’t Just About Another School Shooting
The Fallout only needs five minutes to completely break you. In the last heart-wrenching moments of the movie, out on HBO Max on January 27, Vada, played w
by Katherine Singh
Unbothered
Love & Hip Hop Gets Rooted In A New Special About African ...
Since its series premiere in 2011, VH1 original reality series Love and Hip Hop has taken music fans all over the country, making stops in New York City, M
by Ineye Komonibo
Unbothered
Millennials, Have We Aged Out Of The High School Genre?
Five years after the series finale of Degrassi: Next Class — the fifth iteration of the popular Canadian teen franchise — HBO Max announced that it wou
by Ineye Komonibo
Advertisement
Entertainment
She Created Her Own Korean Disney Princess Musical & This Needs T...
When most people think of an Asian Disney princess, there’s often one go-to: Mulan aka the Chinese heroine who doesn’t need saving but instead save
by Katherine Singh
Entertainment
How Scammers Became Accidental Antiheroes Of The Girlboss Era
Con artists are nothing new. But our collective interest in them has been piqued in recent years as a number of high-profile scandals have redefined the wa
by Alice Porter
Dedicated Feature
Single Drunk Female — A Must-See Comedy About Sobriety —...
Margarita Mondays. Wine Wednesdays. Happy hours. “Book club.” In a world in which drinking culture is the norm, with holidays (St. Patrick’s Day, New
by Andrea Cheng
Unbothered
In Defense Of Ari Lennox’s Trip to Ghana: The Power and Pro...
Grammy-nominated musician Ari Lennox recently performed at Ghana’s Afrochella music festival and shared her experience in the West African nation on Twit
by Qali Id
Somos Latinx
How Afrobeats Is Musically Bridging Black Latinxs and Africans
The first time I heard Colombian pop singer Maluma’s “Mama Tetema,” featuring Tanzanian singer-songwriter Rayvanny, I was writing a script for VEVO?
by Marjua Estevez
Unbothered
Netflix Has A Hit On Its Hands With The New Cast Of Too Hot To...
Spoilers for Netflix’s Too Hot to Handle ahead. Too Hot to Handle came to us at the beginning of the coronavirus pandemic. It was gloriously-timed conten
by Ineye Komonibo
Unbothered
And Just Like That… Sex and the City Still Doesn’t D...
Sex and the City is such a pop-culture juggernaut that many Black women can make some reference to it, whether it be a love of the Cosmopolitan, a salute t
by Niki McGloster
Unbothered
Still Missing Insecure? These New Black Shows Will Make It...
by Ineye Komonibo
Unbothered
It’s Time For Black TikTok Creators To Be Paid Their Worth
Forbes recently named TikTok’s top-earning creators, including Charlie and Dixie D’Amelio and Addison Rae.
by Venesa Coger
Advertisement
Advertisement
Discover
R29 Stories & News
Watch
R29 Original Series & Films
Shop
R29's Most Wanted