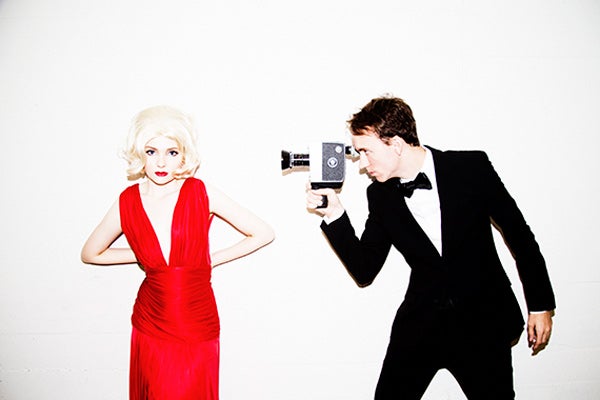 They grow up so fast! One moment they're dancing their hearts out in a sweatband and kneepads, and the next they're posing in plunging necklines and Monroe-esque wigs for Tyler Shields.
Since her days as Little Miss Sunshine, Abigail Breslin has totally transformed into one to watch — she's earned herself many a best-dressed title, and has landed major roles alongside the likes of Halle Berry and SJP, all before most teens get their permits. But, don't think that the blockbuster babe, who is now 16, has ditched her indie roots altogether. Even though she's got four flicks lined up for 2013, she took time from her busy schedule to star in Shields' debut film, Final Girl.
Advertisement
The notoriously provocative shutterbug (you may recall he burned a Birkin back in the day), has cast Breslin alongside a slew of young guns, including his GF Francesca Eastwood. The most recent promo features an unrecognizable Breslin in gobs of mascara, a ruby-red pout, and a platinum-blonde wig. Of her acting chops, Shields said, "I don't even have the words to describe her; she blew me away on set yesterday," adding, "she is unlike anyone has ever seen her before. You will see the dangerous and the beautiful side of Abigail Breslin."

Well, here's hoping the starlet can live up to the hype, and that she doesn't set any pricey purses on fire in the process!
(Huff Post Celeb)

Celebrity Beauty
Chrissy Teigen Breaks Down Every Product In Her $824 Skin-Care Ro...
There’s no saying what Chrissy Teigen will post next, especially when social distancing measures are keeping most people close to home. From funny tw
by Thatiana Diaz
Celebrity Beauty
Ariel Winter Is Unrecognizable With Her New Icy-White Hair
Modern Family alum Ariel Winter just became the latest celebrity to hop on the summer’s quarantine bleaching trend. Joining the likes of Kaia Gerber,
by Megan Decker
Celebrity Beauty
Why Margot Robbie Is The Ultimate Summer Beauty Muse
by Megan Decker
Beauty
Teyana Taylor’s MAC Collaboration Is A Testament To Her Dop...
A teenage Teyana Taylor would tell you that walking past the MAC store on 125th Street in Harlem and envisioning herself on a campaign billboard was simply
by aimee simeon
Beauty
Kanye Says Kim Kardashian West Is Officially A Billionaire After ...
Following in the footsteps of younger sister Kylie Jenner, Kim Kardashian West has just sold a 20% stake in her cosmetics line to Coty. The $200 million do
by Refinery29
Beauty
Kim Kardashian Just Dyed Her Hair Red — & She Looks So Different
While every other celeb seems to be going bleach blonde in quarantine, Kim Kardashian West is switching course and embracing a totally unexpected shade: fi
by Megan Decker
Celebrity Beauty
Megan Thee Stallion’s Desert-Glam Hairstyle Stole The BET A...
At last night’s BET Awards, Megan The Stallion was crowned Best Female Hip Hop Artist of the Year. Though it was an entirely virtual award show — w
by Megan Decker
Beauty
Beyoncé’s BET Awards Glam Was Worthy Of Its Own Prize
Last night’s 2020 BET Awards were unique for many reasons — not least because the event was entirely virtual for the first time ever due to COVID-1
by aimee simeon
Beauty
Fans Are Trying To Guess The Meaning Of Jennifer Aniston’s ...
We’ve been so busy paying attention to Jennifer Aniston’s iconic hair over the years, we didn’t even notice that the star has been flying under t
by aimee simeon
Celebrity Beauty
Kaia Gerber Just Went Platinum Blonde For Summer
While we’ve been sitting out in the sun with our roots doused in lemon juice, Kaia Gerber has also been gradually lightening her hair over the past f
by Megan Decker
Beauty
Salma Hayek’s New Sun-Kissed Highlights Are Summer Hair Goals
If you have jet-black hair, adding highlights can sound extreme. But this summer, forget the peroxide-blonde connotation, and consider lifting your dark st
by Megan Decker
Celebrity Beauty
Cardi B Got 3 Piercings In One Night — & Recorded The Entire Process
Celebrities debut new piercings so often, you almost start to wonder if they even experience pain like the rest of us. With no inside look at the process,
by Thatiana Diaz
Discover
R29 Stories & News
Watch
R29 Original Series & Films
Shop
R29's Most Wanted