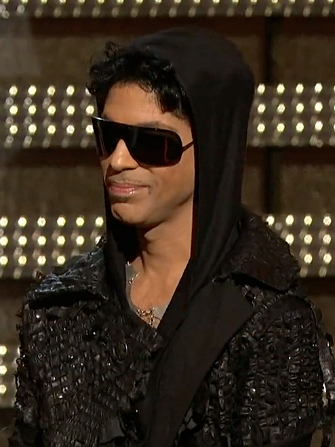 Music fans may remember that Prince and his label, Warner Bros. Records, didn't exactly get along.
But, 21 years after protesting his contract situation by scrawling "slave" on his face — one of the '90s most arresting pop visuals — the iconic singer appears to be burying the hatchet with the label.

"A brand-new studio album is on the way," Prince said in a statement. "Both Warner Bros. Records and Eye are quite pleased with the results of the negotiations and look forward to a fruitful working relationship." Purple hell has frozen over, people.
Not only will we see new Prince material in the near future — a new single, "The Breakdown," launched on iTunes this morning, in fact — but special releases are also on the docket. According to Rolling Stone, Warner Bros. will release both unheard rarities and a remastered, deluxe edition of 1984's Purple Rain soundtrack in honor of its 30th anniversary.
Prince reportedly now also has "ownership and control" over his master recordings. This probably was the game changer for Prince, who once explained his discontent with his label as a master/servant scenario. "When you stop a man from dreaming, he becomes a slave." he said in 1996. "That's where I was. I don't own Prince's music. If you don't own your masters, your master owns you." Now Prince is master and commander of his own empire once more — or, in another buzzy words, he's the captain now. (Rolling Stone)
Music
All The Evidence 1989 Is Taylor Swift’s Next Drop
Taylor Swift fans are famous for their detective skills, and have proved time and time again that they can crack almost any code the Easter egg-loving sing
by Natalie Morin
Music
The BEST Dance Songs Of All Time
by R29 Editors
Music
RALPH Has A Thing For A Boy Named “Tommy”
Welcome to The Drop, Refinery29’s home for music video premieres. We want to shine the spotlight on women artists whose music inspires, excites,
by Ineye Komonibo
Advertisement
More In Music
New Music To Know: Dove Cameron Doesn’t Want Your Lazy Love
As if Fridays weren’t your favorite day already, Refinery29 will also be gathering the best new music out each week, and breaking down why each track des
by Ineye Komonibo
Music
Every Song On Amazon Prime’s Them Soundtrack
by Natalie Morin
Music
Hip Hop Icon DMX Has Died At Age 50
Hip hop titan DMX ((real name Earl Simmons) has died at the age of 50 years old. Simmons’ family shared the tragic news of his passing in a
by Ineye Komonibo
Entertainment
Taylor Swift Gave An Old Song New Meaning On Fearless (Taylor...
What many fans love about the first of Taylor Swift’s rerecorded albums, Fearless (Taylor’s Version), is the way it stays so faithful to the origi
by Natalie Morin
Music
Taylor Swift Is Bringing An Ex Out Of The Vault In A Brand New Song
Just because Taylor Swift is a mature 31-year-old who writes about fictional towns and World War II doesn’t mean she can’t let the Old Taylor p
by Natalie Morin
Music
Olivia Rodrigo Expands Her Heartbreak Universe With “Deja V...
Olivia Rodrigo, now armed with her shiny new “drivers license,” hits the road again in the music video for her second single, “deja vu.&#
by Natalie Morin
Music
Demi Lovato Relives The Trauma Of Her Overdose For New Music Video
Demi Lovato’s stunning new music documentary Dancing with the Devil takes fans into the intense series of events that led to her 2018 drug overdose.
by Ineye Komonibo
Music
I Have Questions About…People Hating On Lil Nas X’s Hell-Ra...
Growing up, the church told Lil Nas X that being gay would send him straight to Hell — so the singer figured, why not zip up his thigh-high stilettos and
by Natalie Morin
Music
New Music To Know: Demi Lovato Bares It All & Princess Nokia Keep...
As if Fridays weren’t your favorite day already, Refinery29 will also be gathering the best new music out each week, and breaking down why each track des
by Ineye Komonibo
Advertisement
Advertisement
Discover
R29 Stories & News
Watch
R29 Original Series & Films
Shop
R29's Most Wanted