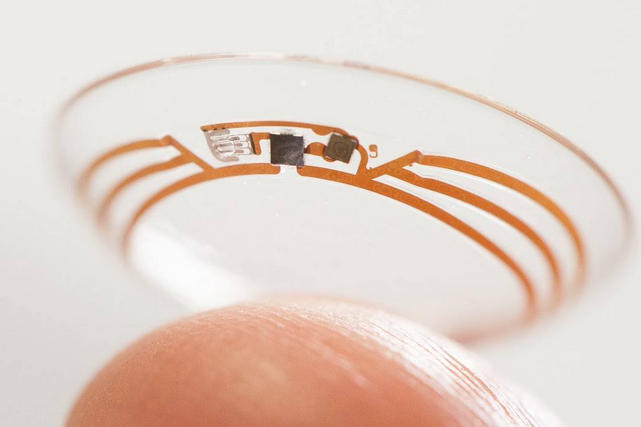 Photo: courtesy of Google.
In its ongoing quest for global domination, Google is entering the world of biomedical engineering. The tech giant just released the first images of a new, smart contact lens that will help diabetics measure their glucose levels.
Instead of pricking their fingers to draw blood, wearers would rely on a small wireless chip embedded in the lens to measure glucose levels in their tears. If levels got too high, an LED light would flash as a warning. Google added that it's working diligently with the FDA to bring the product to market, but that it won't be available for another five years. Once it is, though, its impact will be seismic. Around 380 million people suffer from diabetes worldwide, and that number's expect to increase to 590 million by 2035, according to the International Diabetes Federation.
But, the implications of the device stretch far beyond the realm of health care. The product was developed by Google X, the company's ultra-secretive research division responsible for other potential game-changers like the self-driving car and upcoming Glass. And, the high-tech lenses are only the beginning for this kind of technology — ladies and gentlemen, our transition from human being to cyborg is in full swing. (The Independent)
Sustainability
Real People Share Their Favorite Reusable Water Bottle Brands
by Angela Tafoya
San Francisco
S.F.'s Best Cheap-Eats Spots (& What To Order)
by Lauren Sloss
Tech
8 Young Professionals Share Their Work Secrets
The tech industry is growing at a head-snapping pace, with a pool of talent that includes some of the world’s brightest innovators, movers, and shake
by Angela Tafoya
Hair
4 DIY Hairstyles That Take Unwashed Hair To The Next Level
In a dream world, we would all roll out of bed with perfectly imperfect hair. You know, like the stuff you see in rom-coms and on Kate Moss. But, let’s b
by Katie Nash
Work & Money
This Entire Company Got Totally Naked For April Fools’ Day ...
by Angela Tafoya
Books & Art
This Artist Endured 8 Hours Of Catcalling To Fight Sexual Harassment
by Natasha Young
San Francisco
What It’s REALLY Like To Be A San Francisco Barista
by Kelly Anne Bonner
San Francisco
Farm-To-Table Weed Exists — & It Comes In A Mason Jar
I get a text message alerting me that my marijuana delivery will be at my apartment in four minutes. “You can track your driver by clicking this link
by Matthew Latkiewicz
San Francisco
10 NSFW Moments From The World’s Biggest Leather Event
by Michele Bird
San Francisco
15 Chic Styles You’ll Want From Everlane Now
by Michele Bird
San Francisco
The 15 Most Beautiful Spots In San Francisco
by Michele Bird
Home
This San Francisco Home Has The Most Beautiful Travel Souvenirs
by Homepolish
Discover
R29 Stories & News
Watch
R29 Original Series & Films
Shop
R29's Most Wanted