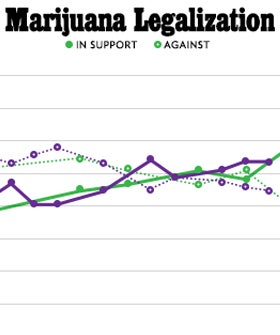 Photo: Via Daily Intelligencer.
Our fellow countrymen and women are more down with weed than gays on average, if only slightly. Daily Intelligencer plotted the data from a new Gallup poll that shows Americans' shifting attitudes toward marijuana legalization against data from a recent marriage equality poll. Support for marijuana legalization has jumped to an all-time high of 58 percent, according to the poll. Same-sex marriage support, meanwhile, was at a solid 53 percent in May of this year. While marijuana legalization apparently has more support than marriage equality, the two hot-button issues are on a similar trajectory toward acceptance. Democrats far outweigh Republicans in their support of both issues, but support is now stronger in both groups than ever before.

Of course, we realize that the two issues aren't really comparable, but even the folks at Gallup noted the correlation: "The movement to legalize marijuana mirrors the relatively recent success of the movement to legalize gay marriage, which voters have also approved now in 14 states. Public support for gay marriage, which Americans also overwhelmingly opposed in the past, has increased dramatically, reaching majority support in the last two years."
(Daily Intelligencer)

Health Trends
Do Period Cramp Relief Devices Actually Work?
An “off” button for menstrual cramps seems like something we’d be sold in a Netflix reimagining of The Jetsons, where a teenage Judy Jetson simply ta
by Marshall Bright
Unbothered
What Is A ‘Soft Black Girl Summer’? And Why I’m Vowin...
Follow the hashtag #SoftBlackGirl on Instagram and you will be inundated with tens of thousands of ethereal posts emulating something of a Bridgerton tea p
by Evie Muir
Unbothered
These Herbalists Are Helping Black Women Heal — One TikTok At A Time
According to the latest TikTok trends, herbalism is the new glow-up hack. For decades, herbalists have used plants for healing purposes and to study the im
by Celeste Polanco
Advertisement
Health Trends
33 Halloween Costumes For Badass Feminists
by Lux Alptraum
Wellness
These Mothers Are Fighting Coronavirus On The Frontlines — & It&#...
Each evening, the 7 p.m. cheers ring out in New York City. Some bang on their pots, some clap, while others hoot loudly. You would think this boisterous sc
by Sophie Hayssen
Marijuana & Culture
9 Weed Subscription Boxes To Celebrate 4/20 Today (And Whenever Y...
by Sarah Jacoby
Health News
Doctors Are Going Viral — & Getting Fired — For Discussing Corona...
People all over the world, including those on the frontlines, are using social media to share how they’re coping with the coronavirus crisis. We̵
by Araceli Cruz
Coronavirus
A 5-Minute Coronavirus Test Is Coming. Here’s What You Need...
In what seems like the first good news about coronavirus in a minute, Abbott Laboratories is getting ready to launch a test that can tell if someone is inf
by Tanya Edwards
Shopping Beauty
These Are 10 Top Beauty Products That People Are Actually Buying ...
If you’re reading this, then at some point or another, you’ve probably come across our monthly digest on all the hair, makeup, and skin ca
by Karina Hoshikawa
Health News
Dozens More Women Accuse Doctor Of Sexual Assault After Evelyn Ya...
A former Columbia University Ob/Gyn is facing accusations of sexual assault from nearly 40 new women, joining 32 others including Evelyn Yang, wife of form
by Alejandra Salazar
Health Trends
11 Amazing Black Women Athletes You Should Know About
by Cory Stieg
Wellness
How To Make Your New Year's Resolutions Stick
There should be a holiday that’s scheduled about a week after New Year’s Day, and is devoted to reevaluating all of the resolutions that you co
by Cory Stieg
Advertisement
Advertisement
Discover
R29 Stories & News
Watch
R29 Original Series & Films
Shop
R29's Most Wanted