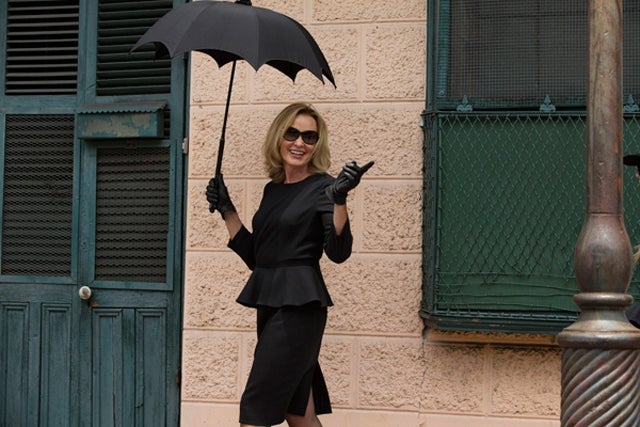 Photo: Courtesy of Michele K. Short/FX.
She's played the murderous mother of a spree killer, an unchaste nun haunted by her past, and lately, a witch with aging issues. After one more season on American Horror Story, however, Jessica Lange will call it quits. "I am coming to the end of acting," she told the Los Angeles Times. "I have a list: another stage production, maybe one or two more movies, one more season of American Horror Story...and then that is it for me. Because I think that's enough. I want to go out with a bang...or should I say, a scare?"
Though the veteran actress has plenty of movies under her belt, AHS provided a dose of shock therapy to a career largely centered in the 1980 and '90s. "It reenergized me; it reenergized my career," Lange told the Times. "There's no shame in recognizing that. It's exposed me to a whole new generation, which is a little strange. I'm not used to young people thinking I'm cool." Did she not read the headlines after her performance of "The Name Game" last season?
Even with this news, however, there's no need to panic yet. After tomorrow night, we'll only be three episodes into American Horror Story: Coven, and she promises at least one more after that. Still, we'll shed at least one bloody tear in appreciation of Lange's sinister, mellifluous Southern charm and all of the delight it's brought us. (Los Angeles Times)
Unbothered
White Supremacy Is To Blame For The Buffalo Massacre. That’s It.
A clip of CNN reporter Victor Blackwell breaking down in tears live on air while talking about last weekend’s horrific massacre of 10 Black people in a B
by Kathleen Newman-B...
Unbothered
Megan Thee Stallion’s Bombshell New Interview Reveals Devastating...
In July 2020, Megan thee Stallion was involved in an intense police stop after attending a celebrity pool party in Los Angeles, leading to the shocking rev
by Ineye Komonibo
Unbothered
Ari Lennox Shares An Update After Her Amsterdam Arrest
Updated December 2, 2019: Days after being detained at Schiphol Airport in the Netherlands, Ari Lennox has resurfaced on social media to give worried frien
by Ineye Komonibo
Advertisement
Unbothered
Two Men Convicted For The 1965 Assassination Of Malcolm X Have Be...
Nearly 60 years after the shocking assassination of civil rights leader Malcolm X, a new development in the investigation into his murder has led to t
by Ineye Komonibo
Unbothered
The Zombification of Whitney Houston
In Haitian mythology, the idea of what we now call zombies emerged from enslaved Africans’ deepest fear: not even death would bring freedom. Though suici
by Brooke Obie
Unbothered
Actually, Netflix, Content Like Dave Chappelle’s Transphobic Come...
Update: Netflix has fired the employee who was organizing an upcoming walkout (set to happen Wednesday, October 20) of trans staffers and allies in protest
by Kathleen Newman-B...
Unbothered
Years After Her Death, The Science Community Is Still Treating He...
In the 1950s, a Black woman named Henrietta Lacks walked into Johns Hopkins Hospital to be treated for cervical cancer, and her cells would go on to b
by Ineye Komonibo
Somos Libres
Why Black Puerto Rican Women Are Leading an Anti-Racist Media Ren...
While the 2020 Census was essential to many communities across the United States, it held a different meaning for Puerto Ricans. Battered after a decades-l
by Frances Solá-Sant...
Unbothered
R. Kelly Facing Life In Prison After Being Found Guilty Of Racket...
This story contains discussion of sexual violence. Please proceed with care. Updated September 27, 2021: Months after being charged and indicted for nine g
by Ineye Komonibo
Unbothered
Jennifer Hough’s First On-Air Interview About Nicki Minaj &...
*Editor’s note: this story contains discussions about sexual violence, threats, and intimidation. Please read with care.  A month after publicly all
by R29 Unbothered
Unbothered
CBS Will Now Turn Its Controversial Activist Competition Series I...
Updated September 16, 2021: After a wave of backlash followed the announcement of its controversial new series, CBS is going back to the drawing board to r
by DarkSkyLady
Unbothered
Megan Thee Stallion Wins Two Big Legal Victories — Against Her La...
Megan Thee Stallion scored two major legal wins this week, after a judge granted her the go-ahead to release the remix of BTS’ Butter that she is feature
by Tayo Bero
Advertisement
Advertisement
Discover
R29 Stories & News
Watch
R29 Original Series & Films
Shop
R29's Most Wanted