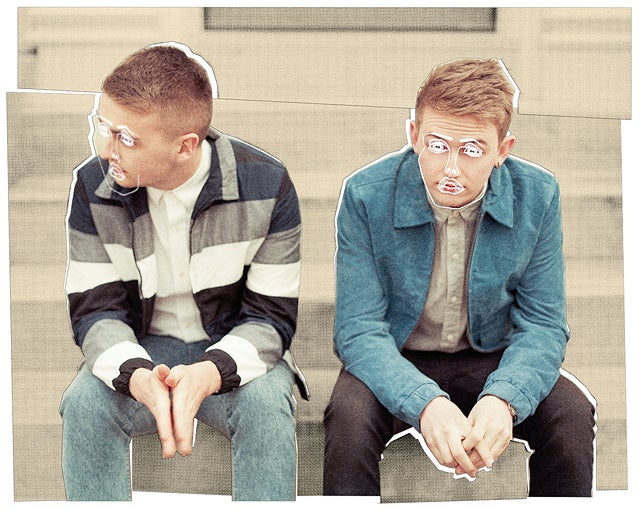 Photo: Courtesy of Shae De Tar. Illustrated by Ammiel Mendoza.
To say that brothers Guy and Howard Lawrence are having a good year is a massive understatement. It was only last October that Disclosure's Sam Smith-featuring single "Latch" broke out from the dance world and began climbing the charts. Then, just over six months later, its first LP, Settle, debuted at number one on the U.K. charts. Now, the band is off on a world tour that will see it through 2014. Not bad for two dudes born in the '90s. We caught up with Guy before a gig in San Diego to talk the duo's meteoric rise, favorite collaborators, and the moment they made it.
Advertisement

Show of the Year
"Oh, wow that's a big question. Well, we've done 47 festivals this year. Glastonbury was amazing. We grew up our whole lives watching that one on TV. We had a really good show, too, so that made it even better. Oh, man, I can't tell you how many shows we've played this year…it's such a hard question to answer. In the U.S., we played Red Rocks. I mean that, as a place, was really amazing! I want to go back and do our own headlining show there. We did a really good show in New York as well as in Central Park. Such a legendary place. That was definitely up there."

Brotherly Love
"If we were like normal brothers and got in fights all the time, I think it would suck. But, we're not, you know. We're kind of just really good friends. Sometimes I forget he's even my brother, only I get reminded every day in interviews [laughs]. But, yeah, he's more like my best mate. We get along fine. We wouldn't have started the band if we didn't get on."

Key Collaborators
"We're probably closest with Sam Smith and Jessie Ware. I mean, we hang out with them loads just as friends now. We probably have the most banter in the studio. But, we don't work with anybody we don't like. That's a really important part of it. If we have a day and we don't get along with them, we won't work with them again. It doesn't matter how good they are if it's no fun. But, everyone on the album, we love. We're either massive fans of their music or really good friends, or both."

Making It
"'Latch' was the first bit of commercial success that we had in a big way. We got a lot of regular radio play, and it charted quite highly in the U.K., which was great. That was the first moment we were beginning to connect with a wider audience rather than just as DJs in the club scene. But, yeah, when the number-one album happened, it was just leaps and bounds…it was just jumping bigger and bigger. Ever since then it's been nonstop."

Nostalgia, Ultra
"We're going to keep touring, doing bigger and bigger shows. That's all we're concentrating on at the moment — making the shows as good as we can. We can draw a much bigger crowd now, which is great. It's a very balanced crowd, too, which is nice. There's a good mix of boys and girls and quite a big range of ages. They're obviously a lot of kids, but we get Tweets from people who are in their late 30s, early 40s who'll come down with their mates. I think they get this proper nostalgia about our music, you know. If they're old ravers or into house music, they'll want to come down, because it reminds them of that. That's been a really positive thing."

Unbothered
We Hate To See Insecure Go, But We Love To Watch It Leave
When Issa Rae’s viral web series The Mis-Adventures of Awkward Black Girl came to an end in 2013, fans of the YouTube project were devastated, wondering
by Ineye Komonibo
Unbothered
Danielle Pinnock Has Arrived
When Danielle Pinnock took her first steps into the entertainment industry almost 20 years ago, the space wasn’t exactly welcoming. Even in the early
by Ineye Komonibo
Entertainment News
Tinashe Lets Go Of The Past With A New Album & No Limits
After years of being limited by other people’s expectations, Tinashe is finally soaring on her own.
by Sarah Osei
Advertisement
Unbothered
Solange Joins The Black Book Revolution With Saint Heron’s Free C...
Since 2013, Solange Knowles’ Saint Heron creative studio has been a beacon of Black culture, one that has preserved our legacy while allowing today’s t
by Stephanie Long
Unbothered
Actually, Netflix, Content Like Dave Chappelle’s Transphobic Come...
Update: Netflix has fired the employee who was organizing an upcoming walkout (set to happen Wednesday, October 20) of trans staffers and allies in protest
by Kathleen Newman-B...
Unbothered
Shalita Grant’s Sherry Is The Best Part Of You Season 3 ...
This story contains spoilers for Netflix’s You Season 3.  When we first meet Shalita Grant’s character Sherry Conrad on Netflix’s hit series You, sh
by Kathleen Newman-B...
Somos Libres
Black Women Carry Reggaetón’s Foundation; Let’s Ensure They Reign...
“Our music, regardless that we have more feminine presence, is still ruled by the guys,” Ivy Queen, beloved Puerto Rican reggaetón pioneer and host of
by Ecleen Luzmila Ca...
Entertainment
María Isabel Finds Her Strength in Soft Bilingual R&B
María Isabel has mastered the art of songwriting. You can hear it in her sophomore EP, i hope you’re very unhappy without me. Through the eight-track pr
by Brenda Barrientos
Unbothered
Well-Read Black Girl & R29Unbothered Present The Black Love Readi...
by R29 Unbothered
Unbothered
Netflix Wants You To Join Its Book Club & Is Throwing In Uzo Adub...
From Bridgerton to A Series of Unfortunate Events to Shadow and Bone, many of Netflix’s exciting original offerings are adaptations of equally popular li
by Ineye Komonibo
Unbothered
Why Are We Fighting Over The Next Bond? Lashana Lynch Is Right There
This story includes spoilers from No Time to Die. After being delayed for more than a year due to the ongoing coronavirus pandemic, No Time to Die has fina
by Ineye Komonibo
Unbothered
Phoebe Robinson’s Tiny Reparations In The Publishing Industry
It’s almost absurd to think that Phoebe Robinson — a successful comedian, author and actress of 2 Dope Queens fame would have difficulty selling her fi
by Stephanie Long
Advertisement
Advertisement
Discover
R29 Stories & News
Watch
R29 Original Series & Films
Shop
R29's Most Wanted